The lost dream of a Common European Home 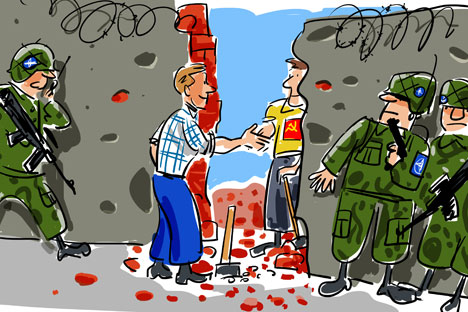 Expert Fyodor Lukyanov remembers the heady days after the fall of the Berlin Wall and reflects on what has happened in the 25 years since Mikhail Gorbachev hoped for a united Europe. 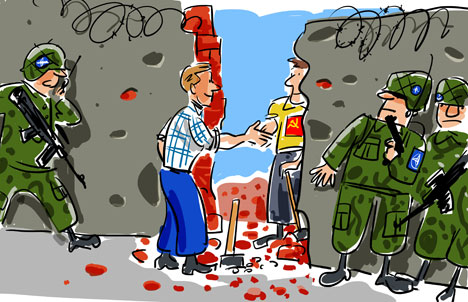 It's the morning of November 8, and I jump out of bed like a scalded cat when I realize I’ve overslept. Small wonder, since I’d been up late writing the text of my presentation for a conference on the 25th anniversary of the fall of the Berlin Wall. Tomorrow, editors of analytical journals from all over the world – from Lisbon to Reykjavik, Vladivostok to Busan – will gather at a newly opened complex on Potsdamer Platz with the slightly old-fashioned name of Common European Home. This “home” long ago became a common Eurasian one, but the builders decided to name the complex after Mikhail Gorbachev’s original idea.

I immediately head for the train station keen not to miss the express from Moscow to Berlin. Since this high-speed train route opened six years ago, I almost never fly to Europe; there’s no point. It’s better to spend six hours in a comfortable train that goes through Smolensk, Brest, and Warsaw and delivers me to Berlin Central Station than to trudge to the airport, wait, and from there leave the airport… Oh, what’s that sound?

Suddenly I wake up as the radio on my Chinese Lenovo alarm switches on. It was all a dream. The gloomy morning resonates with the news. Shelling in Donetsk again, peaceful civilians killed. David Cameron has threatened Russia with new sanctions. Nato exercises have begun in the Baltics…

The Common European Home might remain in my dreams, but the forthcoming real-life celebration of the 25th anniversary of the fall of the Berlin Wall, rather than emphasizing the old world’s unity, actually stresses its new division. What went wrong? Why has the Europe without dividing lines – the Europe that people dreamt about during the years of “new political thinking” – been lost?

The Berlin Wall symbolized the absurdity of ideological confrontation. With its destruction, it seemed that any reasons there may have been for division were also erased. But it turns out that while there is a common understanding of this, everyone has a different view on the way out of conflict.

Gorbachev believed that “engineers” from the two former camps would design the Common European Home together, that they would build a structure in which everyone could live comfortably, because it would take everyone’s wishes into account. In this sense, Gorbachev probably unwittingly followed the logic of his great associate (at certain points) and antagonist (at other times) Andrei Sakharov in calling for the convergence of capitalism and socialism. In practice, however, convergence was substituted for absorption.

The West interpreted the collapse of the Soviet Union and the crash of the Soviet model as proof of its unconditional correctness – moral, historical, and economic. What was supposed to be a gradual, balanced convergence and the creation of a new quality turned into the carving up of the “Soviet legacy”. The method of building a Common European Home on western patterns could have been realized only if that process had been shared with Russia after the collapse of the Soviet Union. That is where it fell apart: it was difficult to halt the destructive impulse released after the disintegration of the USSR. Russia and its parts would probably eventually have been digested by the European integration project in some form or another. But that didn’t happen, and Russia proved to be an obstacle in the way of the victorious march of the Western project. The European Union did not know any other way than to pursue the bilateral dissemination of its legal and regulatory field into neighboring countries; it’s simply built that way.

The West could not recognize Russia as an equal co-creator of the new Europe. Nor did Russia agree to a subordinate role.

As a result, instead of building a Common European Home, which would eventually have become a Common Eurasian Home, the West began the process of enclosure. It expanded the structure that the western Europeans built during the Cold War with the active aid of the United States, and then it started to build auxiliary structures. Sooner or later, this work was supposed to stretch to the neighboring area, the wall of another building, which Russia undertook to restore and reconstruct as it gradually recovered from the collapse of the early Nineties. And a moat has once again appeared in Europe – a ditch moved east compared with the one that divided the continent 25 years ago. But to some degree it is even deeper, because it is a division not so much in ideology as in cultural and historical differences and mismatched mentalities.

Playing its own game: Belarus as a peacemaker between Russia and the West

Was there actually a chance to construct a real Common European Home? If the Soviet Union had been preserved – not as a communist empire, but as a reasonable commonwealth – Europe could have united on truly equitable principles. Integration could have stood on two pillars: Brussels and Moscow. And the fruit of convergence would have been a qualitatively different structure in which energy supplies would never have caused crises, democracy would not have been accompanied by complete deindustrialization (as in the Baltics), and the inhabitants of the eastern part of this enormous space would not have filled the market with a cheap, illegal workforce for its western part. And of course, there would be no issue of the remilitarization of central Europe and renewed threats to European security 25 years after the fall of the wall.

Perhaps this is utopian; it was already too late when the decision was made to create a Common European Home. The USSR had reached the point of no return, and its Western opponents were not interested in agreements once they sensed the possibility of certain victory. If that is the case, then the Europe that we lost can exist only in the minds of idealists, where it will remain forever, juxtaposed with the image of the incredibly touching shots of late autumn 1989, when thousands of happy Berliners were jubilant to see the wall come down and truly believed that it would never come back.

Fyodor Lukyanov is the editor-in-chief of Russia in Global Affairs and chairman of the board of the Foreign and Defense Policy Council.

Read more: How it feels to lose your country