Playing by the rules and without rules 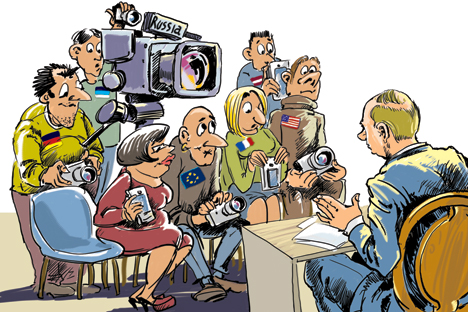 Vladimir Putin has been taking on an increasingly confrontational tone toward the United States in the last few years in his speeches. The Russian president openly disputes the legitimacy of the role of the U.S. and frequently refers to the need for a multipolar framework as an instrument for global policy. Is there a coherent philosophy and strategy behind Putin’s approach, and if so, what is it?

The speech that Vladimir Putin gave at the end of last week at the Valdai Club [an annual discussion forum at which international experts debate the role of Russia in global affairs – RBTH] was judged to be very harsh by most commentators. If we were to exclude a couple of scathing metaphors, such as "master of the taiga" (referring to Russia) and the geopolitical "nouveau riche" not being able to deal with the enormous wealth cast upon them (referring to America), in essence the speech was more that of an analyst rather than a publicist. Then why such a reaction?

The fact that the Russian president does not accept contemporary American policy is no news. He has been speaking about this for the last several years. It is just his tone that has changed.

During his first presidential term, Putin invited America to review its course, because common threats outweigh the contradictions. During his second term he warned that Russia would not allow for its opinion to be ignored. During his 2012 electoral campaign Putin was perplexed, trying to understand Washington's policies, which appeared to be purposefully destroying the international order, rather than strengthening it.

In this year's Valdai speech there was a touch of fatalism in the president’s tone. He no longer counts on the U.S. to change, and simply proclaims the destructiveness of its activities. Perhaps it is this lack of expectations that has created the biggest effect and made people interpret his speech in an exclusively negative light.

Meanwhile, Putin's core undertaking is rather positive, since it echoes the principal theme of the Valdai meeting: the search for new rules of international intercourse, which would permit everyone to move to another phase of development. The world is still going through a phase of virtual erosion and now even through a phase of a quick disassembly of the world order that was created in the second half of the 20th century.

The construction of the new world order, which was spoken about profusely 25 years ago, has not led to success. If the process began as the aspiration of two superpowers to find a common model (this order was envisioned by Mikhail Gorbachev, who was the first to mention it), then with the collapse of the USSR the only remaining ‘architect’ is the U.S. However, the U.S. has not been able to manage world processes; actually the opposite has happened.

For the sake of fairness it must be said that the desired multipolar world that is evolving today does not promise order or harmony or equilibrium. Moreover, as the Russian president said, this multipolar world is only exacerbating global anarchy, since more and more players are now appearing, but there are still no rules.

The thing that separates Vladimir Putin from leaders of other important countries is that he not only condemns and criticizes America's policies (although not many leaders do so), but he systematically denies its role. And this provokes the biggest reaction. After the Cold War the U.S.'s world domination became a self-evident truth and any transformation of the global order was viewed as a technical correction of this position, not its change.

Theoretically, everyone knows, of course, that there are no eternal hegemons. Charles Krauthammer, who in 1990 introduced the concept of "a moment of unipolarity," that is, a period in which America could do whatever it wants, also warned that this would not last forever. He actually foresaw the duration of the "moment": 25-30 years. But in practical terms America's superiority was, and is, so great that other models with which Washington could have been ‘one of’ or even ‘first among equals’ were not taken into consideration.

Strictly speaking, the U.S.'s bluntly negative view of what Putin is saying and doing is justified. Washington thinks that the Russian president consistently casts doubt not on its policies, but on its special rules. Or rather, he is recreating the classical situation in which a contender issues a challenge to the hegemon, intending to grab world superiority. Consequently, this contender must be restrained; he must not be allowed to strengthen himself.

The paradox is that Putin constantly says that Russia does not want global domination, it is not seeking to shape the world to itself and it will not enter a race for greatness. This point was made in the Valdai speech, as well as in Putin's other appearances. The Russian president has a very realistic idea of his country's potential: no less than it is, but not any greater.

U.S. claims victory in Cold War, wants to carve up world to suit own interests - Putin

However, Vladimir Putin refuses to play by America's rules - both with regard to conceptual declarations and on a practical level. Russia's moves in 2014 - primarily the decisive actions in Crimea - demonstrate that Moscow will follow its interests independently of what others think of it.

But one other move has not been made thus far: an appeal to the rest of the world. Vladimir Putin's Valdai speech, as many others, is another conversation with the West, and first and foremost with the West.

In the new world, in the one that the Russian president depicts with such broad strokes, it is vital to engage in a profound dialogue with countries and regions that do not oppose the West, with those that are simply not part of it. The discussion about new rules cannot be conducted along the lines of the former, Cold War opposition. The world is more democratic today and the outcome of the global process depends much more on the ‘vast world masses’. It is there that the agitation should be carried out.

The author is Editor-in-chief of the journal Russia in Global Affairs.