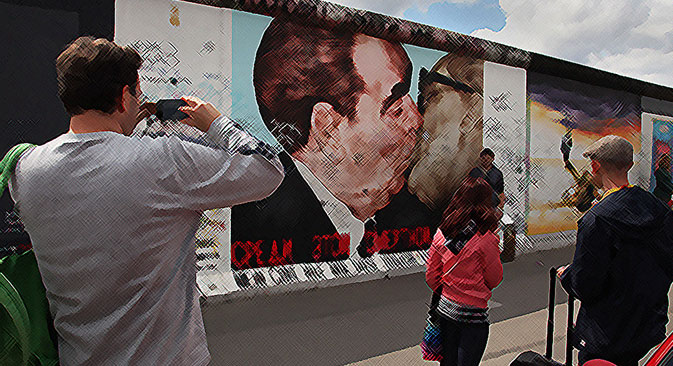 On Nov. 9, 1989, the wall that separated Berlin into western and eastern parts had been demolished. Source: DPA / Vostok Photo

The fall of the Berlin Wall and the unification of Germany is not only the elimination of border structures belonging to two German countries. This event had and still has an enormous impact on the geopolitical situation and on the minds of people.

In November 1989, I was a journalist for the Komsomolskaya Pravda newspaper specializing in German issues. On the eve of the fall of the Berlin Wall, I went to Starya Ploshad in downtown Moscow, the location of the Central Committee of the Communist Party of the Soviet Union, and met an old acquaintance, Nikolai Portugalov.

Nikolai had worked in Bonn as a correspondent at the Russian Embassy in West Germany under Ambassador Valentin Falin. Nikolai was well received by all the high-ranking officials, both in Moscow and in Bonn, and was later invited by Falin himself to join the international department at the Central Committee of the Communist Party.

That night, we discussed the evolving situation - the mass flight of East German citizens through Hungary and Czechoslovakia and the tensions related to the protests in East Germany. Nikolai did not conceal the fact that he was surprised by the developments in the Central Committee.

The Soviet silence on the fall of the Berlin Wall

In his view, given the conditions, even the Soviet tank army stationed in East Germany at the time would not have been able to help the Socialist Unity Party of Germany save the situation even if they had been called in to suppress the mass protests in Leipzig and other East German towns. It was these protests that, in the end forced, East German leader Erich Honecker to resign.

Actually, the fall of the wall was caused by a number of reasons. Among them was the desire of the divided German people to live in one country, as well as socialism's defeat by capitalism. However, the decisive role was played by the Soviet leadership headed by Mikhail Gorbachev, who chose to stop the confrontation with the West and reform the socialist system.

The prerequisites for the fall of the wall were created in the Soviet Union by Gorbachev and his team, although they had a different goal in mind for the changes they put in place – the improvement of the socialist system. However, the changes, which became known as Perestroika, had an effect not only on the Soviet Union, but on all the socialist countries of Eastern Europe, primarily Poland and Hungary.

The Polish and Hungarian governments introduced more ample and deeper reforms than Gorbachev's team ever dared to, including the creation of a pluralistic society and freedom of movement for its citizens and citizens of other countries. In East Germany, however, Honecker tried to preserve the existing order. All this led to the end of the arms race and the reduction of tensions on the European continent. And the embodiment of this process was the fall of the wall.

“For his leading role in the peace process, which today is an important element in the international community,” in the words of the Nobel Committee, Gorbachev was awarded the Nobel Peace Prize in 1990.

For Russians, the fall of the wall became not only a symbol of the elimination of military-political blocs and the end of the Cold War, but also a real extension of rights. The great breakthrough was the unimpeded possibility to cross state borders. Soviet citizens were subjected to severe restrictions on their movements, and as a result, the Iron Curtain existed not only on the borders, but also in people's minds. In the 1990s, millions of former Soviet citizens were able to travel abroad and see the capitalist world, with all its merits and faults, with their own eyes.

Opinion: The lost dream of a Common European Home

And yet, in Europe not all the hopes embodied in the fall of the Berlin Wall were fulfilled. Essentially, the European continent entered the new century wrapped in dramatic contradictions. There are many reasons for this.

The unification of Germany was made possible thanks to the good political will demonstrated by the leadership of the Soviet Union. But it turned out that this good will was not reciprocated by Western leaders. Many Kremlin politicians of the era maintain that Moscow agreed to German reunification on the condition that western countries would not expand NATO eastward. In 2009, Gorbachev told the Bild newspaper that, German Chancellor Helmut Kohl, U.S. Secretary of State James Baker and others assured him that NATO would not move east.

“The Americans did not keep their promise, whereas the Germans were indifferent. Maybe they were even satisfied with how easily they fooled the Russians. And what did this give us? Nothing. Only that now Russians no longer believe the West's assurances."

The West denies this, and indeed there are no corresponding documents from the time to back up either claim.

In April 2014 NATO published an information bulletin that read: "Russian officials claim that U.S. and German officials promised in 1990 that NATO would not expand into Eastern and Central Europe, build military infrastructure near Russia’s borders or permanently deploy troops there. No such pledge was made, and no evidence to back up Russia’s claims has ever been produced. Should such a promise have been made by NATO as such, it would have to have been as a formal, written decision by all NATO allies."

Moscow does not take this declaration seriously and insists that a gentlemen's agreement was broken and that NATO's expansion poses a threat to Russia, especially following NATO's operation in Kosovo and the gradual extension of the West's influence on the countries of Ukraine, Moldova and Georgia.

In 2007, at the 43rd annual Munich Security Conference, Russian President Vladimir Putin announced that NATO's expansion to the East "has nothing to do…with guaranteeing security in Europe." On the contrary, in his words, it reduces the level of mutual trust between countries.

"And we have the legitimate right to ask: against whom is this expansion?" said Putin. He explained that the expansion of NATO's military infrastructure to Russia’s borders is in no way related to "overcoming world threats” – terrorism first and foremost. Putin reminded the conference attendees that after the dissolution of the Warsaw Pact, the Secretary-General of NATO guaranteed the Soviet Union’s security, saying that the alliance's forces would not be deployed beyond the borders of West Germany. "Where are these guarantees?" asked Putin.

It is up to historians to determine who is right and who is wrong, but today it is obvious that Moscow sees a direct connection between the current tensions in Russia's relations with the West and the processes that followed the fall of the Wall: the Balkan Wars, the operation in Kosovo and NATO's expansion to the East. The culmination of this is the Ukrainian crisis, which may lead to the appearance of a new dividing wall in Europe - this time on the border between Russia and Ukraine. 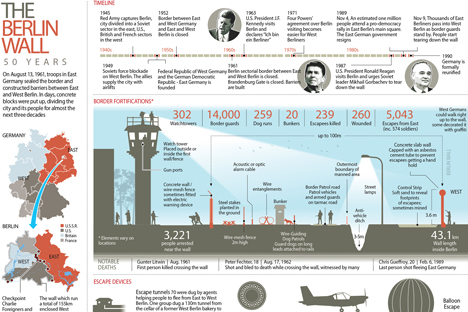