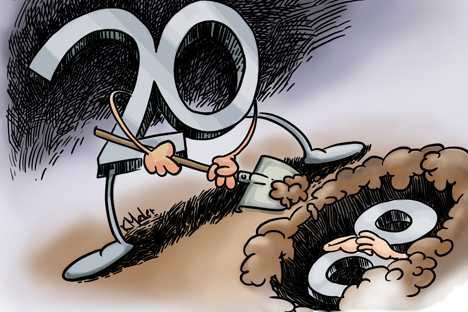 Although the upcoming G20 summit in Brisbane is likely to be tense, with host nation Australia unequivocal in its criticism of Russia, this international institution nonetheless offers more balance than other more Western-oriented international groupings such as the G8. For this reason, argues Fyodor Lukyanov, Russia should make the G20 a priority.

Another high-level G20 summit will take place this week in Brisbane, Australia. Dramatic events surrounding Ukraine, the disappearance of the G8 and the brusque, nearly impolite, announcements made by the hosting country in Russia's direction have forced us to view this "twenty" through the prism of the Ukrainian conflict. Meanwhile, with all the significance that the conflict has for global politics, in the end it is just an episode in the process of the formation of a new world order - in which the "twenty" is capable of playing a conspicuous role.

In the last several years this international forum has attracted a great deal of attention. Compared to traditional institutions, which have difficulty adapting to fast changes in the international situation, the G20 is a new structure, created especially for responding to contemporary challenges. It obviously does not have a universal legitimacy, similar to that of the UN, and it does not rely on a formal charter and on membership criteria. However, its composition is representative and the member governments are not only influential and economically prosperous, but are also diverse and are not united by only one type of culture or ideology.

Alexander Grushko: Ukraine was pretext for NATO to resurrect itself

Last year Russia chaired the G20 and everyone agrees that Moscow carried out its task successfully. The climax was the meeting of the leaders in St. Petersburg. Shortly after the conference it became known that the important consultations had helped prevent a new war in the Middle East and find an elegant solution to the problem of Bashar Assad's chemical weapons. Vladimir Putin played a key role.

Today, however, last year's events now seem to have taken place in a distant past. The Ukrainian crisis has shaken up world politics and Russia, which was supposed to head the G8, was isolated from the forum.

The summit in Australia will surely be tense. A series of countries will attempt to demonstrate their opposition to Russia, while others will point to the necessity of taking mutual action to stimulate the world economy and, obviously, to the importance of avoiding steps that will, on the contrary, push it towards recession.

Be that as it may, the "twenty" is closer than any other organization to becoming a prototype of the new levers of global regulation. The G20 must be a priority for Russia, because this institution has a format in which Moscow will never be alone. Work in the more usual Western-oriented configurations is not very efficient today. We can argue about why it happened, but the point is that Russia does not have any support in the West. The G8 was formally suspended because of Crimea, but essentially because Russia had long been considered a foreign element. The experience of the Russia-NATO Council and even that of the OSCE (with all the heterogeneity and instrumental usefulness of this organization) reproduces a complex picture: Russia on one side, the rest on the other.

Something similar cannot happen in the G20. The heated debate about Syria in 2013 demonstrated a split, exactly in the middle, in support of the American and Russian approaches. The presence in the G20 of very influential countries that do not follow Washington's lead (mainly, but not only, the BRICS nations: Brazil, Russia, India, China, and South Africa) creates room for maneuvering and forming coalitions. Russia would therefore like the G20, which was born as a platform for discussing the global economy, to officially turn its attention to politics, since politics today has a decisive impact on the economy. And a more balanced set of countries than the ones found in the G20 still does not exist, and probably will not appear for a while.