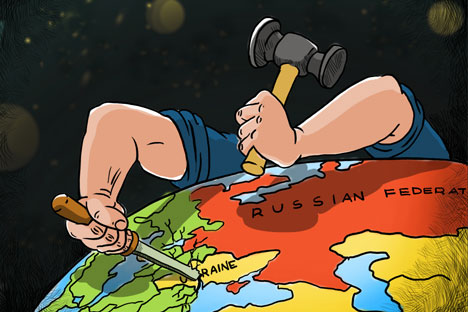 With Russia and the EU still trading barbs over the crisis in Ukraine, analysts from leading international think tanks are due to meet in London today to discuss the challenges for 'Cooperative Greater Europe'. Russia foreign affairs expert Ivan Timofeev, explores three major obstacles and ways to overcome them.

Click to enlarge the image. Drawing by Dmitry Divin

The idea of “Greater Europe” has been on the political agenda since Soviet leader Mikhail Gorbachev first set the tone in the late 1980s. After the end of the Cold War, the idea that Europe now stretched “from Lisbon to Vladivostok” seized the imagination of both politicians and diplomats. The notion envisaged the integration of Russia, post-Soviet and Warsaw Pact countries into a single community with Western Europe.

“No more dividing lines!” was a key slogan of Greater Europe. At its core were shared values, political interests, economic interdependence and humanitarian cooperation. Lofty ideas of the coexistence of sovereignty and national interests with a level playing field in security, trade, human rights and economics abounded.

For today's Russian and western politicians, these ideas seem utopian. Pragmatism and a reliance on real interests and capabilities are back in fashion. "No more masquerading. It’s time to look truth in the eye and admit there is no such thing as Greater Europe with Russian participation," they would claim.

The crisis in Ukraine seems to have put paid to the brave idea, although many would argue the die was cast long before Maidan. The difference between now and the days of the Iron Curtain is that the demarcation lines have shifted eastwards. Ukraine is a lot closer to Moscow.

It represents a tragic loss of even the theoretical possibility of resolving differences between Russia and the West. Relations are now radicalised, tainting even those areas in which cooperation has been successful. A year ago, the window of opportunity was narrow but still open. Now it has slammed shut indefinitely.

What we now see in Europe and Russia is a myopic, hand-to-mouth response that gives no thought to the future. All parties stand to lose: Russia, the EU and the post-Soviet space. Torn apart by contradictions, they will lose global competitiveness and pay a high price for mutual containment.

Rejecting the idea of Greater Europe only widens the chasm between Russia and the West. Paradoxically, despite the gulf in visions, it may represent the only hope for future rapprochement. A pragmatism focused on closer cooperation is better than the short-term, knee-jerk reactions that currently fuel political decision-making.

There are three major obstacles to the Greater Europe project.

Both sides view each other as potential adversaries. NATO expansion ignores Moscow’s concerns. New initiatives in conventional arms control have ground to a virtual standstill. Local conflicts are not resolved jointly; at best they are left suspended in stalemate. The system of strategic stability has degenerated. Nuclear deterrence remains a key guarantor of security, at least for Russia. There are mutual moves to military rivalry. Rather than using each other as “safe backyards” and resolving common problems, a costly new arms race is looming.

Another tripwire is the dismal trend in economic development and humanitarian cooperation. This area looked more promising, but here, too, progress has largely run its course.

Energy cooperation has become a political minefield, as witnessed in Russia's recent refusal to go ahead with the South Steam gas pipeline, blaming European intransigence over anti-monopoly rules of its Third Energy Package. Economic and humanitarian integration has ground to a halt. We are witnessing the rapid erosion of economic interdependence between Russia and the EU. Sanctions have curtailed interaction or increased transaction costs. The EU’s energy security has suffered. Russia is losing access to technologies and investment. Relaxation of visa regimes has been put on ice. Cooperation in education and science is under attack.

The third issue is that the post-Soviet space is being split along new dividing lines. The choice was once between Western and Russian projects. But institutions and formats that could have brought harmony to these processes failed to materialise.

Though long evident, all these challenges have been exacerbated by the conflict in Ukraine. What was essentially a local crisis has shaken the entire system of relations between Russia and the Euro-Atlantic community to its core.

Where do we go from here?

The Treaty on European Security should be revisited and the OSCE reformed to reflect the principle of common and indivisible security. All diplomatic means must be rallied to bring about a ceasefire in Ukraine, start constructive talks between combatants and establish multilateral intergovernmental consultations on European crises. Sabre-rattling must be scaled back: no more dangerous approaches by military aircraft and naval vessels, exercises and maneuvers.

Joint mechanisms must be agreed for humanitarian aid for the Ukrainian regions and economic assistance for the country as a whole. Politics must not be allowed to interfere in education, science and other areas of humanitarian cooperation. There should be multilateral security guarantees for the countries of the former Soviet Union, including a multilateral rapid response mechanism to deal with crises.

A fundamental new agreement governing relations between Russia and the EU is needed and one that draws not just on politicians and diplomats, but top experts from the leading think tanks of both.

Read more: The lost dream of a Common European Home