How to ease traffic jams? 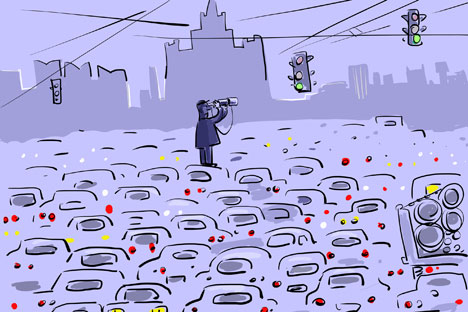 If the Moscow authorities want to combat traffic jams they must make public transport faster, cheaper and as comfortable as a private car.

According to navigation systems producer TomTom, Moscow has some of the worst traffic jams in the world. The Moscow authorities have been trying to address road congestion for at least 15 years, but the situation is not improving. Why?

Unlike many foreign cities, Moscow began facing the problems caused by mass motorization only in the 2000s. And those problems were dramatic. Cars were considered a luxury in the Soviet Union.

In 1982, only 5 percent of Muscovites were able to afford one. That number rose to 18 percent in 1997 and to 30 percent by 2000. Such rapid growth led to serious problems with infrastructure.

In the Soviet era, Moscow’s infrastructure was designed with an eye toward maximizing the effectiveness of public transportation. Relatively few large roads were constructed, while many bus, trolley bus and tram routes were built along with a very high quality subway system.

Additionally, there was no culture of driving or of pedestrians and drivers living together. Because of this situation, when cars began to flood the city, they took over every available free space. Cars were parked (and sometimes driven) on sidewalks and in playgrounds and yards. Congestion and traffic jams increased each year.

It would have made sense for the Moscow authorities to learn from the experience of American and European cities in developing proper infrastructure for cars before the problems with traffic became acute. But they did not.

The key mistake transportation authorities generally make when trying to address traffic problems in cities is to pour money into constructing more and bigger roads in an attempt to clear traffic jams.

This is what happened in the United States, which confronted the problem of large numbers of private cars earlier than most countries, starting in the 1930s. Experience and the subsequent development of transport-related science have shown that this plan leads to a dead end. More roads only create more places for cars to get into traffic jams.

Even if municipal authorities could build roads and parking lots capable of holding all the cars that could possibly be driven in a particular city, they would create other problems. Investment in road construction would be enormous; the roads would take up too much space; and drivers would be no closer to where they needed to go.

Additionally, the problem with such cities — and one that many Americans cities struggle with today is that the only convenient way to get around them is by car. The distance to the center is too far on foot, and population density is too low for public transport. Buses must either stop at every corner and move too slowly, or the distance between stops is too far.

The more the city authorities try to build roads, the more complicated it becomes to live in the city without a car and the more compelled residents feel to buy one, What results is a vicious circle.

People who live in cities take four factors into consideration when deciding how to get around: comfort, cost, convenience and speed. Most Muscovites can afford a car, even if it is an inexpensive or used one, at the current average monthly income level. The percentage of people who choose to buy a car, therefore, depends on the convenience of traveling in one as opposed to on public transport.

If the Moscow authorities want to combat traffic jams they must make public transport faster, cheaper and as comfortable as a private car.

Unfortunately, Moscow has not invested in improving public transportation in these ways. Instead, the city has spent money to build roads and interchanges. That has only exacerbated the road congestion problem with each passing year. In addition, car use has not been restricted at all. Until 2013, parking was free everywhere, even in the city center. People were able to park their cars virtually along the Kremlin walls.

At the same time, tram routes have been eliminated and metro construction has been stalled. The situation became so bad that in 2010, when Moscow got a new mayor, then - President Dmitry Medvedev said: “Moscow is a model situation. It is not just the task of Sergei Sobyanin, who is the mayor, to solve this problem [traffic jams], but of the entire country. This is a sort of test of the authorities’ abilities.”

The situation did begin to improve with Mayor Sobyanin’s arrival.

Unfortunately, there is still a very strong lobby of construction companies in the city. In many cases, instead of focusing on projects that would serve the city in a positive way, these companies advocate for the construction of unnecessary roads and interchanges and the widening of streets in densely populated areas.

The moves to improve public transportation in Moscow pale in comparison with these initiatives, so, the number of traffic jams continues to rise, albeit at a much slower rate.

Max Katz is the director of the City Project foundation, which works on creating livable cities.