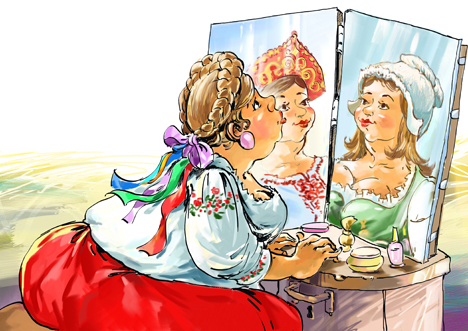 Veteran journalist shares his views on the worsening situation in Ukraine.

Despair reigns in the Donbass. The military activity with its resulting victims and heavy material losses will not change anything - a balance of power has been established, one that does not allow for the shaking up of the status quo. But at the same time no one wants to come to terms with this and fix things.

Why are Russian-Ukrainian relations, which had always been characterized as fraternal, now in this state? The conflict was provoked by the West's intention to "bind" Ukraine (without assuming any kind of responsibility), which was expressed by Kiev's signing of the EU Association Agreement. Russia rebuked [these developments] and this was enough to launch a destructive process. However, the consequences would not have been so fatal, had the potential for a national-political explosion within Ukraine, as well as between Russia and Ukraine, not been so high.

Alexander Solzhenitsyn prophetically remarked in his memoirs, which he wrote in exile long before the fall of the Soviet Union that the "Ukrainian question is one of the most dangerous issues of our future… the minds on both sides are not well prepared for it." He continued: "As it is useless to tell Ukrainians that we all descended, by birth and spiritually, from Kiev, and it is just as useless to expect Russians to recognize the fact that people beyond the Dnieper River are different. And it is the Bolsheviks who were responsible for many of the wounds and much of the discord." The writer feared that it would be “too difficult to have a reasonable conversation.”

As a staunch anti-communist, the author of The Gulag Archipelago was convinced that the socio-political model, in which the USSR bound together nations, did not form a "new historical community" and made the seeds of discord inevitable. The issue of borders could be added to the conversation as well. Soviet authorities in the interests of geopolitical expansion, the management of Soviet republics and, of course, counting on its longevity, created a prototype of Ukrainian statehood, on the scale of which even the most daring of nationalists could hardly dream.

Solzhenitsyn accurately pointed to the main problem: the conflict of identity. This is the reason for the current clash in southeastern Ukraine and the root of the tragic incomprehension between the societies of Russia and Ukraine.

Russians and Ukrainians are peoples that are very close ethnically and culturally. They are united by a common history, although this is a double-edged sword. A common history does not necessarily bring people closer. It is not a coincidence that the main demarcation line in Ukraine is one's relationship to the past, a collection of events and reflexes that mark one's national identity. It is impossible to reconcile the view that nationalists who fought alongside the Nazis were heroes along with the Soviet tradition of Victory Day.

The cultural proximity of Russians and Ukrainians along with the heterogeneity of Ukrainian society placed a "mine" under the construction of the Ukrainian state. The collapse of the USSR and the Communist Bloc in the 1980s and 1990s generated a certain type of identity: an aspiration "towards Europe" and away from "the empire." In Central and Eastern Europe, including the Baltic States, it worked, but the impulse grew weaker the farther east you went.

On the one hand, Europe itself perceived the line that divided its "legal" sphere of cultural-historical presence from that which concerned a different sense of belonging. In the minds of the majority of Europeans Ukraine belonged to the latter category. On the other hand, Ukraine never had a well-defined self-identity, similar to the Baltic States, for example. Society oscillated. The carriers of nationalist ideas lived in the west of the country, but the state’s foundation was in the rest of Ukraine, primarily its industrial east. The complexity of its design made it impossible to make a decision.

Pressure to have Ukraine make a decision has resulted in what we are witnessing now. At the same time, the crisis and the war are stimulating attempts to somehow form a national identity according to the model that didn’t work at the beginning of the 1990s, in other words, a model based on anti-Russian sentiment. This is a risky project. It evokes hostility from at least part of the population and it guarantees Russia's reaction. But there’s nowhere to retreat: the transition phase that lasted more than 20 years is over.

But for Russia the current crisis is not just another regional conflict. In his famous “Rebuilding Russia" article in 1990 Solzhenitsyn wrote about the indissoluble community of the three Slavic republics, thinking that preserving it (and not the USSR as a whole) was a prerequisite for the future of Russia.

The main thing is that Russian consciousness has not decided on its borders. I’m not talking about a formal or political sense, but mentally there is something wrong with our understanding of what belongs to our geographical realm and what does not. And Eurasian integration and the concept of a Russian civilization and the reaction to the events in Ukraine are components of the process of post-Soviet identity. And for Russia this process was particularly difficult because the collapse of the Soviet Union meant the loss of what we considered an integral part of "our country."

Our antagonistic but closely connected identities are the reason why everything is so tragic and painful. External factors and geopolitical developments are aggravating circumstances, but they are not the main ones. This is why diplomacy is not going so smoothly.