Spy games: Russia vs. U.S. in the post-Cold War era 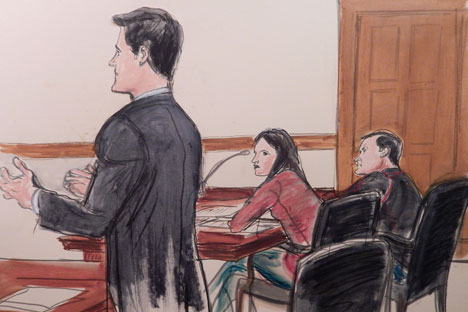 The breakup of a Russian spy ring in New York is most likely part of a broader game between rival intelligence agencies in the U.S. and Russia that has been going on for decades.

Another spy scandal has broken out between the United States and Russia — and at a time of crisis in bilateral relations of a severity not seen since the Cold War. That last detail has prompted a major reaction, perhaps more than the incident warranted.

The Russian Foreign Ministry has officially stated that it has no doubt that the charges brought by the U.S. Department of Justice against an employee of a Russian bank in New York, Yevgeny Buryakov, and other Russian citizens with diplomactic background — Igor Sporyshev and Viktor Podobny — are politically motivated. Russian politicians and experts are competing with each other in denouncing the United States, accusing Washington of stoking tension in an effort to discredit Russia and increase its international isolation.

However, it should not be forgotten that the periodic unmasking of American and Russian secret agents in recent decades have become a mutual and quite commonplace element of bilateral relations. The end of the Cold War had practically no effect on the frequency and scale of such scandals. In fact, some of the most notorious episodes occurred when Moscow and Washington were set on cooperation, not confrontation.

Suffice it to recall the exposure of GRU [Main Intelligence Directorate] Colonel Vyacheslav Baranov, who worked for the CIA (1992), CIA employee Aldrich Ames, who provided Soviet intelligence with 25 U.S. agents (1994), or the story of ten Russian spies deported from the United States in 2010 at the height of the U.S.-Russia “reset.”

Experienced spies and diplomats in interviews and private conversations see a quite straightforward explanation for this paradox. Intelligence agencies on both sides, having grown to outsize proportions over decades of bipolar confrontation, see their raison d’être in outdoing and browbeating each other. Cosmetic reforms in the post-Cold War period did little to dampen the tradition and spirit of mutual competition.

Security chiefs, always skeptical of “political games,” were guided by the principle that rivalry between Russia and the United States was of an elementary nature that no perestroika or “reset” could alter.

When it began to dawn on the U.S. and Russian intelligence communities that regular exposure of spies could cause maximum embarrassment to the other side, such exposures were made, whereupon America's Central Intelligence Agency (CIA) and Federal Bureau of Investigation (FBI) as well its Russian counterparts — Foreign Intelligence Service (SVR) or Federal Security Service (FSB) — were unlikely to reflect upon how their actions dovetailed with the political context of US-Russian relations.

A careful study of the circumstances surrounding the current spy scandal indicates that this time around we are dealing with a showdown between intelligence services, not with big politics.

First, the charges are eye-catching for their insignificance. The misdemeanors of the alleged Russian spies, which include searching online for materials on the impact of sanctions, formulating questions for news agencies, meetings and conversations with compatriots, dating women, and (the smoking gun) expressing interest in the contents of a particular secret government document, are hardly likely to shock public opinion or worsen Russia’s international image.

Second, it is well known that in such cases media attention is always focused on juicy details with the power to stir interest and attract readers and viewers. How did the U.S. Department of Justice titillate its audience? With decoded transcripts of conversations between the “spies” and SVR employees, of course.

Therein we glean information, no, not about the perfidious plans of Moscow in respect of Ukraine or some other significant political event, but about the opinion of SVR officers dissatisfied with their organization, for which the FBI’s near total neutralization of Russian intelligence inside the United States is the cause.

What other phrase from the lips of one’s opponents, delivered in a private setting, could charm the ears of American counterintelligence more? For the sake of publication in the international media alone, it was worth unmasking not three, but a dozen Russian spies, even if all they were caught red-handed delivering were umbrellas and theater tickets!

Third, there are serious doubts that the media onslaught about phone tapping, computer hacking and similar actions committed by government agencies could serve the political interests of the Obama administration, which in recent years has had its hands full fending off accusations of excessive zeal and invasion of privacy on the part of its own intelligence services. The severity of the charges against Yevgeny Buryakov & Co. are not serious enough (plus their guilt has yet to be established in court) to be used as unconditional justification for the methods employed by U.S. operatives in gathering evidence.

Fourth and finally, despite the publicly stated outrage of Russian politicians and pro-government media regarding the charges, it can be argued that no one in the Kremlin believes that the spy scandal can somehow damage Russia’s international reputation. A sure sign of this is the complete and in-depth coverage of the New York events on national TV, which repeatedly filtered out information deemed as not in Russia’s interests.

However, after granting asylum to American whistleblower Edward Snowden, Russia one-upped U.S. intelligence to such an extent that the latter needs to uncover a dozen more similar spy networks to compensate for the reputational damage suffered.

Recalling that it was the Snowden incident that led to a sharp deterioration in the personal relationship between Obama and his Russian counterpart Vladimir Putin, which then developed into full-fledged confrontation between Russia and the United States, mutual “pinpricking” by intelligence agencies does not appear to be an innocent pastime only of import within their closed communities.

In recent years the political resources of both the United States and Russia have been increasingly used to support and promote the ambitions of the leaders of intelligence organizations left over from the Cold War era, sometimes to the detriment of the two sides’ national interests.

This latest relapse in the treatment of spy mania, at a time of crisis, threatens the well-being of Russians and Americans at a time when we can hardly afford to turn the clock back half a century.