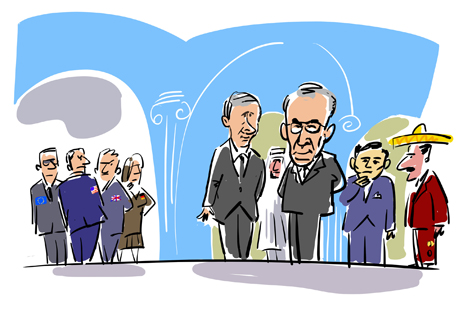 The world should not hold its breath for a simple resolution to the confrontation that has arisen between Russia and the West over Ukraine – beyond the struggle for influence over Ukraine’s destiny lies a deeper ideological conflict. Moscow has issued a challenge to the U.S.-led unipolar model that has dominated global geopolitics for the last 25 years, and there is too much at stake for either side to back down.

The whole world is watching to see how the confrontation in Ukraine will end. It is not just a confrontation between Kiev and the Donbass separatists but a narrative on a much larger scale. In effect, Moscow has challenged the system of international relations that was established after the Cold War.

Unlike with the Yalta treaty at the end of World War II, there were no agreements signed to record the outcomes of that war. The reunification of Germany, the breakup of the Warsaw Pact and of the USSR were greeted with smiles by former opponents and soothing talk of an approaching glorious era of universal human values. At the time, there were even those who (like, for example, the German foreign minister of the early 1990s, Hans-Dietrich Genscher) said that in a couple of years NATO would also be no more.

However, these illusions were very quickly dispelled. By default, the West considered that the Cold War had ended in the victory of one side, so what was the point of talking to the “defeated” side? Moscow’s objections to “a unipolar world” seemed a manifestation of old imperial complexes. NATO was expanding to the east. After the expansion of the European Union – also to the east – numerous countries whose political leaders had built their careers on “countering Russian imperialism” appeared inside the European bloc.

In Moscow in the meantime, a growing number of representatives of the ruling class believed that it was impossible to retreat any further. When in February 2014, the technically lawfully elected president of Ukraine, Viktor Yanukovych, fled from Kiev under the pressure of street protests, the Kremlin got the feeling that “the enemy was at its gate.”

Ideally, of course, Moscow would like the war in Ukraine to end not with the Minsk agreements but with a second Yalta. However, so far it has been unsuccessful in trying to impose this scenario on the West. First of all, because the West is under the impression that Russia is too weak. Oil prices are down, and its economy is under the impact of Western sanctions. Most importantly, Moscow, it seems, has no allies. Even Kazakhstan and Belarus have refrained from approving of what Russia is doing in Ukraine and of what it has already done to Crimea.

However, the lack of allies does not at all mean that Vladimir Putin does not have sympathizers in the world. Moreover, there are many of them. First of all, China. No, Beijing will not openly take Putin’s side in a confrontation with America. However, if for Washington it is essential not to allow Putin to “win” in Ukraine, for Beijing it is important to prevent America from emerging from this situation triumphant. At the same time, China will also try to strengthen its own position by taking advantage of Moscow’s predicament. For instance, Russian government officials have already voiced a readiness to consider granting China access to majority shareholding in some strategic deposits.

Moscow has sympathizers in the Islamic world too. Iran finds it far easier to maneuver in its games with the U.S. in the Greater Middle East with the support of an anti-U.S. inclined Moscow than it would have had Moscow and Washington agreed to coordinate their actions towards Tehran.

Why Russia and the West cannot understand each other

Other Islamic regimes would prefer it to at least “dilute” the United States’ hegemony, because it is not clear what to expect from Washington. Now it supports Egyptian President Hosni Mubarak, now it welcomes the Arab Spring and the assumption of power by Islamists, now it criticizes the Egyptian military for the “undemocratic” means by which it overthrew the Islamists.

Latin America too is no longer the United States’ big “backyard.” The populist regimes that have come to power there are increasingly flirting with Moscow. Furthermore, they are looking not so much at short-term as at longer-term prospects.

Finally, becomes clear that the so-called “unipolar world” has turned out to be not as solid as it appeared in the early 1990s. Moreover, it has turned out to be less stable and reliable than the cold-war world, which was based on a balance of power and on certain rules of the game – which, overall, were adhered to. Unlike now, when the allegedly “universal rules” have only one arbiter, who sets them, monitors compliance and who can break them when it really wants to. This is clear to both Moscow and Washington. That is why the confrontation in Ukraine will not be over any time soon; it is too significant for both sides.