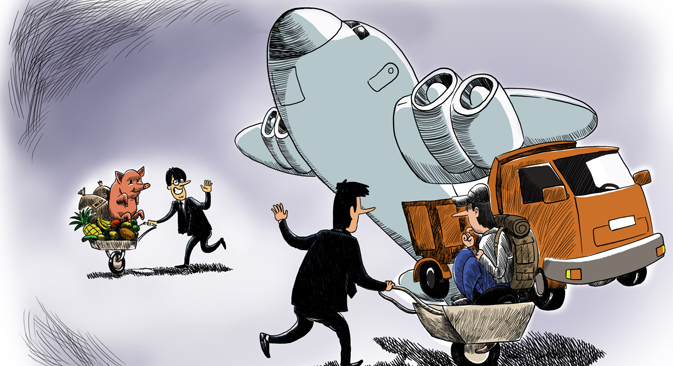 Despite the global downturn and economic troubles in Russia, trade between Moscow and Bangkok is in rude health, with the food and agriculture sectors showing especially dynamic growth. Kirill Barsky, Ambassador Extraordinary and Plenipotentiary of the Russian Federation to the Kingdom of Thailand, talks about recent successes and identifies areas for future business cooperation between the countries. 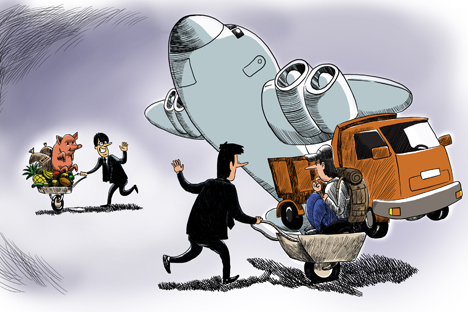 It is curious that during a drop in growth in the global economy and a general fall in business activity on the markets, the volume of Russian-Thai trade is growing. And is growing quite rapidly: Based on the results of 2014, it increased by 18.7 per cent. So what are Moscow’s and Bangkok’s economic interests?

Some time ago, I was invited to the head office of the agricultural holding CP Group. We discussed the situation with Adirek Sripratak, the president of CP Foods, one of the subsidiaries of the group, and his colleagues.

“Our company has taken the decision to broaden its investments in the Russian economy,” said Sipratak. “Now is the best time to invest in Russia and strengthen our position in the Russian market,” he said.

CP Foods is the largest Thai investor in the Russian agriculture sector. Over the last 10 years it has invested more than US$300 million in the construction of 11 piggeries in a whole range of regions: Moscow, Kaluga, Kursk, Lipetsk and Kaliningrad. Work is now under way on the construction of two more piggeries in the Moscow and Nizhny Novgorod regions. Furthermore, the largest feed production plant in the European part of Russia has been constructed near Moscow, with a manufacturing capacity of 240,000 tons a year.

But CP Foods does not intend to rest on its laurels. The company plans to diversify its business, taking into account areas such as meat processing, production of meat products and retail sales. And all of this is in Russia. The company’s policy is not aimed solely at Russian customers, but at the broader Eurasian Economic Union, which was established on January 1, 2015.

At the same time, CP Foods is increasing its supply of agricultural products to the Russian market. While the European Union countries, the U.S., Norway, Canada and Australia are trying to isolate Russia and Russian companies with sanctions, Moscow has responded by “showing them the door,” and Asian business circles have started to actively cooperate.

The food embargo against the West is a great opportunity for food suppliers from Asia to win their share of our market. How can far-sighted businessmen miss such an opportunity?

CP Foods saw its chance in the new situation: In just two or three months, the company has substantially increased the export of poultry to Russia.

The beginnings have also been laid for a new, promising enterprise – supplying pork. The ceremonial first delivery took place in mid-December 2014, in the presence of the Thai minister for agriculture.

In future, deliveries of large consignments of high-quality Thai pork will be regular occurrences.

Cooperation between Russia and Thailand in the field of agriculture is not limited to meat but also fish, seafood and tropical fruit. The biggest growth in 2014 was seen by Thai exports to Russia of rice, which more than doubled as compared to 2013.

Another promising area is the purchase of natural rubber. In Russia, there are a large number of enterprises that produce automobile and aviation tires and have expressed an interest in direct deliveries of rubber from Thailand.

This is also advantageous to local exporters of rubber – after all Russia is a reliable partner and a huge market, which is extremely important given the rapid drop in prices and stagnation on the commodity markets.

Yet another example is the largest Thai manufacturer for complete plant equipment for the sugar industry – Sutech Engineering group – which intends to build a sugar-processing plant in the Russian Far East. The suggested capacity of the new plant, which will use raw material sugar cane delivered from Thailand, is 1,500 tons of processed sugar a day. It is estimated that the investment will amount to $200 million.

At the same time, Moscow has something to offer its Thai partners. In 2014, we had a record grain harvest. It is not surprising that the management of CP Foods increased its import of Russian wheat to feed the needs of their businesses in Thailand and other Asian countries.

Today, Russia and Thailand are aiming to achieve a breakthrough in bilateral cooperation, and agriculture is just one of the sectors where such cooperation is indeed beneficial. This was a particular focus of discussion between the Russian Federation’s Minister for Industry and Trade and his Thai companions during the minister’s official visit to Thailand on Jan. 9. At the meeting, Thai Prime Minister Prayut Chan-o-cha confirmed that Thailand was interested in the full expansion of trade, investment and economic ties with Russia.

And the potential for joint work is huge. Even a hurried view of Russia and Thailand’s potential and the complementary nature of their economies enable one to unambiguously say that the current level and structure of bilateral trade is far from ideal, although, as a whole trade between the two countries has developed quite successfully over the past few years.

Several figures illustrate the current situation in mutual trade. According to the Russian Federal Customs Service, from January to November 2014, trade was valued at $3.98 billion. Thailand has its own accounting methods for country of origin and according to their records trade volumes comprised $4.91 billion.

But despite the accounting methods, the trend is clear – Russia and Thailand are becoming more and more attractive to each other as trading partners. Therefore, the task of bringing trade up to the $10-billion mark should by no means be considered impossible. Based on what? Only taking into account agricultural exports from Thailand?

Let us take a look. The past year was marked by a significant increase in deliveries from Russia to Thailand of crude oil, processed oil products and chemicals.

Even more promising are the joint projects that are currently under development. We are talking about areas such as energy, transportation, the construction of infrastructure, and information and communication technologies.

For example, Russian Railways, the Uralvagonzavod Scientific and Production Corporation, and KAMAZ are interested in the opportunity of participating in large infrastructure projects in Thailand in various forms – from contracts for the construction of ways  to the supply of freight rolling stock, track laying and road-building technology.

Meanwhile, the Sukhoi company is ready to sell its medium-haul aircraft Sukhoi Superjet 100 to Thailand for the needs of local aviation companies.

Here it is important to make an observation. The future of our collaboration with Thailand is not only mutual shipments, but also the organization of joint manufacturing, the transfer of technology in the form of advanced technological devices, their commercialization and their placement on the market in other countries.

This work has already begun. Based on the initiative of the Russian Embassy in Thailand, a working group has been formed with the international manufacturing company, Amata Corporation, with the aim of discussing possible forms of scientific and technological cooperation. Contacts are being made between the Skolkovo Foundation and Thailand Science Park.

All these issues were discussed during a recent meeting of the Joint Russian-Thai Commission on Bilateral Cooperation. The Thai side was headed by Deputy Prime Minister and Minister of Foreign Affairs, General Tanasak Patimapragorn.

The next phase for cooperation between the governments of the two countries will occur in Russia during summer at the sixth meeting of the Joint Commission. But before that, the parties have agreed to make mutual visits with large business missions, exchange commercial offers, prepare and sign mutually beneficial contracts, and to negotiate between the relevant agencies of Russia and Thailand to expand the regulatory framework of trade, economic and investment cooperation.

Kirill Barsky is Ambassador Extraordinary and Plenipotentiary of the  Russian Federation to the Kingdom of Thailand.

Yury Trutnev: We must enter dynamic Asian markets, it’s the only way to win>>>