Moscow and Beijing must learn to be upfront with each other 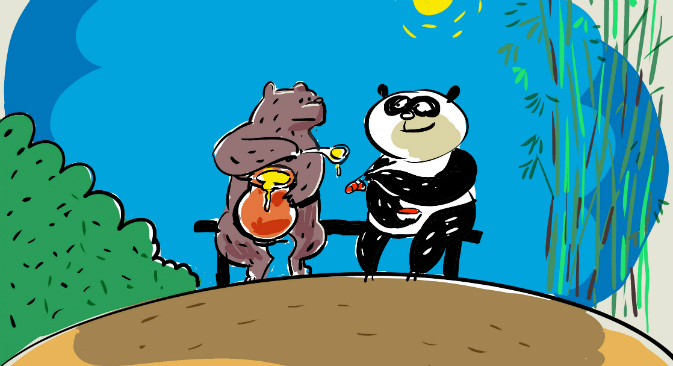 The Kremlin’s much-publicized ‘pivot to the east’ has seen Moscow pour renewed energy into building relations with China, with landmark agreements on gas and arms supplies accompanying Russia’s decision to join the China-led Asian Infrastructure Investment Bank. However, in order for the partnership to flower into a full-fledged alliance the two sides must be honest with each other on their strategic differences and conflicting interests.

The visit of Chinese Foreign Minister Wang Yi to Russia on April 6-8 was widely covered in the media and caused a new wave of enthusiasm about the future of Russian-Chinese relations. However, Wang's trip was rather technical in nature, being made in preparation for the visit of Chinese leader Xi Jinping to Moscow to take part in ceremonies marking the 70th anniversary of the allied victory in World War II.

Much less attention was paid to the trip to Russia in mid-March of the head of the Office of the CPC Central Committee, Li Zhanshu, one of the Chinese president's closest confidants. From the point of view of the practice of Chinese foreign policy, this was an unprecedented visit – diplomatic missions have never yet been given to high-ranking aides of the Chinese head of state.

Partnership has not yet become an alliance

These visits confirm the strengthening of a "comprehensive strategic partnership" between the two countries. But it is premature to speak about the formation of a Russian-Chinese alliance.

The "struggle for a multipolar world" and opposition to U.S. pressure have different geographical dimensions for Moscow and Beijing; Russia is only marginally represented in the Asia-Pacific region, and the issue of the return of the U.S. to Asia is not so acute for Russia as it is for China. Beijing, in turn, is far less interested in resolving the Ukrainian crisis than Russia is.

Moscow and Beijing are also quite restrained about supporting each other in regional conflicts: Premier Li Keqiang's statement that China respects the territorial integrity of Ukraine and call to solve the problem of Crimea through dialogue is almost a mirror image of the words of Russian Security Council Secretary Nikolai Patrushev, who has said that Russia does not support any party in the Sino-Japanese territorial dispute over the Senkaku Islands.

In Central Asia, Beijing's policy creates new challenges for the project of the Eurasian Economic Union in the sense that the release of large, privileged loans to Central Asian countries by China with no political strings attached will create an alternative to Russian financial resources and increase their degree of freedom of maneuver – and the price of political bargaining for Moscow. Russia and China also have different visions on the further development of the Shanghai Cooperation Organization (SCO) – as a political platform (Russia) or as a multilateral development tool (China).

Finally, the consolidation of trade imbalance in economic relations between Russia and China is not conducive to the objectives of diversification of the Russian economy – and will inevitably become the subject of bilateral discussions. The level of investment cooperation is also not high enough.

Ultimately, Beijing and Moscow are in different positions even in their relations with Washington – Russian-American relations have reached a low ebb and there is no visible trend toward improvement. China, meanwhile, values its partnership with the U.S. and is seeking to avoid interference in China-U.S. and China-Russian dialogue.

All of the above, paradoxically, does not mean that the Russian-Chinese strategic partnership has exhausted itself. The introduction of sanctions against Russia by Western countries was the catalyst for Moscow's "pivot to the east" – which for Russia is symbolized, in the first place, by China.

The dynamics of this switch in focus are impressive – after more than a decade of negotiations, China and Russia have reached an agreement on the terms of Russian gas supplies; volumes of the latest models of weapons supplied to China have increased; the parties have established joint financial institutions to stimulate investment cooperation, and continue to increase economic cooperation. Russia's decision to join the Asian Infrastructure Investment Bank (AIIB) set up by China also shows that the decision to "pivot to the east" was taken by no means only under the influence of the immediate political situation.

All the current problems of Russian-Chinese relations and risks they engender appear to be related to the fact that the parties have chosen to focus "on the positive side" and avoid discussion of issues that do not quite suit them for the time being.

A new round of cooperation makes it possible to restart the Russian-Chinese dialogue from the positions of two equal great powers, whose interests are largely, but not always, the same, to discuss the questions that emerge regarding with each other, and to understand the potential for interaction as well as the restrictions that objectively exist.

Mikhail Mamonov is Development Director of the analytical agency Vneshnyaya Politika (Foreign Policy), and has a PhD in Political Science.