After Ukraine, the West should open its doors to Russia 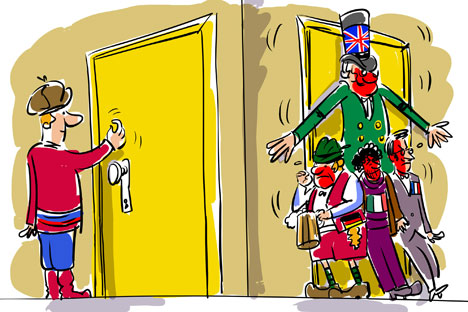 With last month marking the first anniversary of the Russian annexation of Crimea, it seems a fitting time to assess the situation, says former UK ambassador to Russia Sir Tony Brenton

Click here to enlarge the image. Drawing by Alexei Iorsch

Despite odd renewed outbursts of fighting, the acute phase of the Ukraine crisis may be ending. Violence is significantly down and there have been prisoner exchanges and some withdrawal of heavy weapons. On two of the major points of contention, Ukraine will clearly not be admitted to NATO for the foreseeable future, and Kiev has begun working on autonomy arrangements for the rebel regions. Moscow and Kiev, knowing their economic fragility, also know the costs of resumed hostilities could far exceed any likely benefits.

We are not out of the woods yet. Neither side has its zealots completely under control. Each regularly accuses the other of infractions. There are outside forces, notably in Washington, who are looking for a pretext to “put the Russians in their place” (Berlin and Paris have questioned U.S. estimates of the “threatening” build-up of Russian forces in Ukraine). And the Minsk agreement is unlikely to be implemented in full. It stipulates that the Russian border, through which support to the rebels flows, will be closed only when the rebels reach agreement with Kiev on autonomy. This will not happen quickly. The rebels are not part of the autonomy discussions. So for the immediate future, the Donbass is likely to remain an unresolved conflict, like those in Georgia, with every possibility (as in Georgia) of a renewed explosion later.

But with peace perhaps in prospect, what do we do about Russia? The first action point is western sanctions. These were always a misbegotten policy, pursued more in the absence of a feasible alternative than to achieve results. Their central effect has been to unite Russian behind their president and his policies – the reverse of what was intended. President Obama still argues that they will “change Putin’s calculus”. But no Russian I know (including leading members of the opposition) believes this will happen. For Putin the crisis is about national security, not money. Nor does any Russian believe there is the slightest prospect of bringing Putin down.

Recent hints of squabbles within the Russian ruling apparatus have been a sharp reminder of how irreplaceable Putin is as the equilibrator of the system. Unless hostilities resume, sanctions are not sustainable. The European consensus on which they depend is visibly eroding. The West needs to find an elegant way to back out of the sanctions cul-de-sac, in parallel with Russian delivery on the peace process.

Second, while the much-touted narrative of a “revanchist Russia” with designs on Ukraine, Estonia, Poland, etc, has virtually no evidence to support it, the Ukraine crisis does raise serious questions about European security. The annexation of Crimea was exceptional and is plainly irreversible; the vast majority of Crimeans now see Crimea as an inalienable part of Russia. But Crimea is also a sharp reminder that the world is still ultimately governed by power, not law. Nato needs to arm itself for such a world. The decisions of last summer to create a “Spearhead Force” for Nato’s most exposed members was right, but was undermined by the unwillingness of NATO’s major European members to spend more on defence.

Finally there is the question of how we relate to Russia. The predominant western view is that we are now in a “new Cold War” requiring an extended period of isolation and containment. This would be a blunder, for three reasons. First, pragmatism. Trust between Russia and the West is at an absolute low. Meanwhile, the Russians are engaged in demonstrative military activity to discourage what they see as a western threat. It is extraordinarily dangerous that at this tense time we have fewer military and other links with the Russians than we had at the height of the Cold War. There is every possibility of chance confrontation or catastrophic accident. Links need urgently to be rebuilt to diminish that possibility.

Second, there is the geopolitics. China has managed its relationship with Russia much better than the West. Xi Jinping is a regular visitor to Moscow and, unlike western leaders, will be in Moscow for this year’s anniversary of the end of the Second World War in Europe. Despite long-standing historical tensions between them, China and Russia both now have strong reasons to strengthen their links, and are doing so. Last summer’s $400bn gas contract and the forthcoming joint military exercise in the Mediterranean are the most eye-catching examples. Meanwhile, U.S.-China geopolitical competition intensifies – as underlined by the recent argument over the Asia Infrastructure Investment Bank. Russia is by culture and inclination a European country. Does it really make sense for the West to push it into China’s arms?

And third, there is the trajectory of Russia. Until a year ago the Russian middle class was the fastest growing in Europe. That class is hungry for European standards of prosperity, governance and rights – as became clear in the demonstrations of 2011/12. The regime is determined to maintain political control but has been keen to foster the economic openness on which Russian development depends. In a wide range of other countries, from South Korea to Indonesia, the same politico/economic confrontation has produced the triumph of democracy and open markets. Russia was on the same route. The Ukraine crisis stopped that. We need to get back to the business of helping Russia become a normal European state. The way to reform Russia is to open doors, not close them.

Sir Tony Brenton is a writer and former diplomat. He was UK ambassador to Russia 2004-08