The facade of Russian army reforms 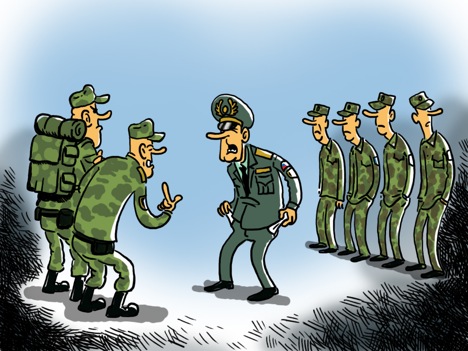 Russia’s Minister of Defence Sergei Shoigu said in April that he hoped, “in the long run, our army will become completely professional”. This statement differs from his earlier one when, referring to the geographic size of the country, he had said in November 2013 that it would be impossible to achieve a complete transition to a contract-based army. So when was Shoigu being candid? Both times, it seems, going by the history of the army.

Military service in Russia had historically been to enhance the career of the elites, while ‘service’ for peasants, who were forcibly recruited into the army for most of their entire lives, and recruits "taken to be soldiers,” meant that their families could not hope to see them again.

In the Soviet era, the army became the workers’ and peasants’ army, and carried a certain prestige. Compulsory service was for just 2-3 years, and was seen as a necessary school to turn out real men. Service, where it was possible to receive a certain professional training, was for many, a ticket to enhancement of their condition in life. But people of the major cities, which had many more opportunities, began to tire of this “honourable duty” long before the collapse of the USSR.

In the 1990s, the new authorities raised the issue of conscription and recruitment to the army, promising the public that it would become contract based as in the United States. Neither the military nor the economists liked this idea, which was described as “madness,” given the economic situation of the time, but it was necessary to promise everyone a better life.

There was need for such promises then because of the chaos that overtook the Russian army when the Soviet Union collapsed. Those who remember pictures from the first and second Chechen wars can easily evaluate the conditions provided to 18 year old youths who were sent out to be slaughtered in numerous hot spots around the former USSR.

The officer corps lost their best officers who, for lack of money, were forced to change careers and hazing began to flourish in the barracks. Strictly speaking, such a phenomenon is normal for a military organization.  For example, Peruvian writer Mario Vargas Llosa describes the phenomenon vividly in his novel, ‘The Time of the Hero’, but in Russia, it reached terrible proportions. Senior soldiers beat others to death, subjected them to torture and mistreatment, officers used juniors as slaves for the construction of personal summer houses and even “put them up for rent.”

The institution of contract-based service began to first be applied during the second campaign in Chechnya. Unnecessary casualties among conscripts served no purpose to President (Boris) Yeltsin’s successor Vladimir Putin, before elections. Consequently, contracted soldiers appeared in the army. The need to pay them and other military expenses immediately and clearly demonstrated that the country did not have the financial capabilities to do so.

Appointed in 2001 as defence minister, Sergei Ivanov announced that the army would be structured on a mixed principle, and combat ready units would be transferred to contractual professional soldiers by 2007. This was not fully implemented.

The government could only provide 8000 rubles for contract salaries, which was extremely low, even for economically depressed areas of the country. Officers had to meet quotas and they began forcing soldiers to sign on as contractors. This form of ‘Potemkin village’ disappeared after three years, when the contracts ended and soldiers rejoiced and began to run off home.

Following the war with Georgia in 2008, huge organizational and technical problems were revealed and reforms initiated for the armed forces. These were largely associated with the then Minister of Defence, Anatoly Serdukov.

Realising that it was not possible to build a professional army based on contractual soldiers only, the government decided to reduce the numbers of contracted soldiers and increase the basic allowances for officers and professional soldiers, while carrying out active publicity for conscription. The reforms included reducing conscription to a single year. Even then, officers grumbled that in such a short amount of time it was impossible to turn school children into military specialists, capable of using complicated technical equipment, but they had no choice.

Minister Shoigu’s statement has to be understood in the light of this background. He received the baton to reform the army from Serdyukov, who is now facing criticism. So Shoigu, in 2013, made a completely logical announcement, based on the fact that a million people are not sufficient to defend Russia, given its huge geographic size. However, to maintain such a large army was not affordable, hence conscription would allow the preparation of a reserve army in case of a serious war, and enlistment by contract would continue for regional wars.

But problems arose on both fronts. In the absence of any ideology, and with the transition of society to one primarily motivated by financial stimulus with constant propaganda for the cult of consumerism, youth do not understand when you talk to them of “duty” and “defence of the fatherland.” Nor do they understand what they are protecting or whom they are defending the fatherland from, and why their peers, who were fortunate enough to be born to wealthier government bureaucrats or businessmen, can buy their way directly or indirectly out of service.

For the same reason, there are no lines of people waiting to be signed up under contract. The average salary around the country is 32,000 rubles per month. A contract soldier receives 30,000-40,000 rubles, and for this he has to live in barracks, follow orders and risk his life.

It is clear Shoigu spoke about a professional army as a final, long term goal at the signing ceremony for the 300,000th contract soldier. Additionally, by stating that the army is now 50% contract based, he acknowledged that even by agreeing to reduce the army to one million, it is short of 400,000 soldiers. It appears that a professional contract army is impossible in Russia but nonetheless, the military is transitioning towards it.