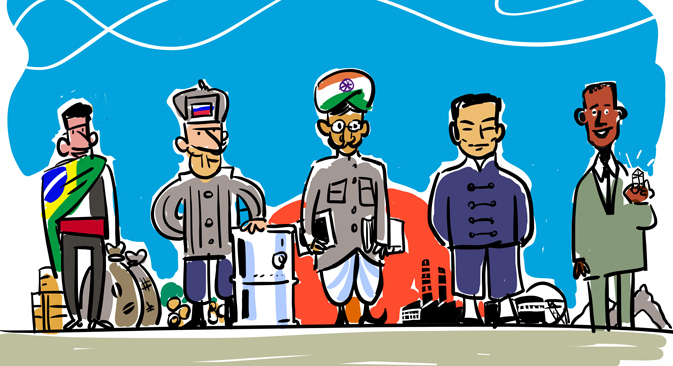 The group of emerging nations has the opportunity to form a powerful economic bloc, which with time will grow in stature.

Ever since BRICS was established, few experts have expected its members to form an informal economic union. Despite the fact that BRICS was created for informal discussions of global developmental issues, the new association is following more of a policy of economic integration and political interaction.

The union of the world's five largest developing economies has good potential for growth. These countries contain the most valuable resources for the global economy. Brazil is rich in agricultural production, Russia and South Africa in their natural and mineral resources, India has inexpensive intellectual resources and China has a powerful production base.

The BRICS countries have the opportunity of forming a powerful economic bloc, which with time will be very difficult to oppose. The collective indicators of the five countries are even more impressive. According to the World Bank, BRICS's total GDP in 2014 was around $16.5 trillion, or 18 percent of the world’s GDP. The combined currency reserves of the grouping stand at about $4 trillion, 75 percent of world’s currency reserves. The total population of the five countries is more than 3 billion. Other developing markets are also showing an increased interest in the BRICS countries. Argentina, Mexico and Indonesia could become members in the future.

It is important to note that in general the BRICS countries are maintaining their leading positions as the most dynamically developing markets in the world. Investors and creditors are particularly interested in China, Brazil and India. Russia, although being an important player in world markets, has seen a decrease in interest, if compared to those three countries. This is largely because of the economic sanctions, the weakening of its investment rating and the devaluation of the ruble.

One of the most significant agreements reached by leaders of the BRICS countries during the last summit was to create a joint pool of national currency reserves in the event of a possible deterioration of the financial crisis. In particular, it was agreed to establish a new development bank with a charter capital of $100 billion. The new bank's funds will be used to finance and support developing economies. The agreement on the pool of conditional currencies will have similar functions to those of the International Monetary Fund. The bank will give financial assistance to those BRICS countries that have difficulties in their payment balances.

Another agreement that was signed concerns the expansion of mutual trade with payments in national currencies, which in the future may destroy the dollar's monopoly on the BRICS countries' mutual payments.

Russia will feel the most perceptible advantage of the creation of the national currency reserves pool. This necessity is conditioned by global political tensions and the effect of the anti-Russian economic sanctions, which cuts off Russian enterprises from inexpensive western credit.

In the last ten years Russia's commodity turnover with its BRICS partners increased by almost nine times: from $14.2 billion to $121.4 billion. The macroeconomic effect for Russia from such a policy should be the reduction of prices on goods produced on the association's territory or the expansion of competition in the common BRICS market.

The prospects of the development and modernization of Russia's economy and the reduction of its dependence on the volatility of world financial markets will depend on the effectiveness of the interactivity of the BRICS countries in key issues. But closer economic interaction within such a large association, as it happens, for example, in advanced integrated associations (such as the EU and Eurasian Economic Union) is not needed.

The future of the BRICS should be tied to the minimization of losses for national economies in the conditions of globalization with an orientation to a more balanced distribution of resources and a positive effect on the global economy. Especially since the trends in the development of BRICS' financial institutions indicate its potential to change the existing international currency-financial systems.

The union of the five largest developing economies of the world should help its members deal better with the financial crisis and prevent a further stagnation of the economy. The revival of trade between the BRICS member countries should be of help and in turn lead to the growth of supply and stimulation of the real sector in these countries' economies. In this case, BRICS has all the grounds and possibilities to become a comprehensive strategic and tactical mechanism to deal with issues of global politics and economics.

Alisen Alisenov is Professor of Economy and Finance at the RANEPA Faculty of Economic and Social Sciences.