Is Ukraine turning into Russia’s Pakistan? 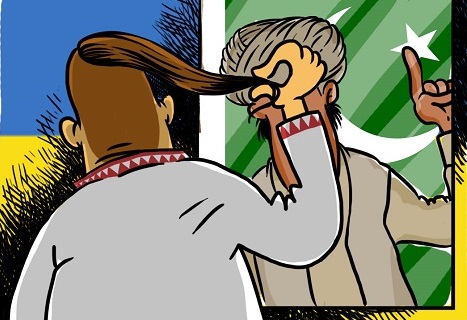 Looking at Pakistan today, it is as if we are peeking into one of the possible outcomes for the future of Ukraine some forty years from now.

A recently released book about the partition of India in 1947 by the British is food for thought for those observing Russia-Ukraine relations.That is to say, looking at Pakistan today, it is as if we are peeking into one of the possible outcomes for the future of Ukraine some forty years from now.

The book, titled Midnight's Furies: The Deadly Legacy of India's Partition, is mostly about the events of 1947, which, thankfully have nothing in common with the way Russia and Ukraine split. Reading the description of the horrible massacres, you come to comprehend how well things turned out between the Moscow and Kiev in 1991. It was like a dream. Millions of people neither noticed nor cared that they are living in separate states.

As for India… There is the classic film Gandhi by Richard Attenborough, where the camera shows a long road. On one side, tens of thousands of Muslims are plodding towards Pakistan, and on the other side tens of thousands of Hindus are walking out of Pakistan to independent India. Someone throws a stone at someone, and the whole road turns into carnage for dozens of miles, wall to wall.

Suffice it to say that 1-2 million people were killed in such massacres. The savagery that both sides committed (described in detail in the book) astonished even the British, who had just been in continental Europe two years prior and there opened the gates of Hitler’s concentration camps.

All despite the fact that for many generations prior to this, the Muslims and Hindus, as well as many other Indian communities, lived in peace and harmony (in general, of course). India was for centuries (that is, well before the British) a kind of model multi-religious empire.

For example, the Moghul Dynasty, overthrown by the English, was Muslim, but historians say it refrained from violently converting millions of people to its religion. As a result, Kashmir, for instance, was famous for having a village where seven different religions were represented and its families visited each other on holidays. And that did not happen just in Kashmir.

In general, the story of India’s partition leads to dismal reflections on human nature, and particularly on the obvious comparison with the current civil war in Ukraine, above all, with the events in Donbass. Well, of course West and East Ukraine are populated by people with different lifestyles, and so there was always someone there who did not like or laughed at someone else, but to attain such savagery as we observed last year?

In a review of Midnight’s Furies published by Asian Book Review, the author is scolded for inadequately analyzing the question of who partitioned the once unified state and why. It is well known that Winston Churchill, no longer the Prime Minister of Great Britain, promised full support to the future leader of Pakistan, Muhammad Ali Jinnah. It is also known that India used to be, especially in the 1950s, extremely “leftist” and pro-Soviet. Therefore all of the hopes of the West rested on Pakistan serving as a perpetual check on India’s strength.

No need to draw a parallel with Ukraine again, right?

Well, there is a special story there too. The Pakistani military, traditionally playing an important role in the country, is credited with dabbling in all kinds of religious extremism. The result has been the Taliban’s rise to power in Afghanistan (originating in Pakistani territory), terrorism against India, and many other such global-scale unpleasantries including the war, which the US had to start with the Taliban in 2001 after the mega terrorist attack in New York. At that time, Pakistan was forced to join the war under threat of being "bombed back into the Stone Age.”

But let us have a look at what has come of all this today. Yes, India has warred with Pakistan several times, and they are not very friendly to this day. Yes, India, upon discovering that Pakistan was preparing nuclear tests (in 1998), conducted her own tests, and now both countries are nuclear. (Ukraine is not, thankfully.) But India has become a great power, a global leader with a rapidly developing economy while Pakistan is continually referred to as a “failed state.” It just moves from crisis to default and back to crisis.

How to build a nation

Any Indian will remind you what American journalist Phillips Talbot wrote back in the 1940s. “Hatred of India is the cement that holds Pakistan together.” National identity should never be built solely on something negative. That is, it is insufficient to say that you are “not India.” You need to show who you are. Not every state can manage this.

Of course, this is not the affair of millions of regular people, but of a key segment of the Pakistani elite in 1947. These people needed to somehow demonstrate their national uniqueness, repeatedly explaining to everyone, including their own people, why Pakistan should be separate and what is special about it. And the more history showed that nothing good was coming from a separate existence, the more the sense of constant vulnerability before India and its successes grew within this segment of the Pakistani elite, and the more they felt the need to prove their superiority.

So, what does history have to show about this? Please recall that the core concept behind the creation of Pakistan was simply that after the English depart, the Muslims should have their own state. However, this originally consisted of the non-contiguous parts of East and West Pakistan. As a result, these two sides entered into war with each other in 1971. East Pakistan became an independent state – Bangladesh. This historical event was accompanied by the deaths of millions of people, including through mass starvation.

Do we need to draw parallels with Ukraine and its East and West yet again?

Meanwhile, as any Indian will tell you, the idea of a separate state for Muslims is confronted with the demographic fact that there are now more Muslims in India than Pakistan. Why then was it necessary to split the state up at that time, especially at such a human cost?

The question arises of what lies ahead (for Pakistan and Ukraine). Nothing. Concerning Pakistan, it exists all the same.  It’s already in its seventh decade and does not even consider joining India somehow, not even when there is a growing disparity between their standards of living. It is a very sad story, and hardly unique.