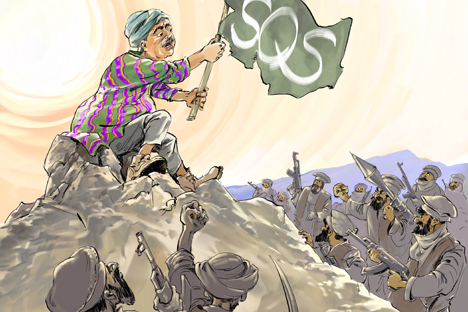 Kabul’s request to Moscow for support in its fight against Taliban insurgents raises the intriguing prospect that the balance of power in the region, where NATO and the U.S. have been dominant for the last 15 years, may be changing. Regardless of Afghanistan’s real intentions, the move shows Russia’s growing diplomatic presence.

The news that the Afghan government has asked Russia for help in fighting the armed opposition in the Central Asian country has raised the issue of a change in the region's power balance. Until now the country has been considered to be in the U.S. and NATO sphere of influence since Kabul is completely dependent on its Western allies' military and financial assistance, which helps it continue the fight against the Taliban and other terrorist groups in the region.

However, recent events have shown that the Afghan army and NATO's resources are insufficient to maintain the complex, albeit stable, situation in northern Afghanistan. In the spring of 2015 the Taliban drastically strengthened its positions in the provinces of Badakhshan and Kunduz, which border with Tajikistan, and this fall the fighters conducted a demonstrative military operation that led them to occupy the town of Kunduz for several days. In the end government and American forces were able to drive the militants out of the town using artillery and aviation. Yet even this temporary success for the Taliban has shown that in 14 years foreign forces in Afghanistan have not been able to defeat the armed opposition to central government.

Cause for concern in Russia

The appearance of large terrorist forces composed of at least several thousand men close to the former Soviet borders could not but alarm Moscow and its CIS and CSTO (Collective Security Treaty Organization) allies. Currently, these two organizations are creating a collective security force to counter militants in the event they penetrate the borders. The recent example in Syria has shown that Moscow is ready to support the fight against terrorism far from its borders and in the past Russia supplied arms to NATO forces when they were fighting the Taliban in the 1990s. And now once again Kabul has turned to Moscow for support.

Obviously, this does not mean that Russia will send in its forces. The Afghan army is just asking for helicopters and firearms, which were produced right up to the introduction of the sanctions against Russia, although with Western resources. But now trade has recommenced. At the beginning of October Russian representatives talked about large supplies of firearms, as well as negotiations on the supply of MI-35 attack helicopters. However, the latest statements, with an open request for help, made during Afghan Vice President Abdul Rashid Dostum's unofficial visit to Russia, clearly go beyond purely commercial ties.

What is Kabul’s agenda?

There are several reasons why Kabul wishes to strengthen its relations with Russia. Firstly, this has to do with the objective demand for Russian arms that is currently growing throughout the world. AK-47 machineguns do not require the thorough maintenance that their American equivalents do, while the Russian MI-line helicopters are often better suited for combat in mountainous regions than the helicopters that NATO has at its disposal. In fact, this is what forced the U.S. to buy Russian arms for the Afghan army before the "sanctions war."

Secondly, what is going on may just be a "diplomatic game." Lately, the U.S. and the European countries have been less willing to help Afghanistan, while the country's state budget cannot be fulfilled without foreign grants and credit, without which Afghanistan would not be able to finance many infrastructure projects and support the size of its army and police (more than 300,000 people). That is why by turning to Russia, Kabul may only be provoking Washington with the hope that it will increase its financial support.

Why Moscow is in no hurry to mediate Israeli-Palestinian conflict

However, Afghanistan's elite has been objectively manifesting pro-Russian sentiments. Vice President Dostum has already asked Russia – through the press – for help in fighting the Taliban in the country's north. Former Afghan President Hamid Karzai tried to improve relations with Moscow in the last year of his tenure, in particular, by approving Crimea's return to Russia, despite criticism from his Western partners.

Finally, there also exists the likelihood that behind Kabul's attempts to get closer to Moscow lie not military or economic considerations, but rather political calculations. Unlike the U.S., which had counted on destroying the opposition forces and negotiating with separate militant leaders, Russia and China tried to weaken the extremists by breaking down their alliance with Pakistani intelligence, since Pakistan uses the Taliban in its fight with India over influence in Afghanistan. Washington tried making an agreement with Islamabad but failed. Then India and Pakistan were admitted into the Shanghai Cooperation Organization, which led to Afghan-Pakistani talks. Meanwhile, there is information coming from Pakistan's northern regions that the government has finally started driving the terrorist groups back into Afghanistan, depriving them of a tranquil home front.

The role of each of the previous motives will determine how serious and long-term the anti-terrorism alliance between Kabul and Moscow will be. But the attempts to create the alliance themselves show Russia's increasing significance in the Middle East and the growth of its direct and indirect influence on the countries in the region.

The author is a political analyst and expert from the Russian Council on International Affairs and a specialist on Afghanistan and Central Asian countries.