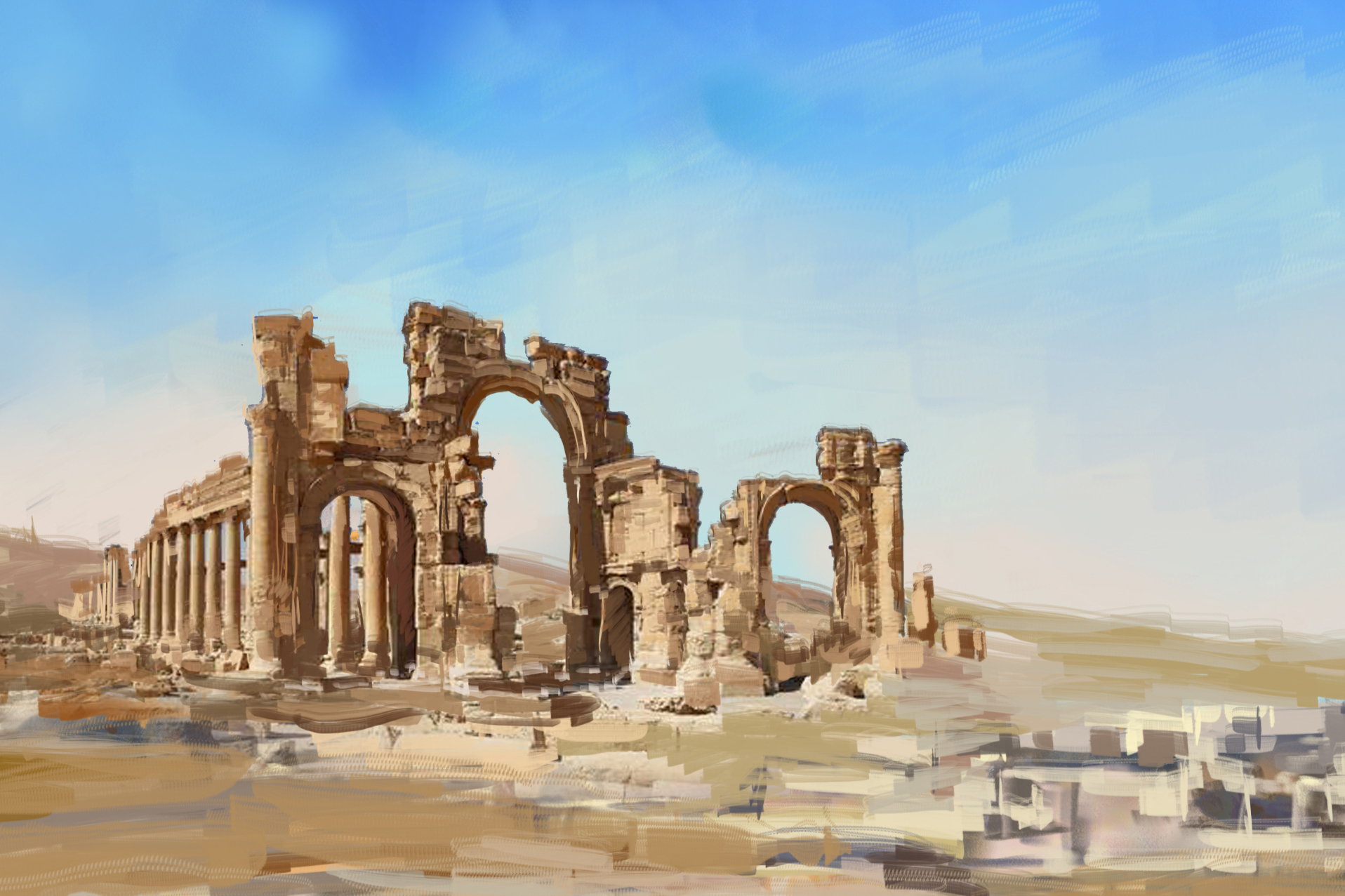 St Petersburg, the city where I was born and live, has a special and poetic nickname: since the reign of Catherine the Great in the second half of the 18th century, it has been referred to as the “Northern Palmyra”.

Indeed, the story of Zenobia, the powerful, determined and enlightened queen of the Parlmyrene Empire, was compared to Catherine’s own magnificent reign, and ancient Palmyra, which prided itself on its immense wealth and numerous architectural monuments, thus became a venerable sister of Russia’s imperial capital.

Writer, explorer and princess, Lydia Pashkova, was one of the first people to describe Palmyra in her works. In 1882, Prince Semyon Abambek-Lazarev, another Russian traveler and Orientalist who took part in the excavations in Palmyra, discovered a marble slab dating back to 137 AD, inscribed with texts recording customs tariffs in two languages: Greek and Aramaic. The slab later played a major role in deciphering Aramaic and is currently part of the collection of St Petersburg's State Hermitage museum.

Syrian crisis: Vienna-2 has brought UN, Iran and hope on board

In 1884, Abambek-Lazarev published his exquisitely executed book Palmyra on the results of the excavations, and a century later St Petersburg-based researcher and my senior colleague, Ilya Schifman released a study of the slab - also known as a stele - that included a translation of the inscription in Russian. Famous Russian art historian and archaeologist Boris Farmakovsky also made significant contributions to the exploration of Palmyra.

In 2001, I had the privilege to participate in organizing a major exhibition Moi, Zénobie, reine de Palmyre (I, Zenobia, queen of Palmyra), held in Paris. At a reception to mark its opening, I had a very interesting conversation with an elderly Syrian man, who impressed me with his extensive knowledge. It was not until later that I realized that he was none other than Doctor Khaled al-Asaad, director of the Palmyra museum complex. In August 2015, the eminent 81 year-old archaeologist was beheaded by members of Islamic extremist movement ISIS.

Now the terrorists have blown up Palmyra’s Arch of Triumph, its majestic temple of Bel (founded in 32 AD), the eclectic Greco-Roman-cum-Middle-Eastern style Temple of Baalshamin (131 AD) and three of the tower tombs in the Palmyrene Valley of Tombs, dating from 44 to 103 AD. They have also destroyed the ancient catholic monastery of Mar Elian, located between Palmyra and the town of Qaryatain, killing all the monks living there. The site of Dura Europos, an old border city built in 300 BC and inhabited until the 3rd century AD, was destroyed, as was Alamea, dating to the beginning of the 3rd century BC. The Citadel of Aleppo and the giant amphitheater of Bosra were completely demolished and Krak des Chevaliers, a stunning crusader castle, significantly damaged.

By blowing up ancient monuments, ISIS is actually destroying the physical testimony to the very religious history that forms the basis for the Quran. There is, however, plenty of evidence suggesting that the destruction is nothing but a horrific smokescreen that obscures a multi-million dollar international trade in contraband antiques and artefacts.

One of St Petersburg's libraries holds an ancient manuscript written by Usamah ibn Munqidh (1095–1188), the great Arabian writer, knight and hunter. He was born in Shaizar, a small Syrian principality, and was a nephew of the local emir. Following his father’s death, a family conflict forced him to leave his home forever. The wandering emir and poet fought European crusaders, but also befriended and feasted with some of them.

In August 1157, a terrible earthquake struck Northern Syria, destroying the castle of Usamah’s family, killing most of his relatives. When he learned of it, he returned to the land of his birth. Standing over the ruins of the castle in complete shock, Usamah decided to collect Arabic poems describing abandoned homes in a single book.

It is the manuscript of this book, rewritten several times in the author’s lifetime that is in the library's collection. In it, Usamah unwittingly wrote down a passage that could be on the lips of any Syrian sensitive to their history and culture today: “… I’ve been compelled to compile this book by the destruction that has befallen my native land and me. Indeed, time itself cast its shadow on it and dashed out to crush it with all its might and force… All the settlements were obliterated and all their inhabitants killed; houses became mere remnants, and joys turned into sorrows and grief. I arrived there after the earthquake struck it down… and I recognized neither my own abode, nor the dwelling of my parents and my brothers, nor the home of my uncles, of my uncle’s sons, of my kin. Dismayed, I called upon God, asking him about the great trial He sent, about taking away the blessings He had earlier granted. Then, I walked away, trembling and swaying as if bowing down under a burden. The loss was so great that the swift-running tears dried out, and sighs followed one after another, straightening the curves of my ribs...”

For many years, I wanted to visit Shaizar to see the ruins of the ancient castle and make a film about the manuscript and the fate of its author. I failed to make it in time. Looking at the map of Syria now, we don’t notice the great monuments the country has always been famous for, but rather the locations of battles and bombings and the territories controlled by government forces and various kinds of jihadists. I wanted to look up and find out who was in control of Shaizar at the moment, but I was too scared to do it. What more can I say?

Prof. Efim Rezvan is an expert in Arab studies and scholar of Islam. He is also Deputy Director of Peter the Great Museum of Anthropolgy and Ethnography (Kunstkamera) and editor-in-chief of Manuscripta Orientalia, the International Journal for Oriental Manuscript Research.