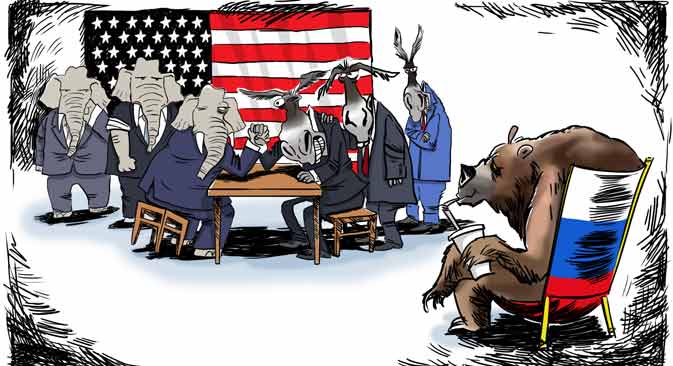 Although the U.S. presidential election is still more than a year away, the candidates have said enough about Russia to give some insights into where U.S.-Russia relations are likely to go.

If Russia’s leaders could vote, they’d probably back Trump for the Republicans and anybody but Clinton on the Democratic ticket.

If the Kremlin elite could cast a ballot in a U.S. presidential election, it would probably relish the chance to vote for  Donald Trump. In the real world, however, things are far more complicated. What does the current election season mean for future relations between Washington and Moscow?

Casual observers could be forgiven for imagining that the United States has a semipermanent election cycle. With still more than 13 months to go before Barack Obama relinquishes the White House, it already feels like the campaign has dragged on for an eternity. Russians can only marvel at the showbiz-style U.S. election process.

Bill Clinton remains popular in Russia. Rightly or wrongly, he’s perceived as having been less hostile to the country than his two successors, George W. Bush and Obama. Although his wife, Hillary Rodham Clinton, is now the bookmaker’s odds-on favorite to take the Democratic nomination,  Hillary is not Bill and times have changed. It’s impossible to imagine the former Secretary of State laughing and joking with Vladimir Putin as her husband used to do with Boris Yeltsin. In fact, Mrs. Clinton is regarded as a hardliner on Russia. Indeed, she’s criticized Barack Obama’s handling of the Ukraine crisis and proposed far stronger measures to support Kiev.

Of course, Clinton’s position might well be pre-election bluster, designed to cast her as a strong figure. Hoping to become the first female president, Clinton probably feels that she has to appear even tougher than her male opponents at times. In that regard, she’s borrowing from the playbook of Angela Merkel and Margaret Thatcher, two phenomenally successful female leaders. The Kremlin naturally fears that a new Clinton presidency would be far more hawkish than the previous Clinton administration.

The elephants in the room

Currently, Marco Rubio is the long-term favorite in the race for the  Republican nomination. The 44-year-old Florida senator is potentially even tougher on Russia than John McCain, a notorious tormentor of Putin’s government. In fact, Rubio, who has strong links to the Tea Party movement, has even won support from former McCain donors such as George Seay and Jim Rubright, according to Fox News.

In May, Rubio penned a Politico op-ed in which he called for further NATO expansion, including the accession of Ukraine. The Kremlin would welcome that like it would greet snow in July. Responding to the  idea that NATO might send miltary advisors to Ukraine, Alexander Grushko, Russia’s envoy to the Atlantic Alliance, told news agency Tass that “Moscow will take all measures, including military-technical, to neutralize (the) possible threat from (a) NATO presence in Ukraine.”

Most analysts agree that should full NATO membership for Ukraine be proposed, Moscow’s reaction would be less than pleasant.

NATO expansion may be the one topic of agreement between Rubio and his former mentor Jeb Bush, who may yet make an impact in the race. Bush views Putin as a “bully” and has called for larger troop deployments to the NATO-member Baltic states.

Then there’s Trump himself. Although the billionaire’s candidacy was orignally viewed as a joke, nobody’s laughing now. While odds-makers continue to mark him an outsider, the majority of Republican voters currently consider him the best candidate for the November 2016 election.

Earlier, at a press conference in Scotland, Trump said: “I’d get along very well with Vladimir Putin”.

Of course, some U.S. allies in Europe might be alarmed at a putative President Trump’s warm feelings towards Russia. This doesn’t seem to bother the candidate, who doesn’t have much sympathy for the Europeans. European leaders, Trump said, are “dealing with Russia, they’re taking in the gas, they’re taking in the oil. And you know, we’re making a big deal out of it.”

Trump also believes that Crimea is Europe’s problem and that the U.S. has no role to play in the territorial dispute.

In aggregate polling, only Ben Carson presently threatens Trump. Hailing from economically moribund Detroit, the gifted neurosurgeon is no foreign policy expert. In March, he told conservative radio host Hugh Hewitt that “we need to convince (the Baltics) to get involved in NATO,” seemingly unaware that Estonia, Latvia and Lithuania were already members. Obviously, the Kremlin would prefer that Carson were right.

On the other hand

While the Republican field is incredibly competitive, Clinton’s only realistic rival for the Democratic nomination appears to be Bernie Sanders, the 74-year-old senator from Vermont. A self-styled “democratic socialist,” he has been a consistent critic of U.S. foreign policy, and has described the N.S.A. as being “out of control.” While that might suggest he is more amenable to Russian interests than Clinton, he has strongly supported Obama’s policy of sanctions against Russia.

Of course, current positions are based only on opinion polls. The real voting doesn’t start until February, when both Democrats and Republicans will begin their primary season. This time eight years ago, Hillary Clinton was almost 30 percentage points ahead of Barack Obama, according to Gallup, but we all know that Obama later took the Democratic nomination and eventually the presidency. At the same time, former New York mayor Rudy Giuliani enjoyed an average 12-point lead at the top of Republican polls over  actor Fred Thompson. Ultimately, John McCain was selected.

If Russia’s leaders could vote, they’d probably back Trump for the Republicans and anybody but Clinton on the Democrat ticket. The Kremlin’s worst nightmare would be a Clinton-Rubio battle. In such a contest, Russia would make a convenient whipping boy for their foreign policy tussles. Worryingly for Moscow, Clinton-Rubio remains far more likely than Trump or any Democrat alternative to Clinton. Russia could easily find itself used as the electoral bogeyman du jour. It could be a long year.

Bryan MacDonald is a Moscow-based Irish journalist who focuses on Russia’s role in international geopolitics.