No excuse for disunity after terror attacks 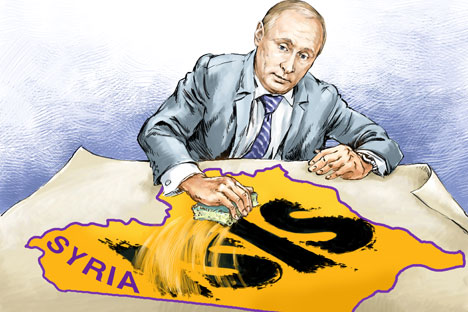 A series of terrorist attacks in France and the bombing of the airplane over Egypt have forced Russia and the West to recognize the undeniable fact that there is a common enemy; international terrorism, represented primarily by ISIS. This enemy has to be crushed in unison, while all other disagreements assume secondary importance.

Once established that a terrorist act was indeed responsible for bringing down the Russian passenger airliner in Egypt, Russian President Vladimir Putin affirmed that "Russia's business in Syria is correct." Revenge for the deaths of the 224 passengers has now become a matter of national principle.

"The murder of our people in Sinai is among the bloodiest crimes in terms of numbers of victims. This will remain with us forever. But it will not prevent us from finding and punishing the criminals," said Putin, citing Article 51 of the UN Charter on a country's right to self-defence. Russia has announced an unprecedented reward of $50 million for information leading to the capture or death of the terrorists responsible for the tragedy.

Although Putin was careful in his use of the words "revenge," "chastise" and "punish" in reference to the terrorists, his press secretary Dmitry Peskov was less discreet, saying that the special services had received an order to "destroy" everyone involved in the terrorist act. Moreover, by citing Article 51 and by using a hard tone, Putin made Russians understand that the terrorists' "punishment" will be similar to the actions of the Israeli special services, which in their time hunted down the Palestinian terrorists who captured and murdered Israeli athletes during the 1972 Olympics in Munich and killed them without any judicial hassles.

What consequences could Moscow's official recognition of the terrorist act have? It is unlikely that this will become a reason to immediately cut air communication with other countries (as was done with Egypt) that pose a significant terrorist threat. Several Russian parliamentarians have already voiced such thoughts. This extreme measure is likely only in case of a more dangerous escalation of terrorism. For now Russia’s federal air transport agency has recommended increase in levels of air security on flights to 47 countries, including some European countries and the United States.

Concerning Syria, the expected and announced increase in the number of strikes on terrorist targets will not lead to a Russian ground operation. A single anti-terrorist front will also not be formed, for now. Yet coordination between Moscow and the West will doubtless intensify after the terrorist acts in Paris and the G20 summit in Turkey, where the subject matter was discussed in a new context. Relations between Russia and the West in light of the new recognized threat are obviously better today than they were a year ago.

Moscow is therefore bound to increase the number of air strikes on ISIS positions but will refrain from striking forces belonging to the Free Syrian Army, which the West considers the "moderate opposition." However, the West has still not given Moscow the list of sites controlled by the so-called "moderate" opposition in order that Russia not bomb them. This, unfortunately, demonstrates the extremely low level of trust between the sides. However, closer coordination between the sides concerning those who certainly should be bombed has already begun. The fact that immediately after Putin's statement the Russian air force launched an attack on what is basically the Islamic State (ISIS) capital, Raqqa, is proof of this.

A final battle with the forces of Rome

With respect to the ground operation, even though experts believe that a full victory over ISIS will be impossible without it and neither the forces of Assad nor the Kurds are enough, the matter is much more complex. And more ominous. Islamic State, which gives significant importance to the early Islamic surahs (verses) in its propaganda and ideology, actually longs for a "decisive and final" ground battle with the "forces of Rome," that is, the West and the Christian world as a whole. The battle, according to such prophecies, must take place near the Syrian town of Dabiq (now controlled by ISIS), which is not far from Raqqa. If this interpretation of ISIS's intentions is true, then the Parisian terrorist act and the downing of the Russian plane are both provocations, "invitations to a battle" from the fanatics.

If the invitation goes unanswered, there will be more "invitations." This confirms that the fanatics and obscurantists have posed a very serious challenge for our civilization. And for now our disagreements on things that are profoundly secondary are preventing us from forming an answer to the challenge.

The author is a political analyst and member of the Council on Foreign and Defense Policy, an independent Moscow-based think tank.

After the Paris attacks