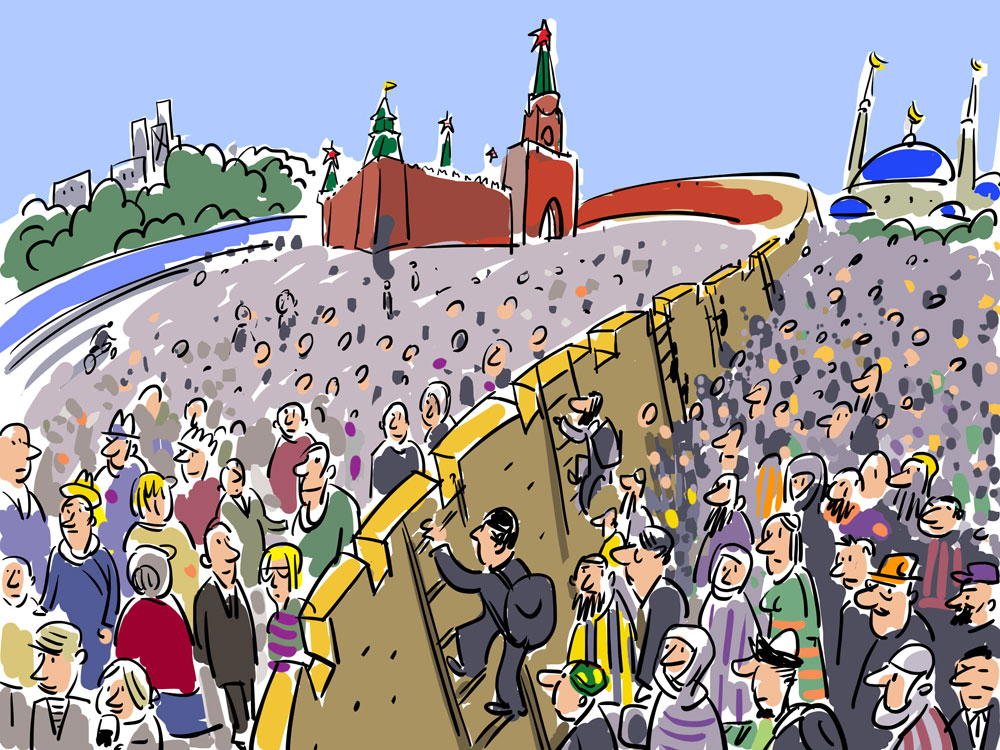 The recent tragedy involving a migrant nanny from Central Asia who killed a four-year-old girl has shaken Russians and prompted Russian society to think seriously about what role Russia should play in the region, where some of the former Soviet republics have failed to cope with independence, making them potentially easy prey for ISIS.

We still do not want to believe in the reality of what happened near the Oktyabrskoye Polye metro station in Moscow on the "extra" day of February. But we have not only to believe, but to somehow live with it.

Two days later, it became clear that the crime had been committed not by a crazy but quite sane creature: The nanny of the four-year-old girl, Gyulchekhra Bobokulova, talked about how she had killed the child, calmly and without a drop of fear or remorse, and was provocatively ironic in court, hiding behind Allah.

When questioned, Bobokulova explained that the murder was her response to the Russian bombing campaign in Syria. She does not have the familiar appearance of a terrorist, she is not a suicide bomber strapped with explosives, but Islamist ideologists who declared war on Russia have done a good job of warping her mind.

Her behavior, the way she hides behind Allah and revenge, looks like a demonstration of hatred and is intended to initiate a reciprocal wave of mass and uncontrolled aggression – an ethnic and religious massacre.

A native of Uzbekistan, instigated by a native of Tajikistan, dressed in a black robe associated with Islamic State (ISIS), who was waving the head of a murdered child and threatening jihad, is now smiling at the camera and blaming Russian troops for her crime. How could any, even the most sensible person avoid exploding?

Russian bloggers react to the nanny that decapitated a child

Meanwhile, social networks obligingly offer posters showing the crossed-out depictions of the outrageous scene with the killer nanny holding the child's severed head in her hands.

This image – looking as if it has been taken from ISIS manuals on how to intimidate their victims, a message to the unfaithful, threatening to kill the dearest to them, to cut off the head of their future – is being enthusiastically replicated by so-called patriots, Russian nationalists and even the Communists, playing into the hands of religious extremists, whom Russia is fighting in Syria.

In many ways, all of this is meant to bring the Russian person out of balance, to provoke a wave of hatred for all migrants from Central Asia and for Muslims in general, which is ultimately suicidal for Russia.

Acting on her own or on orders from radicals, Bobokulova could detonate interethnic and interfaith peace, which has more or less settled in Russia in recent years, giving the signal for mutual slaughter.

Her crime could result in possibly orchestrated attacks from right-wing football fans against migrants from Central Asia.

After that, in the event of a lethal outcome, the situation could escape the control of law enforcement agencies. Perhaps it is the fear of such a scenario that prevented major television channels, with the Kremlin's consent, from reporting on the killing and broadcasting the ISIS-like image of the killer nanny.

A test of maturity for Russia

There is no doubt that ISIS and other terrorists will intensify work in this direction and try to commit repeated terrorist attacks.

Losing in the open conflict in Syria to the Russian air force, they and their overseers are well aware of the weakness of Russia's southern underbelly and the opportunity to use the inhabitants of Central Asia as suicide bombers and distributors of extremism. ISIS activity has been seen in Uzbekistan since November 2015, and even earlier in Tajikistan.

In response to this threat, the ideas of introducing a visa regime with Central Asian countries, as well as all sorts of barriers against migrants, all the way up to complete expulsion, are becoming increasingly popular in Russian society. Some even discuss the need to build a "Great Eurasian Wall." In fact, we are talking about a total detachment from this region, which is strategically important for Russia.

However, this is a superficial solution to the problem. The relationship with Central Asia is actually a test of the maturity of the Russian Federation as the successor to the Soviet Union and the Russian Empire. For the last three centuries, the Asian vastness has been included, in one way or another, in the political space of Russia. Even before that, the Russians always interacted with the population of the large steppe, since there are no natural barriers between us.

Having turned into a Eurasian empire, Russia just needed to become the cementing force for the diversity of the peoples of this vast area. Offering the Russian state system to them, our ancestors inserted them into the Russian civilization on an equal footing, while preserving the Asians' national identity, but at the same time offering their rules of life and values as universal.

Material for a new ISIS army

In the very first 20 years, the humanitarian, state and technological degradation of the newly independent countries reached an incredible pace and put millions of people in Central Asia virtually on the brink of extinction. It turned out that they once again have to resort to Russia for salvation, this time in the role of unskilled guest workers.

Unfortunately, modern Russia has failed to provide other ways to restore our relationship, but it has been at least a prerequisite of survival for the Central Asians.

However, for the Russian state, which is going through difficult times to overcome its collapse and recovery, there has been at least some opportunity to keep the extremely important region, which is not called Central Asia for nothing, in its political orbit.

Any attempt to somehow dissociate itself from this center, to isolate themselves, to artificially turn Asian nations into barbarians outside the perimeter of "white civilization" will lead to a situation in which Russia will prevent itself from developing, will set unnatural limits for itself and allow other civilizations to use these countries and their population against itself, in particular as material for a new ISIS army.

The opinion has been abridged and edited.