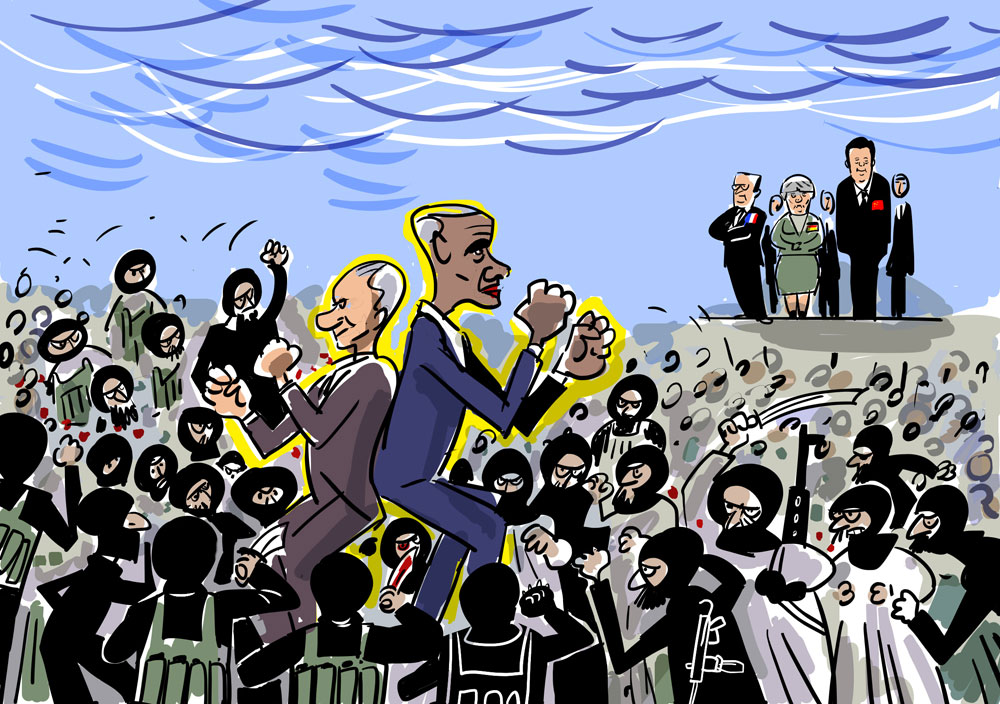 The situation in Syria has not unraveled, as many feared, and the primary drivers of any lasting resolution of the crisis remain USA and Russia.

Despite the gloomy prophecies of most commentators, the ceasefire in Syria is, on the whole, being respected, and feeble efforts to even revive the political process are being taken. Everything still stands on very shaky foundations, but the worst predictions have not come true.

If we look at what is happening in and around Syria, from the point of view of the international system as a whole, something very interesting appears. Twenty-five years of trying to build a new world order have vanished into thin air. Once again, just like in the previous era, the real “bosses” remain Moscow and Washington, with no one else having the power or capacity to make important decisions, and begin to implement them. This is sad news for international organizations, who are supposed to be ruling the world, and for the EU, whose independent role in the Middle East, a neighboring region of great importance to Europe, simply is not visible.

This does not mean that the former Cold War structure of the world system is being restored. Nonetheless, it clearly confirms that a new effective world order has not yet appeared – and the one reason for all of this – is the unresolved issue of Russia’s place in the new world order.

Threat of ISIS forces Russia back to Central Asia

Since the end of the Cold War, the entire period has been marked by a controversy as to what position Russia should occupy in the international arena. Although Russia is the successor state of the Soviet Union, its status in the global hierarchy cannot be compared with that which the USSR occupied. The latter, even during its declining years, experiencing acute difficulties and retreating, remained one of the two global pillars, a country, without which it was impossible to solve any serious issues. After 1991, Russia found itself in a strange position. Heir to a superpower, with almost all of its formal attributes, but a state, forced to work to overcome its severe systemic decline, dependent on the mercy of those who had till recently been its enemies. This without any recognized or proclaimed defeat in an armed confrontation.

Russia has tried, in various ways, to adjust to this situation. From actually agreeing with the fact that as a country it had no “national interests”, which would differ from those that the “civilized world” was aspiring to (the early stage, up to about 1994). Then simulating a global role through its presence (though without leverage) in major negotiations and diplomatic formats.

However, from the point of view of the outside world (mainly Western), Russia’s desirable place was well defined – as part of the “Wider Europe”. This concept took shape in the early 2000s, but was brought into practice much earlier. It included Russia’s presence in the European space, the core of which was the European Union (and NATO as well, though the Europeans have always emphasized that there was a difference between these two associations). It was understood that some of the former communist bloc countries would join these structures, while others would become only affiliated with them, through a voluntary (without membership) adoption of the EU’s rules and regulations. Russia was always considered as a special case. However, it was assumed that Russia would, eventually, take its albeit significant place within Europe, but be subject to a common chain of command in this future organization.

Russia was being offered a place in the European architecture, which by that time was not a global one. In contrast to the common European home, which Mikhail Gorbachev planned to build, and in which the Soviet Union was to act as an equal partner in co-designing a new universe around, indicating that the new European system was thought of as a regional one. Within such conditions, Moscow would reject pursuing its global aspirations, and within the Greater Europe, would live being subordinated to rules, created and developed without Russian participation.

For many reasons, Russia simply did not fit into the role assigned to it by the new world order, which was supposed to appear after 1991. One cannot say that Russia did not want this as well. Until the mid-2000s, Moscow somehow tried to settle into its proposed slot, trying to limit itself, and trying to expand this slot. However, very soon the entire construction of the 1990s began to slump and deform under the influence of changing external circumstances.

The events of 2014-2015, finally broke this construction, as far as Russia was concerned, which had existed for almost a quarter of a century. The operation in Crimea was a response to the steady progress of Western structures towards the east, which had not ceased during the entire post-Cold War period.

Russia rejected the idea of an EU/NATO-centric Europe in the strongest way possible, with the use of military force. The campaign in Syria was the next step. Russia had announced her determination to re-enter the global arena, as a key participant in processes, which do not involve it directly, but which are fundamentally important for the future balance of power. The consequences of the Russian campaign were not only to strengthen the regime of Bashar al-Assad, but also to reach an agreement with the United States on a cessation of hostilities and a resumption of the political process; all this, despite the extremely bad relations in the rest of the spectrum and sharp mutual recriminations.

The re-birth of Moscow as a global player is a necessary step to achieve an overall balance of power. But it is not enough and Russia must quickly do something about its economic policy. The state of the economy today will not allow the country to sustain a leading position in the world. In addition, the international system needs to expand the number of responsible nations which are able to solve problems, and not only create them.