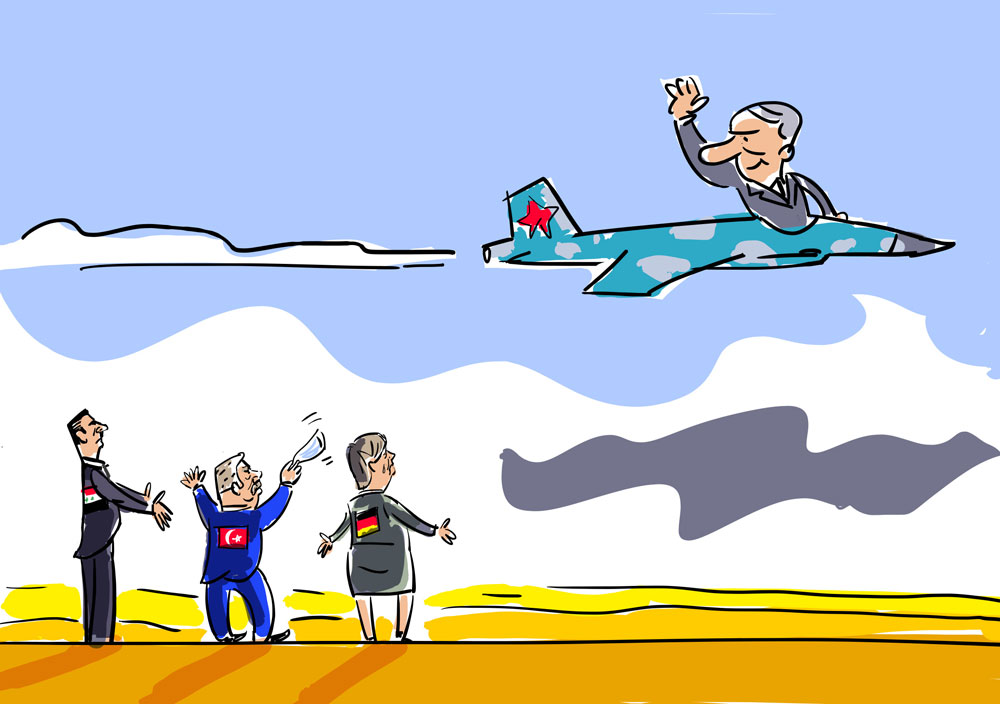 The Russian President’s sudden decision to pull Russian troops out of Syria has not only surprised the West but has engendered a significant number of conspiracy theories about the reasons behind the move.

There really was not much to be surprised about in Russian President Vladimir Putin’s decision to withdraw Russian troops from Syria. Putin goes to the end only when it concerns Russia's security or his plausibility as a leader. If such critical interests are not at stake, the Russian president fairly easily "leaves the process." He always "strikes first," something he has admitted on several occasions, but he always "leaves the battle first" also, if it can be done elegantly and without losses. This is the fundamental principle of Russian "political judo," which has been practiced for many years now.

The West while evaluating the consequences of Russia's operation in Syria, has in a certain way fallen into its own "trap of distrust of Moscow." From the beginning, the Kremlin had emphasized the limited nature of the Russian Air Force mission and its unwillingness to get involved in a ground operation. But the West continued suspecting Moscow of having some kind of "hidden agenda."

Moscow had said the operation would continue while the Syrian army was fighting the terrorists. However, when Assad's army began pretending to be besieging Palmyra but in reality concentrating its forces in the areas around Aleppo, Russia decided to end the operation. Moscow clearly demonstrated to Assad that it supports his fight against IS and other terrorist organizations, but not his attempts to use Russian military potential to solve the problems of his political survival.

Of course, Moscow's decision to wrap up the operation has a "second seabed," but it is also, as strange as this may sound, rather "transparent."

The Kremlin's decision is related in part to the growth of Russian-Iranian disagreements on a wide range of issues, including cooperation in the oil sector. But Moscow never hid the fact that it wanted to act in Syria as a driver of a large anti-terrorist coalition and considered itself a part of the "big picture."

Once Iran stopped being as cooperative as earlier and showed unwillingness to actively work in Syria (the departure of Hezbollah units from Syria began before Vladimir Putin announced his decision), one of the most important conditions for Russia continuing its operations simply disappeared. Instead, there appeared risks that the Kremlin justly preferred to remove at the earliest stage of development. Obviously, the current Iranian administration is determined to use the lifting of the sanctions to the maximum extent, demonstrating the country's capability to be a regional leader.

What is equally clear is Moscow's determination to shatter (Angela) Merkel and (Tayyip) Erdogan's propaganda tying Europe's migration problem with Russia's actions in Syria. The Kremlin's manoeuvre has rendered ineffectual this propaganda campaign, a campaign that irritated Putin, especially since the flow of refugees will unlikely recede. Considering the two-year political confrontation with Europe and the continuous renewal of the sanctions, the determination to use the European politicians' miscalculations is completely logical.

The limited pragmatism and a certain cynicism in contemporary Russian politics are directly contrary to the West's ideological and propagandistic messianic fervor. And, in its limited pragmatism today's Kremlin, as strange as it appears, is frank and limitedly open to interaction.

We should also not lose sight of the following: the Kremlin has usually been extremely sensitive to fluctuations of public opinion, all the more in periods of economic difficulty that are also related to its foreign policy. Even though the operation in Syria had the support of Russia's public opinion, which viewed it as yet another expression of the new foreign policy status, the possibility of a direct military clash in Syria with Turkey, and consequently the US, raised a logical concern both among the expert community and the relatively broad layers of public opinion.

It can be argued how realistic it was and how far Erdogan would have gone in his determination to preserve the "geopolitical" conquests he had made over the past years. But in Russia's public opinion such a possibility was considered entirely real. This showed the Kremlin the limits of a permissible escalation. Since the operation's military aims and the political objective to re-establish relations with Washington were already decided and announced, the Kremlin as usual did not want to take risks and create an unnecessary political tension in public opinion.

Now, after Russia's departure from the field of realpolitik in Syria, the West, and primarily the US, is faced with new challenges: will Washington be able to independently manage the built up situation and demonstrate decisiveness in practical politics?

The US is left alone with the region's political and military-political problems; not only with Bashar al-Assad, but also with Erdogan, who is becoming increasingly uncontrollable; with the Islamists, who have preserved their military and political potential; and with the Saudis, who are getting more and more involved in the internal crisis.

Is there life on Mars? Russia and Europe to look