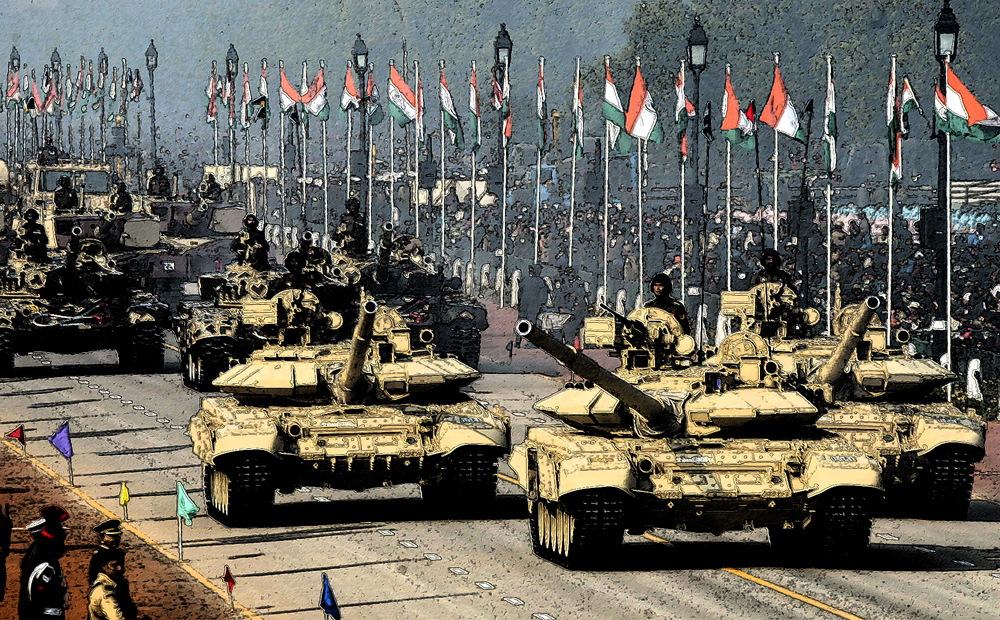 Claims that Russia is losing out in the Indian market is either a sign of incompetence or a deliberate falsehood.

AP
India’s Ministry of Defence has confirmed what Russian specialists have long known and Western analysts have tried to refute, that India’s largest defence partner remains Russia. Russia is the only country that has taken the ‘Make in India’ principle advocated by Prime Minister Modi as the bedrock of its defence cooperation with India.

An official statement from India's Defence Ministry states that on Indian arms imports, Russia is, by some distance, India's biggest defence partner. Between 2012 and 2015, Moscow supplied India with military equipment worth over five billion dollars. The USA ranks second, with exports to India worth $4.4 billion.

The situation is practically the same with arms contracts. Out of India's 67 arms contracts with other countries, 18 are with Russia, 13 with USA, and six with France. This clearly indicates that claims by Western analysts that Russia is losing its market share in India, that cooperation between Delhi and Moscow is becoming less important, that the Indian army no longer needs Russian weapons, and so on, are just the latest in their series of canards.

On the other hand, the Indian Defence Ministry's statement, that Russian arms and military equipment manufacturers occupy the primary position in the Indian arms market, held no surprises for Russian analysts.

More than 70% of the tanks, self-propelled guns, multiple launch rocket systems, fighter aircraft, bombers, attack aircraft, airborne early warning and control aircraft, helicopters, aircraft carriers, frigates, nuclear and diesel-electric submarines, missile boats and coastal defence system equipment used by India's army, air force and navy have been made in Russia or the Soviet Union. Around 40% of the Indian army's military equipment today has been made in Russia or assembled locally under a Russian licence. That proportion rises to 80% in the air force, and 75% in the navy.

Therefore, claims that Russia is losing out in the Indian market is either a sign of incompetence or a deliberate falsehood. Equally, however, it would be folly to pretend that Russia has a monopoly in India's defence cooperation with other countries. That is not, and has never been, the case, and has never been sought. Not by New Delhi, nor by Moscow.

When the Western media gloatingly chides Russia for losing a contract to supply Delhi with attack helicopters, they conveniently forget or ignore that, prior to this, India bought 150 Mi-17V-5 transport helicopters from Russia, that it intends to produce 200 Ka-226T Russian light helicopters at its factories, and that it is interested in Russian S-400 and Tor-M2KM anti-aircraft weapon systems, Pantsir-S1 surface-to-air missile system and other offensive and defensive hardware.

The principled and ambitious objectives that India's leaders have set its army and defence industry are another matter. One of those principles is to diversify its defence procurement and put an end to its dependence on any single country, even one as friendly, open and responsible as India's partner of many years, Russia. The second principle being insisted upon and actively promoted by India's Prime Minister Narendra Modi is not to buy military hardware abroad, but to produce it locally, according to its ‘Make in India’ programme.

Nothing wrong with wanting

Putting both principles into practice is not easy. Delhi, however, is managing reasonably well with the first principle. The fact that it has a number of arms contracts with the USA and France, as well as with Germany, Israel and even Brazil speaks for itself. The same goes for the contracts won by Russia’s competitors. But implementation of those contracts has not always met the requirements laid out by the Indians in the tender process. The case of France's ‘Rafale’, a multirole fighter aircraft, is a particularly clear example here.

Russia is the only country in the world that has taken the ‘Make in India’ principle advocated by Prime Minister Modi as the bedrock for its defence cooperation with India.

Take the Su-30MKI, another multirole fighter aircraft. It was designed in Russia especially for India. And the letter "I" in its name specifically shows that. The aircraft, which has French, Israeli and Indian avionics on board, is produced in Indian plants under Russian licences and using Russian technologies. India's specialists have not yet completely familiarized themselves with it, and some of the aircraft's components are imported from Russia, but that proportion is decreasing with every year as India becomes one of the world's leading air powers.

It is a similar story with the T-90S tank. The vehicle was developed and built by Uralvagonzavod for supply to the Russian army. But India is now the primary customer. At the same time, India does not just buy the "Vladimir", as the T-90S is called in the forces, but also makes them at its own plants, again under a Russian licence, with some parts supplied by Russian factories for assembly in India. The Indian army already has about 350 T-90S tanks, and Delhi is reported to be planning to increase that number to 1500.

The ‘Make in the India’ principle has been particularly clearly seen in the Indo-Russian supersonic missile ‘BrahMos’. This is being produced by India's Defence Research and Development Organisation (DRDO). Some components are being made by Mashinostroyenia, a defence research and manufacturing cooperation from Reutov, near Moscow, and the rest by the DRDO.

India has installed the missile on its Talwar-class frigates, which, incidentally, were also built in Russia, at the Severnaya Verf shipyard in Saint Petersburg and Yantar shipyard in Kaliningrad, and on its upgraded diesel-electric improved-kilo (Varshavyanka) class submarines. India is using them in its coastal defence system, and deploying it on its Tu-142 and Il-38SD aircraft. At present, a new, lighter and shorter version of the BrahMos missile for the Su-30MKI fighter aircraft is undergoing testing. Delhi is very proud of this, and intends to export it to third countries. India plans to build a hypersonic missile based on it, and Russian specialists are helping it with this as well.

And this, Russian specialists believe, is one of the key aspects of shipbuilding. They recall that the US has never shared its know-how with anyone. The weekly Defense News, a publication well known in military circles, has reported that Delhi and Washington recently discussed the possibility of cooperation in aircraft carrier technology, but sources in India's Ministry of Defence said no agreement had been reached. There are similar difficulties with the French, who, as far as we know, do not intend to share even the manufacturing processes for their Rafale fighter aircraft with Indian specialists, even though they are contractually obliged to do so. Russia, by contrast, is ready not only to build an aircraft carrier and transfer the necessary technology to India, but even to builod a ship-based version of the fifth-generation fighter aircraft on which Moscow and Delhi are currently working together. Furthermore, India already has the ship-based MiG-29K fighter, which it is ready to deploy not only on the Vikramaditya, but also on any other ship in its class.

Russia is the only country in the world that is leasing a multirole nuclear submarine (namely, the K-152 Nerpa (Project 971)) to another country (namely, India, which calls it the ‘Chakra’). Armed with torpedoes, it is considered one of the quietest submarines of its type. Our ally's sailors are using it not only for training purposes, but also to explore the possibility of building a similar vessel at their own shipyards. At the moment they also intend to lease another, similar nuclear submarine currently being built at the Amur Shipbuilding Plant.

There are numerous reasons for this unprecedented cooperation between Russia and India in the defence sector. One is that Moscow has had no serious conflicts with Delhi in over 60 years, whoever has been in government; conservatives, democrats or the Indian National Congress party. Russia has always had an open, mutually respectful and sincere relationship of friendship and trust. In sickness and in health, as the saying goes, the two countries have always been together. I am confident that this will continue to be the case.

Yes, we might fail to win this or that contract. For all sorts of reasons; because India wants to obtain and adopt arms from other countries, not just Russia, because it wants to avoid creating a monopoly and depending on a single supplier.... But what is important is not winning any particular contract, but the trend, and that is towards Indo-Russian cooperation now and in the future.

The article is abridged. Read the full version in Russian published by Nezavisimoye Voennoye Obozreniye.