Why Putin and Rouhani are travelling to Baku 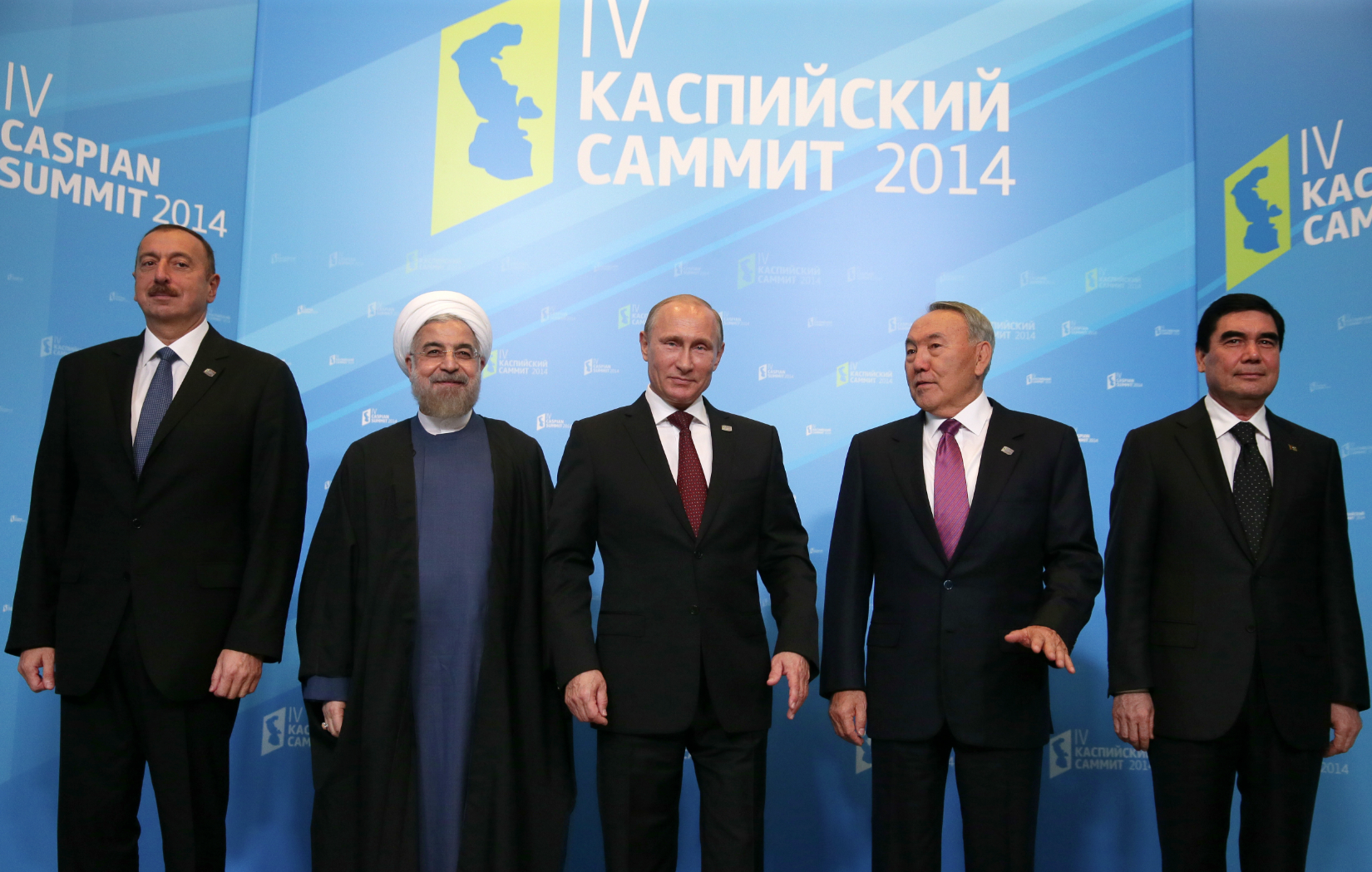 The tripartite meeting between Putin, Aliyev and Rouhani may occur in August.

Mikhail Metzel/TASS
The presidents of Iran and Russia are travelling to Azerbaijan next month to speak with their counterpart in Baku about gas projects, the North-South Corridor, Karabakh and regional issues.

The press has written that Russian President Vladimir Putin is travelling to Baku to sign new arms deals. Vladimir Dorokhin, the Russian Ambassador to Azerbaijan, practically confirmed this. In an interview with ANS TV (quoted by the Internet portal ‘Moscow – Baku’) he said Russia continues supplying arms to Azerbaijan, and new contracts will be signed.

Commenting on Putin’s visit to Baku, Dorokhin said, “Many questions have accumulated that need to be discussed by the presidents of our countries. Putin will not be coming empty-handed. In Azerbaijan, they are also preparing for this meeting. They will analyze what has been done and what remains to be done. New orders will be given. Therefore, the Russian President is coming on a working visit, not just for show. This visit will contribute to improving Russian-Azerbaijani relations.”

That “Putin will not be going empty-handed” is understandable, but what exactly he will be bringing remains unclear. However, it is clear that the Russian President will discuss the Karabakh issue with Azeri President Ilham Aliyev. (Armenia has already said it considers it unthinkable that Karabakh could ever be part of Azerbaijan.) They will also discuss logistics and creation of transport corridors for export of natural gas from Russia and Caspian Sea countries.

About the Karabakh conflict, although Dorokhin has not confirmed this, there is talk of sending peacekeeping forces into Nagorno-Karabakh. However, Russian Foreign Minister Sergey Lavrov recently visited Baku, meeting with his counterpart Elmar Mammadyarov and President Aliyev. According to official information, the leaders discussed bilateral cooperation issues of “strategic importance”, and the situation in Nagorno-Karabakh. Lavrov added that he discussed issues related to the North-South Transport Corridor in Baku, and “in the near future, a trilateral meeting of the presidents will take place on this issue.”

The North-South corridor is a large-scale transportation project, promoted by Moscow, Baku and Tehran. The corridor, between St. Petersburg and Mumbai (India), is over 7000 kilometres long. Full-scale implementation of this project became possible with the lifting of sanctions against Iran. This corridor, designed to transport goods from India, Iran and other countries to Russia via the Caspian Sea and further on to Western and Northern Europe, will compete with the Suez Canal. Azerbaijan is one of the key components of this corridor.

Looking at the current geopolitical situation under which the presidential “troika” will discuss implementation of this project and other pressing issues; who could throw a spanner in the wheel, to spoil relations between Putin, (Hassan) Rouhani and Aliyev? What would be the reasoning behind such a move?

The West is interested in blocking Russian gas supplies to whichever market. It is also known that the West does not want to see rapprochement of Turkey, and Iran with Russia, while both of these countries are trying, each in its own way, to open an energy “window” for themselves; the more “panoramic”, the better.

Iran is looking for ways to sell its natural gas to new markets, while assuring Moscow that it will not be competing with Russia. Turkey wishes to become a gas hub, an idea that was made impossible by Turkish foreign policy positions, and its spoiled relations with Russia.

Nevertheless, these relations, apparently, can be mended, for the sake of political and economic benefits. It is possible that pragmatism will encourage both sides to unfreeze the Turkish Stream project, which would see Russian gas exports go to Turkey, and from there continue to Europe.

Rumours have appeared that Moscow and Ankara, with the hope of resuscitating the Turkish Stream, were trying to derail a pipeline project that would go from Iran to Iraq and Syria, and then to Greece though a pipe under the Mediterranean Sea. We will discuss realistic possibilities for the Iranian project a bit later, but for now can only guess that the artificial pressure and tension, when it comes to Iranian gas exports, is intended to spoil Russia-Iran relations, and at the same time – sock Turkey on the nose.

Iran.ru has written that “Information is being spread that Washington is ready to make a deal with Bashar al-Assad, if he agrees to allow Iranian gas to pass through Syrian territory on its way to the European Union, in order to displace Russian gas.”

However, we need to come back to reality when looking at exporting Iranian gas to the EU through Iraq and Syria. Suffice it to say that a real war is currently being fought there, and to build a pipeline through the two countries is akin to throwing money down the drain. Second, the objectives and tasks of the United States in Syria are much more serious than displacing Russian gas in Europe. So a “deal” with Assad is practically impossible because of the different “weight category” of the gas issue, and future fate of the Syrian leader.

This means that information about the deal between Washington with Assad has been “spread” in order to force Russia to look at Assad with “different eyes”. Moreover, the talk about Russia trying to disrupt Iran’s gas plans is designed to spoil Moscow’s relations with Tehran. For Ankara, implementation of the Iranian project would weaken interest in the Turkish Stream and have Russia and Turkey move apart, given the decrease in cooperation on common projects.

Ideally, for Turkey, which is dreaming of becoming a gas hub, it would be good to implement the Iranian transit route, and the Turkish Stream, and the Trans-Caspian gas pipeline. However, what is good for Turkey turns out to be bad for many global players, in particular for the United States, Iran, Russia and the EU.

Everyone has their own arguments. For Russia and Iran, the Trans-Caspian gas pipeline means loss of the European market. For Iran, the transformation of Turkey into a gas hub means strengthening the position of this country, not only in West Asia, but also in Europe. Tehran would prefer, as much as possible, to cover Turkey’s domestic needs for gas, but does not wish to strengthen Ankara’s transit opportunities and, consequently, political influence.

The US and the EU, though wishing to limit Russian supplies as much as possible nevertheless, for political reasons, are afraid of having Turkey transform into a gas hub. Therefore, they will be supporting transit through Turkey “cautiously.” For them, the Trans-Caspian gas pipeline is enough, although for now it is only at the level of wishful thinking for the EU and the US. In such circumstances, things seem somehow ironic in light of the recent sanctions against Iran. Europe and the United States will, also cautiously, “push through” the Iranian projects, some of which will increase tensions in Russian-Iranian as well Russian-Turkish relations.

Thus, the ancient maxim of the Roman Senate; “Divide and Conquer;” applies just as well in our times and, to some extent, in various modifications, this will probably come up at the tripartite meeting between Putin, Aliyev and Rouhani, and during bilateral talks between the presidents.

Speaking plainly, their main task today is not to get into dead-end fights over Karabakh, Syria, Turkey or hydrocarbon competition, but to come closer in their positions on security and the legal status of the Caspian Sea. That is the minimum programme.

In Baku, Lavrov discussed with his Azerbaijani counterpart the normalization of Russian-Turkish relations, the aggravation of which had placed Azerbaijan in a very difficult situation, given its interest in strategic partnerships with Moscow and with Ankara.

As Mammadyarov noted at a press conference in Baku, his country only welcomes normalization of Russian-Turkish relations, because “the more predictable these are, the better it is for Azerbaijan.”

First published in Russian by Rosbalt.