The NSG debate and the state of India-Russia relations 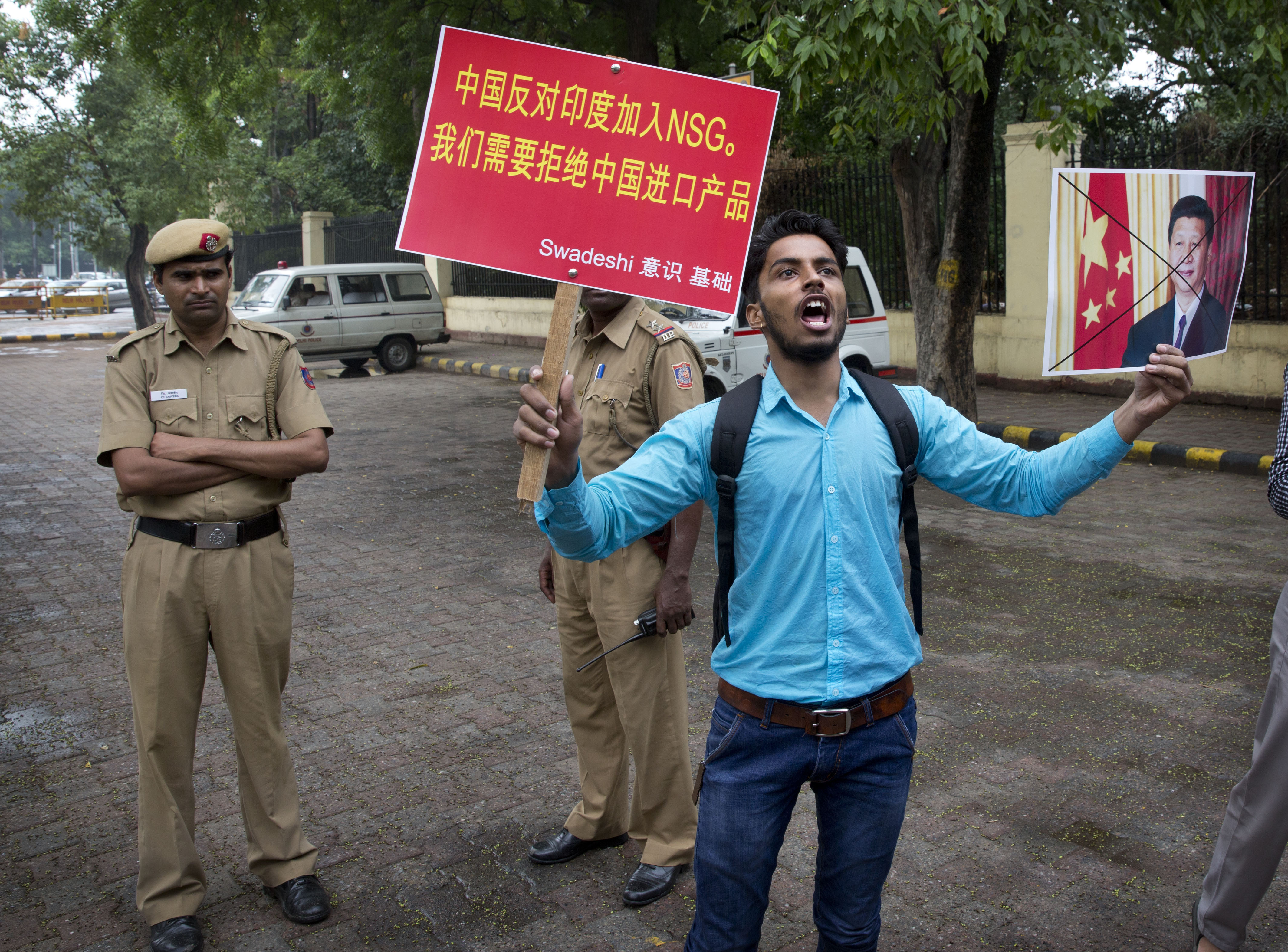 An activist holds a portrait of Chinese President Xi Jinping and shouts slogans during a protest near the Chinese embassy in New Delhi, June 28, 2016.

AP
Concerned that Russia appears to have lost some salience in the Indian public mind, the writer has some suggestions for authorities on both sides.

The dust has settled down on one of the most hotly discussed issues in Indian foreign policy i.e. the debate on India’s failed entry to the Nuclear Suppliers Group (NSG). The key points in the debate was whether India should have invested so much political capital on joining the NSG with the Prime Minister himself leading the attempt. The debate also brought out in the open those who advocate a closer relationship with the US and want to be part of the effort to contain China; and those who want to avoid such an alliance. This debate will undoubtedly define the contours of the Indian strategic debate for many more decades till, if at all, New Delhi makes a choice between Washington and Beijing.

However, what was remarkable about the debate was the complete lack of the “Russia narrative” in  stories in the Indian media. While most newspapers and television channels mentioned Russia’s support for India at the NSG summit, these were only cursory remarks.

This, despite the fact that  Russia has consistently supported India’s membership in all the export control regimes and is a major partner in India’s quest for nuclear energy. It is also the only country to have leased India a nuclear submarine, an affirmation of its faith in India’s non-proliferation record. The focus was on the US’ support and China’s opposition and its insistence on a norm-based membership for India. This is despite the fact that Prime Minister Narendra Modi on his return from the US last month made a phone call to President Putin seeking his intervention with China for India’s membership in the NSG.

Later, in an interview to an Indian journalist, Putin revealed that he had had “honest discussions” with China on the issue, implying that at least he made the effort of taking up the issue with the Chinese even if, as subsequently proved, he was not able to convince them. This is a far cry from the American position today. In 2008, President George W Bush made a phone call to President Hu Jintao to seek his support for an India-specific waiver in the NSG. Consequently, the Chinese did not oppose the waiver. However, this time around, PresidentBarack Obama did not put in a personal effort or call up President Xi Jinping asking him not to oppose India’s inclusion in the high-profile club.

In any case, the lack of the “Russian narrative” in the NSG debate in India is reflective of the larger malaise bogging India-Russia relations as well as to the structural deficit in the conduct of Russian foreign policy.

India-Russia relations have been taken for granted by leadership as well as the media in both countries. It is, as the head of the Carnegie Foundation in Moscow, Dr Dmitri Trenin, says, an “orphaned relationship”. The political leadership in either country seems reluctant to nurture ties and seems to have other priorities. In India, it is taken for granted that Russia will not stand in the way of India’s global ambitions and will support India in all international forums. The only way Russia would have got some media coverage would have been if it had opposed India at the NSG!

Second, the episode shows the complete lack of outreach by Russia to Indian media outlets and to the Indian people. If the US had been in the same position as Russia, it would have milked its support for all it was worth. As it is, the US has ensured that it has come out of this episode smelling of roses, barring a few exceptions. This lack of outreach by Russia to India has meant that its soft power in India is on the wane. Though Modi has said that “Ask any child in India who is India’s best friend internationally and they will tell you that it is Russia”, Russia has lost salience in the minds of Indian elites, who have far closer familial and educational ties with the US. This loss of soft power can only be dealt with through more people-to-people contacts and contacts between Indian and Russian media, think tanks and academia. More opportunities, more cultural festivals and more scholarships will have to be established. Having a more relaxed visa regime, particularly for conference visas, would also help.

Finally, the NSG episode illustrates the structural deficit in the conduct of Russia’s foreign policy—its inability to get the international media to write positive and sympathetic stories about it. One example of this is the explosion of the Russian aircraft over Egypt early this year, killing all 224 civilians on board. The global sympathy for the Russians was muted despite it being a terrorist attack. Contrast this to the global grief after the crash of MH 370! Another example is Russia’s intervention in Syria, which has helped reduce the strength of the ISIS. There were few articles lauding Russia for its role.

This, of course, is because of the domination of media by the West. Given the estrangement between the West and Russia, one can hardly expect Russo-philic stories from international media. But it only goes to show how much more Russia will have to work at for getting its story heard across the world.

This is true also of Russia’s relations with India. Shutting down Sputnik International’s Urdu and Hindi websites is certainly not the way to go, and is a worrying sign for the future of Indo-Russian relations.

Uma Purushothaman is an Assistant Professor at the Department of International Relations, Central University of Kerala, India.