Russia-Iran connections: what are they? 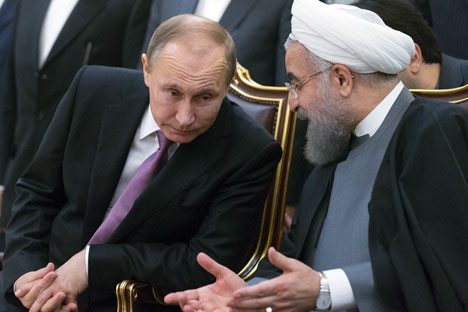 Moscow and Tehran have contradictory interests.

AP
Russia’s ties with Iran are extensive and are too complex with some differing interests for them to become full-fledged allies. Cooperation in the economic field can, however, be very fruitful for both.

Governments in Russia and Iran have always cooperated. Even during the reign of Shah Reza Pahlavi, who was swept by the 1979 Islamic revolution, Iran and the Soviet Union actively cooperated in industrial projects, and Tehran bought Soviet military hardware. Under the Shah, who was considered to be a key U.S. ally, the Soviet Union built a major repair plant for armoured vehicles, ‘Babak’, which has lasted until the present day.

After the Islamic revolution, bilateral relations have become more complicated and confusing. This began from Iran’s denunciation, soon after the 1979 Islamic revolution, of articles 5 and 6 of the Soviet-Iranian Treaty of 1921. These were very sensitive for Moscow, since they contained mutual obligations to prohibit the presence of troops hostile to Russia or Iran within their respective territories. But cooperation in various fields continued even during fierce ideological debates between Moscow and Tehran, which was frequent over the past decades.

Today, there is a new surge of Russian-Iranian cooperation, which has outraged the West. However, contrary to popular belief, most of these projects lie in the field of economy. Certainly, Russia and Iran both support the regime of President Bashar al-Assad in Syria. The Russian air force, in August 2016, used Iran's Hamadan airbase to deploy its strategic aircraft in Syria. However, the economic component of cooperation is considerably more significant.

The balance of interests

Moscow and Tehran have contradictory interests. Both Russia and Iran are interested in sharing the Caspian Sea's resources, but their practical approaches are based on the desire to retain the regions with the most important oil and gas reserves.

Russia and Iran have common objectives to confront the Salafist movement in West Asia and Central Asia. However, they are aimed at strengthening the forces they control in these regions. In addition, Iran is seeking rapprochement with the West, which cannot help but affect its relations with Russia.

Moscow attributed the failure to convert the Hamadan airbase into a permanent base for Russian aircraft to the tendency of certain circles in Tehran to play along with Washington.

The conflict in Syria has also revealed differences in the approaches of Russia and Iran, both in political and military aspects. This is in spite of the common commitment to support the Assad government.

Russia seeks to develop relations with all the Persian Gulf countries, including cooperation in the military sphere. During his recent visit to Moscow, for example, the King of Bahrain is said to have discussed the possibility of supply of Russia's sophisticated anti-aircraft missile systems S-400. Iran is in a state of intense competition with these countries, and almost in a state of military confrontation with Saudi Arabia – after the execution of Shiite preacher Nimr al-Nimr by the Saudi authorities.

Cooperation, therefore, between Russia and Iran is an example of the extremely complex interaction of two countries that are inherently competitive – both politically and economically – but try to limit this competition to foster close cooperation in those areas where their common interests prevail.

Simultaneously, Moscow is extremely sensitive about the West's attempts to exacerbate Russian-Iranian contradictions and play them, considering this policy to be aimed at destroying the partnership between Russia and Iran, and stimulating the Shiite state's hostility toward Russia and its partners.

The common interest is in development and stability

Iran today is in a very difficult socio-economic situation. If the current, relatively liberal leadership in Tehran is not able to provide proper progress in the socio-economic sphere, which could be perceived by the population, then it may cause a new wave of Shiite fundamentalism in society and bring relations between Iran and the West back to the time of President Mahmoud Ahmadinejad (2005-2013), which was characterized by tough and continual confrontation.

The success of the Russian-Iranian cooperation in the economic field, contributing to strengthening the position of the "moderates" in Tehran, is in the interests of the Western countries. Ultimately, the European Union countries are also interested in stability in the Middle East, as well as in participation in the new Iranian modernization, the ground for which Russia is preparing today.

The writer is a Professor of the Higher School of Economics.