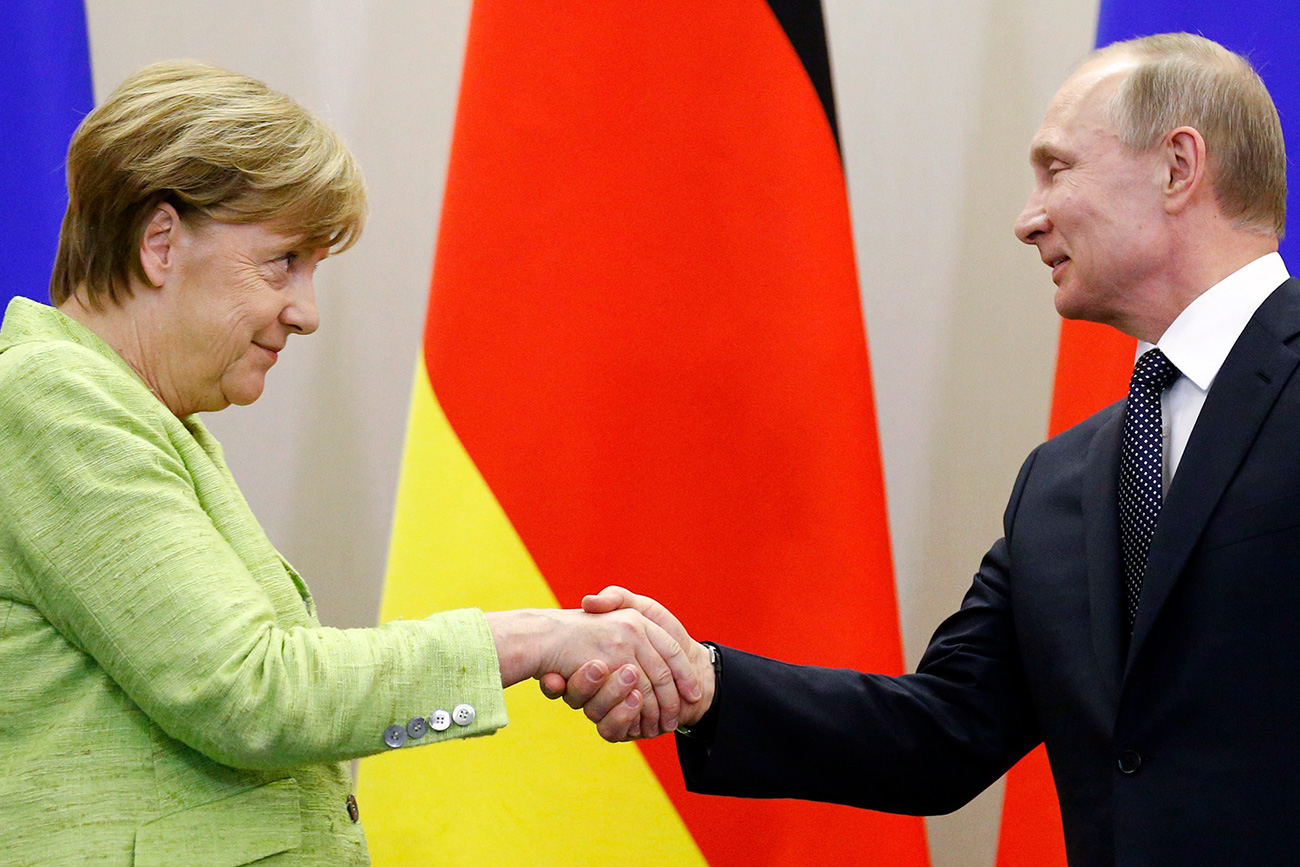 "Putin’s desire 'to fully normalize' bilateral relations was nothing but unilateral wishful thinking." Photo: Putin and Merkel shake hands during a joint news conference in Sochi, Russia on May 2, 2017.

Reuters
The two rounds talks between Vladimir Putin and German Chancellor Angela Merkel in Sochi could be assessed as a modest ‘warming up’ of cooled relations, if it were not for the new Berlin wall the EU keeps erecting around Russia.

After two years in the wilderness, and regular verbal sparring at summits focused on the Minsk agreements and a truce in Eastern Ukraine, relations between Chancellor Angela Merkel and President Vladimir Putin may be thawing. However, we should err on the side of caution.

Preparations for the G20 in Hamburg in July were used as a pretext for the high-level talks between the two leaders, but tensions were still bubbling menacingly. Merkel’s first visit to Russia since 2015 may signal renewed dialogue but serious rifts remain.

In fact, the scenic setting of the meeting, the renovated Black Sea resort of Sochi, could hardly soften the two leaders who remain at odds over a plethora of foreign policy issues.

Merkel and Putin discussed the shaky endgame phase (or is it?) for the civil war in Syria, the deadlock over the further drifting apart of the self-proclaimed rebel republics in Donbass and the central authorities in Kiev, the noble cause of fighting international terrorism, and the sour state of bilateral relations.

On the eve of Merkel’s trip to Sochi, Steffen Seibert, spokesman for the office of the German Chancellor, made it clear that "there are two topics that weigh down relations... the annexation of Crimea contrary to international law and the destabilization of eastern Ukraine" by what he termed as "pro-Russia" forces.

After the stakes were upped, it became clear that Putin’s desire "to fully normalize" bilateral relations, expressed during the meeting with German Foreign Minister Sigmar Gabriel in March, was nothing but unilateral wishful thinking.

Neither side could cross certain red lines. Moscow has been apprehensive about Germany’s adventurous policy, that in 2014 placed bets on the coup d’état in Kiev to draw Ukraine closer to the West as an alternative to its balanced stance.

The EU association member status was to be granted at the expense of Ukraine’s historic, cultural, and mutually beneficial economic integration with Russia.

The de facto support rendered by Berlin to force –  in American neocons’ parlance – "regime change" in an European country was viewed in Moscow as a short-sighted self-serving violation of international law. It caused the more industrialized and technologically advanced regions of Donbass to rebel against foreign interference in Ukrainian domestic affairs.

Additionally, there is the contentious issue of the so-called "annexation" of Crimea stirring tensions.

After the declaration of independence was adopted on Feb. 17, 2008 by the Assembly of Kosovo in a meeting attended by 109 of the total 120 members, Germany accepted the emergence of a new state, which was still formally a province of Serbia.

Moscow and Berlin also do not see eye-to-eye on the legality of the referendum in Crimea when 95 percent of residents voted to rejoin the Russian Federation. Given Kosovo’s precedent, the German government is employing morally questionable double standards. 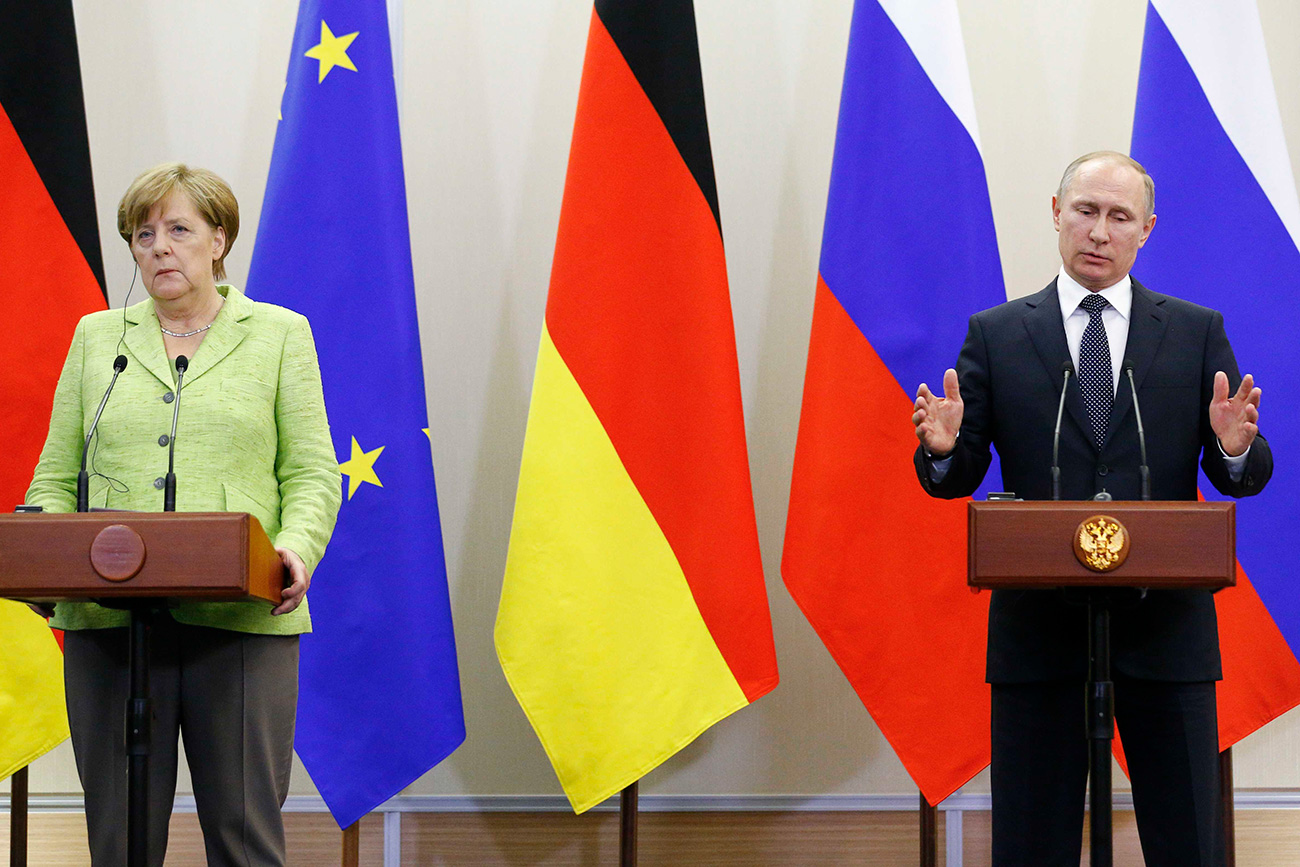 Germany spearheaded the introduction of EU sectoral sanctions in 2014 and has been backing the prolongation of the discriminatory regime ever since.

In 2012, bilateral trade between Germany and Russia reached a remarkable level of $89.8 billion. At the time German exports to Russia were worth some $42 billion. Then trade shrank. In 2015, German business contracted to Russian businesses managed to sell goods and services worth a comparatively meagre $24.5 billion.

Countermeasures by Moscow knocked relations down yet another level. In April, Idriss Jazairy, UN Special Rapporteur on the negative impact of the unilateral coercive measures, made an assessment: "The loss of the countries that have imposed sanctions (on Russia) amount to more than $100 billion. If we add to this the losses suffered by Russia as a result of sanctions, a very approximate estimation, which can be applied, is that Russia has lost one percent of GDP."

Actually, Russia’s losses were estimated by Jazairy as twice as small as those suffered by the West. Germany was one of the losers.

Yet, "some 5,200 companies with German capital investment have stayed in Russia and are preparing for the economy to pick up again," comments the Federal Foreign Office of Germany (MFA).

Experts from Germany’s MFA also point out that in 2016, "there were signs of a slight upturn in German-Russian trade relations, including direct German investment in Russia which increased to $2.2 billion in the first half of the year."

Nevertheless, damage to bilateral trade relations has been done and missed business opportunities are still accumulating.

"An ongoing confrontation would be costly for us in Europe. Both sides need each other to solve fundamental European and international political questions," Wolfgang Büchele, chairman of Germany’s Committee on Eastern European Economic Relations, said on the eve of Merkel’s trip to Sochi.

What’s even more disturbing for the Germans is the hypocritical policy by competitors. "Europe lost almost 20 percent of its trade volume due to sanctions, meanwhile the United States, which pressured the EU to join the anti-Russian economic measures, actually increased its trade with Russia by seven percent despite sanctions," World Bank consultant Olivier d’Auzon said.

It’s hard to dispute the facts. As Bloomberg also noted, "Since leading the push for western penalties on Russia over Ukraine two years ago, the U.S. has leapfrogged Turkey, Japan, Poland, and South Korea to become the country’s number five trading partner outside the former Soviet Union."

Against such a "controversial” record of going to war with Russia, Merkel faces mounting opposition within the German political class and business elite.

The already agonizing split between the CDU and the CSU over the issue of un-absorbable refugees and migrants was aggravated by the pragmatic approach to dealing with Russia by CSU leader Horst Seehofer. The CDU-CSU ruling alliance’s regular squabbles do not score points with the electorate.

To rub salt into the wound, Willy Wimmer – Germany’s former state secretary to the defense minister, and member of Angela Merkel's party – asserted after visiting Crimea that pursuing anti-Russian policy is a crime against Europe. 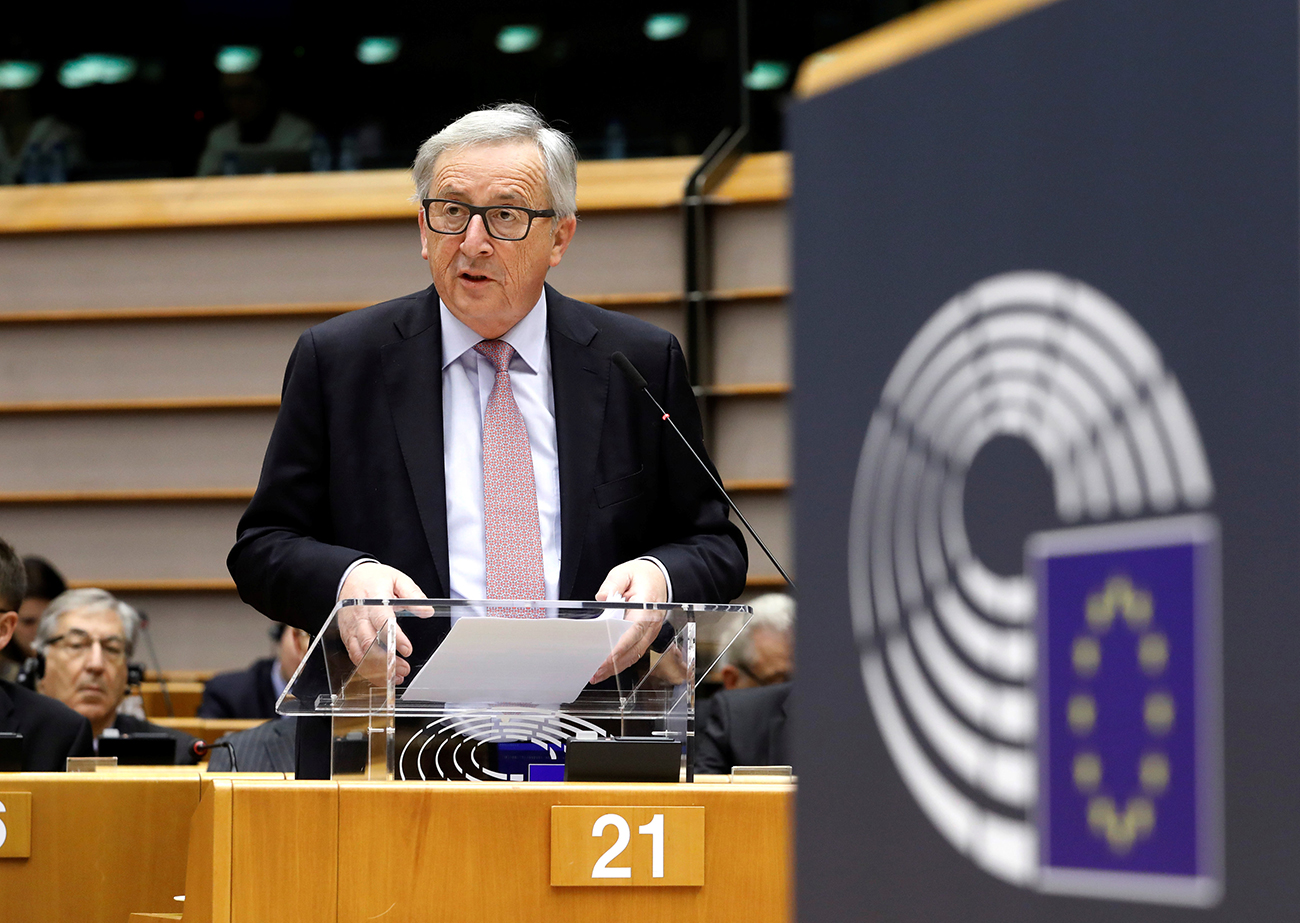 Pre-election mathematics are also outlining how "embattled" Merkel is on the home front. A poll in February showed that if the Social Democrats (SPD) team up with the Left party and the Greens and create, according to the German political color-coding system, a red-red-green coalition, it would master a ruling majority if elections were held in a week's time.

Recently, aware of the controversial credentials of the former communists (Left party) for the conservative electorate, the SPD started flirting with the liberals (code colour – yellow) hinting of the possibility of a “traffic light” or a red-yellow-green coalition.

In either of the two scenarios, counting in the "Schultz factor" (the SPD leader has positioned himself as Germany's Robin Hood eager to rob the rich for the sake of the poor), the prospect of Merkel winning a fourth term is by no means a given.

Trump on their mind

The third party, invisible yet omnipresent, at the Sochi rendezvous was U.S. President Donald Trump. After acting on impulse from his daughter Ivanka and bombing a government air base in Syria over a reported chemical attack that has not yet been investigated by international inspectors, Trump proved his credentials as an unpredictable "sheriff in town" after he moved into the White House.

It came in the wake of rather unconvincing results following the first encounter between Merkel and Trump, which was overloaded by American demands, instruction to the EU and Germany in particular, and disagreements over the refugees issue, free trade agreements, and the U.S. commitment to NATO.

The confusing American sabre-rattling in North-East Asia against  North Korea, most probably aimed at China, left South Korea and Japan in deep although hidden anxiety over whether or not the "new sheriff in town" would blow out their neighbourhood.

Europe took due notice of this muscle flexing and was not comforted by what it saw. Understandably, while discussing thorny regional conflicts, and there are many, Merkel and Putin must now view Trump as a loose cannon they can’t control.

Ready to face the unpredictable?

As predicted, the Sochi encounter produced no breakthroughs. Naturally, it was not expected to be a turning point in the dire relationship  between Germany and Russia.

The gap in political vision, moral standards, and even managerial style between Putin and Merkel is too wide to bridge with one-off talks.

At best, it might be viewed by Moscow as a sporadic conformist gesture on the eve of the G20 summit and the September electoral crush-test for Merkel. It could be judged as a gesture with little meaning and few consequences.

However, the Sochi showdown was not simply a load of hot air. It was a timely check-up of intentions amid the enhanced risk of Western politicians and media falling into the trap of their own bellicose, and irresponsible, forecasts of a looming WWIII.

The thought of another world war – so dangerously popular with spin-doctors in the 'globalist' media –  could delay the rupture of the U.S. debt bubble and prevent the rise to prominence of the non-Western centers of economic and geopolitical power.

But above all, the Sochi summit must have tested both the pragmatism and patience approach of Berlin and Moscow set against the aggravating unpredictability of global politics.

Read more: Can NATO and Russia avoid a war in Europe?>>>