Scientists find the elements of the meteorite 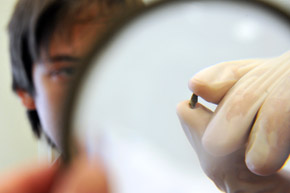 A research worker of the Ural Federal University inspects a fragment of a material substance in Yekaterinburg, the province of Sverdlovsk capital in the Ural Mountains, February 18, 2013. Scientists, representing the Ural Federal University, announced on Monday they managed to find elements of the meteorite in the district of the Cherbakul Lake near Chelyabinsk which was later confirmed during a research analysis at a laboratory, according to local media. A meteorite streaked across the sky and exploded over central Russia on Friday, raining fireballs over a vast area and causing a shock wave that smashed windows, damaged buildings and injured 1,200 people. Source: Reuters