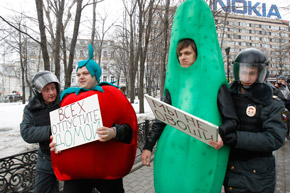 Police detain protesters, dressed as a cucumber and a tomato, during a rally held by opposition supporters in central Moscow on April 6, 2013. Protesters demanded the release of anti-government activists detained at Moscow's Bolotnaya Square on May 6, 2012, the eve of Putin's inauguration. The signs read "We are not vegetables" (R) and "Release everybody home". Source: REUTERS/Sergei Karpukhin