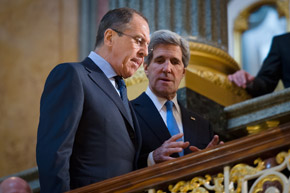 Russia's Foreign Minister Sergei Lavrov speaks to US Secretary of State John Kerry during the G8 Foreign Ministers meeting held in London on April 11, 2013. Kerry and other G8 foreign ministers were to hold a second day of talks in London focused on Syria after rebels renewed their appeal for weapons. Source: AFP / East News