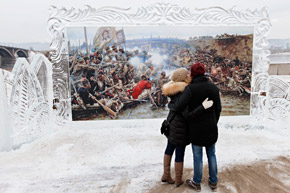 A couple look at reproductions of creations by Russian classical painter Vasily Surikov, which are on display in ice frames, before the opening of the 2nd International festival of snow and ice sculpture called "The Magical Ice of the Siberia" on the bank of the Yenisei River in Krasnoyarsk, January 13, 2014. More than twenty teams of ice and snow sculptors representing the United States, China, Japan and Russia will take part in a 5-day-long competition which starts on Monday, according to the festival organizers. Source: Reuters