A projection of a Syrian refugee girl in Moscow 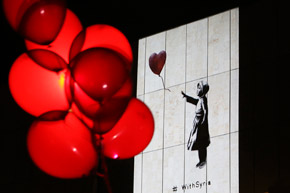 A projection of a Syrian refugee girl releasing a red balloon by artist Banksy, a rework of his "There Is Always Hope" graffiti, is seen at the Central House of Artists in Moscow March 13, 2014. The artist reworked his original creation and showed it in several locations across the world on Thursday to mark the third anniversary of the start of war in Syria. Source: Reuters