Rehearsal for the Victory Day Parade in St. Petersburg 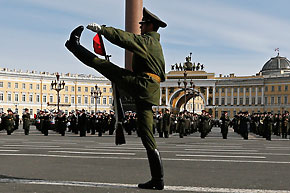 A Russian soldier marches during a rehearsal for the Victory Day Parade in Dvortsovaya Square in St. Petersburg. Russia prepares to mark the 69th anniversary of the Soviet Union's victory over Nazi Germany in World War Two on May 9. Source: REUTERS / Alexander Demianchuk