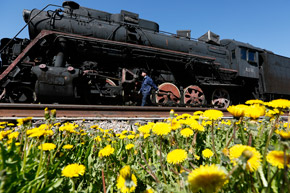 Alexey Isaikin, a mechanic dealing with repair works and maintenance of locomotives, performs a routine check at the regional reserve base of the Trans-Siberian railway near the village of Vagino, west of Russia's Siberian city of Krasnoyarsk, June 10, 2014. These Soviet-made old steam, diesel and electric locomotives, constructed in the middle and second half of the 20th century, are stored at secured premises in operational conditions. In case of emergencies, these locomotives can be used for transportation while steam ones can also be applied as mobile thermal stations as a way to heat up buildings in towns and settlements during Russia's severe winter frosts, according to the official representative of the Krasnoyarsk railway.
Source: Reuters