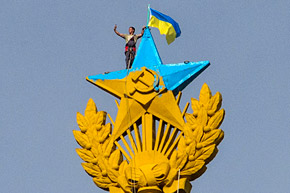 A worker takes a selfie before removing a yellow and blue Ukrainian flag attached by protesters atop Stalin-era skyscraper in Moscow, Russia, Wednesday, Aug. 20, 2014. Protesters on Wednesday scaled one of Moscow's famed Stalin-era skyscrapers and painted the Soviet star on its spire in the national colors of Ukraine. The dangerous prank, which set Russian social networking sites a buzz, drew a harsh response from the police. Source: Ilya Varlamov / AP