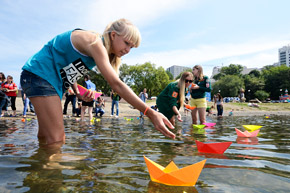 Activists launch paper boats during celebrations for the 69th anniversary of the end of World War Two in the far eastern city of Vladivostok, September 2, 2014. The holiday, marking the victory over Japan in World War II, is a Russian national memorial day, established by then President Dmitry Medvedev and approved by the Russian State Duma and the Federation Council on July 23, 2010. Source: Reuters