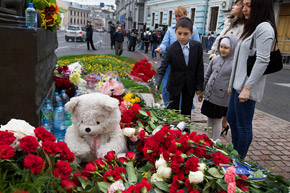 Children lay flowers on a monument in Moscow, on Sept. 3, 2014. A school in Beslan, North Ossetia, was seized by a group of terrorists on September 1, 2004. The siege lasted for 3 days with over 1000 people held hostage. As a result of the attack and the storming of the building by Russian special forces more than 300 people were killed, many of them children. Ten years after the Beslan tragedy Russians gather to commemorate the victims. Source: AP