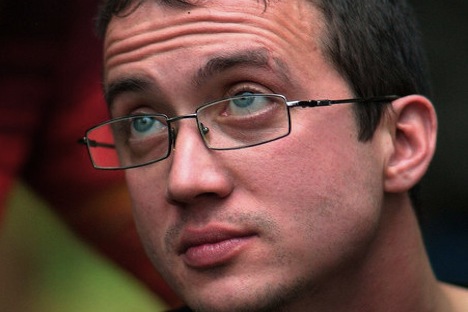 Suspect in the Bolotnaya Square Alexander Dolmatov committed suicide in the Netherlands where he applied for political asylum. Source: vk.com

A suspect in the Bolotnaya Square case committed suicide in the Netherlands where he applied for political asylum. A scanned copy of his suicide note was posted by journalist Oleg Kashin on his Twitter.

A scanned copy of a suicide note left behind by Russian rocket engineer and suspect in the Bolotnaya Square case Alexander Dolmatov before committing suicide in the Netherlands was posted by journalist Oleg Kashin on his Twitter on Friday.

Kashin received the copy from writer Sergei Shargunov, Dolmatov's friend, who says he read the note together with Dolmatov's mother.

"I am at Sasha Dolmatov's apartment. Have just read his suicide note with his mother. He was incited to commit suicide. If only this was suicide. [He] writes he is departing so as not to look like a traitor," Kashin says on Twitter in quoting Shargunov's message.

Kashin says Dolmatov's mother received the scanned copy of her son's suicide note from a lawyer in the Netherlands.

The note consists of several sheets with a handwritten text.

"Dear Mom! I am leaving so as not to return as a traitor and defame everyone, our whole family. Such things happen, please endure this. I am with you, and I know you will endure. This is the best option. Say in Russia that this was just an accident. What drove me to flee Russia is my laziness and slovenliness over which I failed to study the new laws. I betrayed an honest man, and I betrayed my Homeland's security. If it is possible, transfer my body to Russia. Russia is stronger than any other country, and it will only be stronger. Living in Russia [illegibly] better than anywhere else," says the note available on Kashin's Twitter.

Dolmatov, an activist of the opposition organization, The Other Russia, who was prosecuted for involvement in the May 6, 2012 clashes between the opposition and police on Bolotnaya Square in Moscow, left for the Netherlands and asked for political asylum some time ago.

It was reported on Jan. 17 that he had committed suicide after the Dutch authorities denied him refuge.

Minister Plenipotentiary Onno Elderenbosch of the Dutch Embassy in Russia told the media that, judging by Dolmatov's death note to his mother, he had committed suicide not because he had been denied refuge.

Russia earlier demanded that the Dutch government urgently investigate Dolmatov's death in that country. "The moment the news arrived, the Russian Embassy urged the Dutch authorities to start an urgent and exhaustive inquiry," the Russian Foreign Ministry said in a statement on its website on Friday.

The Netherlands' repatriation and deportation service informed the Russian Embassy in The Hague on January 17 about the death of Dolmatov, 36, at a temporary center for refuge applicants in Rotterdam, the ministry reported.

Preliminary findings by Dutch authorities indicated that Dolmatov's death was a suicide, the ministry said. "This issue will remain under the Russian embassy consular service's close control," it said.

The Other Russia leader Eduard Limonov suggested on Friday that Dutch special services could have applied pressure to Dolmatov.

"I suppose Dutch authorities were aware that Dolmatov was a National Bolshevik - and this alone made him an unwelcome foreigner. I also suppose that Dutch special services could have put pressure on him as a leading designer of a secret design bureau dealing with rocketry. These two circumstances made his presence in the Netherlands not all milk and honey, and granting him political asylum was problematic," Limonov wrote on his blog posted on Echo Moskvy radio station's website.

Dolmatov presumed in a June 2012 interview with Gazeta.ru after leaving for the Netherlands that foreign special services might be interested in contacting him.

"Certainly I presume that some questions may arise. But my position is that I have never taken what doesn't belong to me, including information. I absolutely rule out that I could use my knowledge to improve my position here," he said.

Dolmatov preferred not to specify what exactly he specialized in as a leading designer at a Russian defense company.

Denis Solopov, who left Russia for the Netherlands after police started prosecuting him for an attack on the Khimki city administration building about two years ago, told the Public Post web publication that he had maintained contacts with Dolmatov.

"He [Dolmatov] was held in a closed prison for a month after he disappeared," Solopov said. "He stopped responding to contacts at about this time. Then he was transferred to a prison right at the airport. It is from there that he texted, before committing suicide, that he needed a lawyer. It was clear they wanted to deport him."

"Although this was not legally possible," he added. "Perhaps some local bureaucratic formalities were involved… Looks like this all influenced his decision."

"He and I discussed a lot of things," Solopov said. "He worked at a defense enterprise. It is clear that there are no secrets at these enterprises anymore. Sasha said all this Soviet stuff was sold out long ago."

"Nevertheless, there have been precedents in the new Russia when people, who exchanged some information available on the Internet as part of international cooperation, were turned into spies," he added. "Such falsified cases with huge prison terms for high treason are well known."

"FSB [Federal Security Service] officers at this enterprise said he was a spy," Solopov said. "He would have faced a huge prison term if he had returned home: this was an ideal candidate for such a bogus case. He perfectly understood this."

Meanwhile, the Russian Opposition Coordination Council has called on the Dutch authorities to find out the causes of opposition activist Alexander Dolmatov's death in that country.

In a statement that Opposition Coordination Council member Sergei Davidis posted on Facebook, the Council urges the Dutch government "to conduct a careful investigation into the circumstances related to the denial of refuge to Alexander Dolmatov and causes of his death.

"At the same time, the Council insisted that "the Russian authorities that forced him to leave the country are to blame for this man's death."

The Opposition Coordination Council pointed out that some of the participants in the events on Bolotnaya Square left Russia "because of political reprisals related to the May 6 case and are seeking asylum."

"In light of Dolmatov's tragic death, we are urging the Council of Europe, the Office of the UN High Commissioner for Refugees, and international human rights organizations to pay special attention to obvious political motives of the criminal prosecution of the participants in the sanctioned public action on May 6, 2012," it said.