Probe into Russian opposition member's suicide will wrap up in March 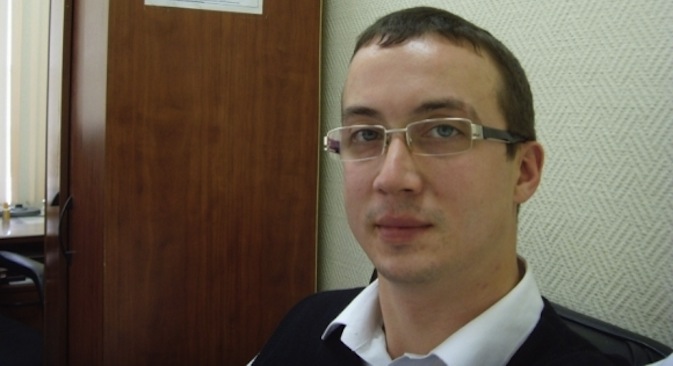 Suspect in the Bolotnaya Square Alexander Dolmatov committed suicide in the Netherlands where he applied for political asylum. Source: moikrug.ru

The Netherlands are conducting four independent investigations into the tragic death of Alexander Dolmatov, who committed suicide in a Dutch detention center after fleeing Russia and seeking asylum abroad.

The body of Alexander Dolmatov, a member of the Russian opposition who killed himself at a detention center in the Dutch city of Rotterdam, will be sent to Russia within the next 10 days. The Netherlands will cover the costs of repatriating the body.

Russian opposition activist might have been driven to suicide, relative says

The investigation into the circumstances of Dolmatov’s death is expected to continue through mid-March.

A suspect in the criminal case concerning mass protests that took place on Moscow’s Bolotnaya Square on May 6, 2012, Dolmatov committed suicide on Jan. 17 at a Rotterdam detention center for seekers of asylum.

At a press conference on Jan. 23, Russian Foreign Minister Sergei Lavrov said that the necessary documents were being drawn up so that Dolmatov’s body could be sent back to Russia: “We have assurances from the Dutch side that, according the existing rules, this procedure should take approximately 10 days.”

Lavrov promised that the Russian side would insist on establishing the truth and stated that the Netherlands Embassy in Moscow also considers this matter a priority.

RBTH has learned from Oksana Chelysheva, a civil rights activist and member of the Finnish-Russian Civil Forum that four independent investigations into the circumstances of Dolmatov’s death are now being carried out in the Netherlands.

These separate investigations are being conducted by the country’s Ministry of Justice and Security, Ministry of Health, police and parliament. Investigations started on Jan. 17 and should finish in mid-March, taking four to six weeks to complete.

“The main thing now is to establish the circumstances and reasons for what happened. No one has any doubts concerning the validity of Dolmatov’s reasons for leaving Russia and seeking asylum,” said Chelysheva, adding that Dolmatov had no thoughts of suicide in the late fall of 2012.

The Dutch Migration Service denied Dolmatov asylum, because the agency thought he would have to pay, at the most, a fine of 500 rubles ($16) for violating administrative rules if he were to return to Russia.

“This decision was taken by a specific official,” said Chelysheva, who is providing legal aid to the Dolmatov family. “And I would be very curious to know where the Migration Service picked up that nice little bit of information, given the number of people officially accused in the Bolotnaya Square case, the hunger strike of jailed activist Sergei Krivov (which has gone on for more than a month now), and the denial of medical care in prison to Vladimir Akimenkov, who is going blind.”

Chelysheva expects that the reason for denying Dolmatov asylum may have been the incompetence of a junior official who was simply ignorant of the real situation in Russia.

The Russian Federation, said Chelysheva, will not spend a kopeck to cover the high cost of repatriating Dolmatov’s body; all costs will be covered by the Netherlands Department of Prisons.

It is, so far, unclear as to whether or not Dolmatov’s mother in Russia will receive any material aid. On Jan. 23, Dolmatov’s mother was visited by a deputy ambassador of the Netherlands Embassy in Moscow – but this was only a personal visit, according to Chelysheva.

The activist also said that, on the day of the visit, Dolmatov’s building and apartment were under surveillance by Russian human-rights agencies fighting extremism.

According to  him, Russia’s Investigative Committee had investigated the circumstances of the Bolotnaya Square case and qualified the actions of participants according to article 212 of the Criminal Code on mass disorders and article 20.2 on administrative violations of the rules for holding demonstrations.

These violations stipulated a fine of 500 rubles, as the Netherlands thought. However, the lawyer agrees with Chelysheva that the real situation in Russia goes beyond an understanding of legal articles.

“I would not rule out the possibility of Dolmatov being arraigned on criminal charges,” said Vishnevsky, noting that political rules of the game could subvert legal rules by turning a criminal law into an instrument of repression.

On the other hand, director of the Institute of Political Sociology, Vyacheslav Smirnov, believes that Dolmatov faced no threats in Russia and fled the country “by accident.”

“It’s really a pity that this personal and, in principle, medical tragedy is being played by opposition leaders as a propaganda card,” said Smirnov.

“The opposition is turning Dolmatov into a martyr, while the pro-Kremlin media are discussing the note he left behind – a renunciation of the opposition and declaration of love for the Motherland,” Smirnov added. “In actual fact, Dolmatov was mixed up and ran away from this world to a world for which he turned out not to be adapted.”

The Dutch authorities, Smirnov supposes, are to blame primarily for not having accorded Dolmatov timely psychological help; instead, they put him in a detention center for extradition.

In discussing the foreign political significance of this scandal, Smirnov did not predict a worsening of bilateral relations with the Netherlands.

“The Russian Foreign Ministry has made no claims against Holland, and is not likely to do so,” said Smirnov. “Now everything depends on the position of the Netherlands, on the conclusions that they come to: will they blame Dolmatov or Russia, which made him afraid?”