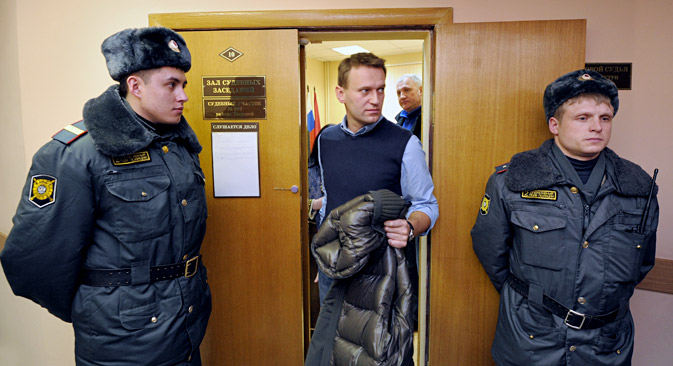 In December, the Investigative Committee announced it was probing Navalny’s role in the privatization of the same vodka factory, in the Kirov region town of Urzhum, in the fall of 2010. Source: Kommersant.

Firebrand opposition leader Alexei Navalny may be linked to the investigation into Nikita Belykh, the head of the Kirov region.

The office of Kirov Governor Nikita Belykh was searched by investigators Tuesday in a probe into the privatization of a local vodka factory, which investigators claim was sold for a below-market price in 2010. Prominent opposition leader and anti-corruption blogger Alexei Navalny, who served as an adviser to Belykh, may be implicated in the case.

“Belykh will be questioned in the current investigation,” Markin said.

The press service of the Communist Party’s Kirov region branch reported earlier Tuesday afternoon that a dacha belonging to Belykh, a former leader of the liberal Union of Right Forces party, was being searched. Belykh was not immediately available for comment.

In December, the Investigative Committee announced it was probing Navalny’s role in the privatization of the same vodka factory, in the Kirov region town of Urzhum, in the fall of 2010. Investigators have not yet specified what role Navalny may have played in that.

Navalny has denied any connection with the case. “The Urzhumsky factory was privatized 12 to 18 months after I left the Kirov region,” Navalny told Interfax in December. He had advised Belykh in 2009.

In a separate investigation, on January 18 Navalny was charged with misappropriating the assets of the KirovLes state-run timber company in the Kirov region in 2009. He faces up to 10 years in jail if convicted. The Investigative Committee has also accused Navalny of embezzling 100 million rubles ($3.3 million) of the Union of Right Forces political party. Navalny and his brother, Oleg, a senior manager at Russian Post, are suspected of fraud and money laundering. Both deny the charges.

The main suspect in the Urzhumsky case so far is the former head of the state property department of the Kirov Region, Konstantin Arzamastsev, who has already been charged with abuse of office when selling the Urzhumsky factory in 2010. Investigators claim the abuse came to light during the probe into misappropriation of KirovLes funds.

According to investigators, Arzamastsev signed an order setting the starting price of 25.5 percent of the Urzhumsky factory’s shares at 95 million rubles ($3.2 million). “The official knew that the factory is one of the most successful and profitable liquor factories not only in the Kirov region but in Russia in general, and the real market price of the state’s share in it was no less than 197 million rubles ($6.5 million),” the Investigative Committee said in a statement. The stake was sold at the starting price. Arzamastsev, who is on the Investigative Committee’s wanted list, is still at large.