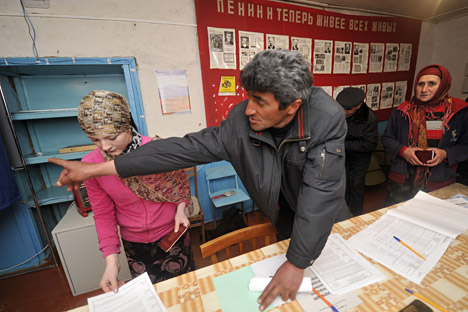 There would be nothing wrong if the Kremlin reverted to the practice of appointing governors in the multi-ethnic republics, according to Alexei Malashenko of the Carnegie Moscow Center. Source: Alexey Kudenko / RIA Novosti.

Nine months after popular gubernatorial elections were re-introduced on the initiative of former President Dmitry Medvedev, a 90 percent majority in the Russian Duma votes “yes” on a bill that gives regional legislatures the right to scrap them. President Putin believes the measure could prevent unnecessary conflicts in the Caucasus republics, but critics say the bill marks a step backward for democracy.

On Jan. 30 the State Duma almost unanimously backed the first reading of a bill that would allow local legislatures to scrap popular elections of governors.

Gubernatorial elections were abolished in 2005, but they were recently restored in April 2012 as part of the package of laws that liberalized the political system. The laws were passed in the wake of mass protests that took place in Moscow and other Russian cities “for fair elections” in late 2011 and early 2012.

The initiative to revise the law was put forward by a group of United Russia deputies in December 2012, later receiving the support of President Vladimir Putin. His main argument in favor of the alternative scheme was that popular gubernatorial elections could upset the uneasy inter-ethnic peace in the multi-ethnic Caucasus republics.

Commenting on the proposed law, the head of United Russia in the State Duma, Vladimir Vasilyev, explained that people in the national republics often vote on ethnic lines or for “their kin,” whereas the members of other nationalities that are the second or third most numerous ethnic groups also claim the right to nominate their candidates for the region’s top job. This is why, in some Russian regions, there is a de facto tradition involving several key posts in the republic being held by members of different ethnic groups.

On the eve of the debates on the bill, the head of the North Caucasus Republic of Ingushetia, Yunus-Bek Yevkurov, spoke in favor of the right to renounce direct elections of regional governors. “The president’s administration would never appoint a good-for-nothing who will work sloppily. There'd be nothing to gain from doing so,” said Yevkurov.

Alexei Malashenko of the Carnegie Moscow Center believes that the federal center should not treat all the Caucasus regions in the same way. “There needs to be a case-by-case approach to every republic. For example, there would be nothing wrong if the Kremlin reverted to the practice of appointing governors in the multi-ethnic republics (Dagestan, Kabardino-Balkaria and Karachay-Circassia); this is better than ethnic strife. But mono-ethnic republics, including Ingushetia and Chechnya, could easily have normal democratic elections,” Malashenko says.

This view is shared by the speaker of the upper house of parliament, Valentina Matviyenko. “Russia is a federated state. One cannot have one-size-fits-all legislation imposed from Moscow on all the regions of the Federation without taking into account the national specificities,” says Valentina Matviyenko. “In the U.S., for example, the states have extensive rights to pass their own legislation, and the laws differ widely. Some states have the death penalty and some don’t.”

During the course of the debates on the bill, Alexei Didenko of the Liberal Democratic Party of Russia (LDPR) argued that the residents of the regions whose legislatures would decide to abolish popular gubernatorial elections would effectively be declared second-rate citizens.

Anatoly Lokot of the Communist Party of the Russian Federation (CPRF) says that, after “democratic elections were restored, even with filters, the latest proposals mark a step backwards.”

“Could somebody please explain to me what on earth is happening at the State Duma? Nine months ago we voted for direct elections and you were telling us that the issue had been thoroughly studied, agreed with the regions and that the protests had nothing to do with it,” says Dmitry Gudkov, a member of the Just Russia party. “Today I would like to know why the concept has changed. What has happened to make some regions unworthy of direct elections of governors? Obviously, the scrapping of popular elections would allow United Russia governors with a low approval rating to stay in power.”

Vice chancellor of the Plekhanov Russian Economics University and member of the Public Chamber, Sergey Markov, compares the bill with travel insurance that people take out but do not expect ever to use. “Such insurance may be very helpful at a critical moment. The chance to choose a different model ensures against destabilization at a time when such destabilization may become very real,” says Markov.

Vladimir Pligin, United Russia chairman of the State Duma Constitutional Legislation and State Development Committee, says that, if adopted, the law could be used as early as the Single Voting Day this upcoming September.