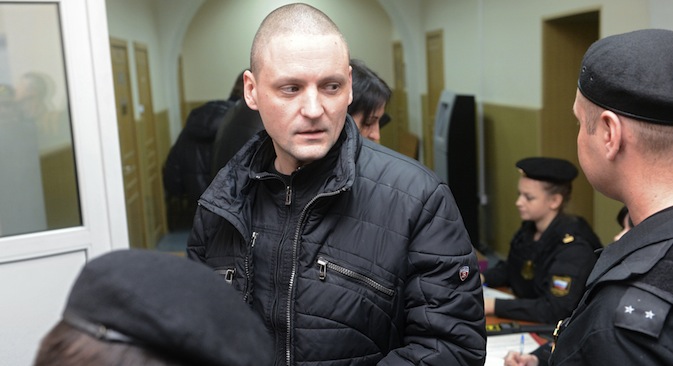 The opposition activist is expected to stay under house arrest until April 6, the deadline for the investigation of his case.

He was to be escorted to his apartment, which he now cannot leave without official permission. He cannot have contacts with anyone other than members of his family, lawyers, investigators and officials from the Federal Penalty Enforcement Service. Nor can he use a telephone or the Internet, or send off or receive letters.

According to the court, Udaltsov was put under house arrest because he had been breaking the rules of his previous restricted travel status and argued that the activist might go into hiding, keep pursuing illegal activities he is accused of, threaten witnesses, destroy evidence or resort to any other form of obstruction of justice.

The court said it had taken into account Udaltsov's age and health condition and the fact that he has little children in issuing its order.

The investigators also argued that, unless put under arrest, Udaltsov might use his contacts with human rights organizations and government officials to misguide the criminal action against him.

Udaltsov's prosecution is part of a criminal case where two others are accused of co-organizing mass riots. They are his assistant Konstantin Lebedev and Left Front activist Leonid Razvozzhayev, who is an aide to State Duma Deputy Ilya Ponomaryov. Lebedev and Razvozzhayev have been in detention for months.

Udaltsov is maintaining contacts with leaders of human rights organizations and other acquaintances in Russia and abroad, according to the investigators.

"Udaltsov's foreign travel passport has not been confiscated," an investigator said, suggesting that the suspect might flee if left free.

Another argument in favor of placing Udaltsov under house arrest is the gravity of charges pressed against him, which carry from 4 to 10 years' imprisonment, he said. If remained at large, Udaltsov may meet with unidentified accomplices or otherwise affect the investigation, he said.

Furthermore, Udaltsov already has a court case on his record, having been fined 35,000 rubles on an assault and battery charge, the investigator said.

The investigation concluded that Udaltsov's testimony confirms his plans to try to arrange mass disturbances.

"Udaltsov's guilt has been confirmed by testimony by witnesses and Udaltsov himself and by video and audio materials," an investigator said at Moscow's Basmanny Court in rationalizing the investigation's request that Udaltsov be placed under house arrest on Saturday.

While remaining free, Udaltsov may continue implementing his designs, which were not put into practice for reasons not depending on him, the investigator said.

The investigator also argued that law enforcement agencies possessed information indicating that Udaltsov had conflicts with his wife and threatened her, which prompted her and their two children to go to Ukraine.

Udaltsov's contacts with human rights defenders and the suggestions that he may continue pursuing illegal activities, "while he has not yet been found guilty of committing any crime," should not serve as a reason for tightening his pretrial restriction measure, one of Udaltsov's lawyer said. He described his prosecution as politically motivated.

Udaltsov himself claimed that since travel restrictions were imposed on him he had permanently been living at his registered address and there had only been one or two nights he had not spent at home.

"I always answer the phone, I've got the numbers of the investigators written down in large figures," Udaltsov said. "Though I deny being guilty and I do not consider my charges to be legitimate, I am ready to continue to comply with my restricted travel status, and I ask the court to keep this status in effect."

The opposition activits added that house arrest would deprive him of his living because he would be unable to work. He explained that he is officially employed as an assistant to his lawyer Violetta Volkova.

On Friday, Russian Investigative Committee spokesman Vladimir Markin told Interfax that Udaltsov had "repeatedly violated" his restricted travel status, that "he has failed to live at his registered address for long periods, has been disconnecting his telephones, and has failed to notify investigators about his whereabouts."

Markin said that, moreover, Udaltsov had continued to take part in unauthorized public opposition events in breach of his status.
For example, the activist took part in an unauthorized procession on October 27, 2012 and was penalized for it. On December 15, 2012 police detained him during an opposition rally in central Moscow and gave him an "admonitory interview," Markin said.

"During a mass opposition event in Moscow on January 13, 2013, Udaltsov was staging various kinds of provocations and urging participants in the procession to hold protests indefinitely," the spokesman said.