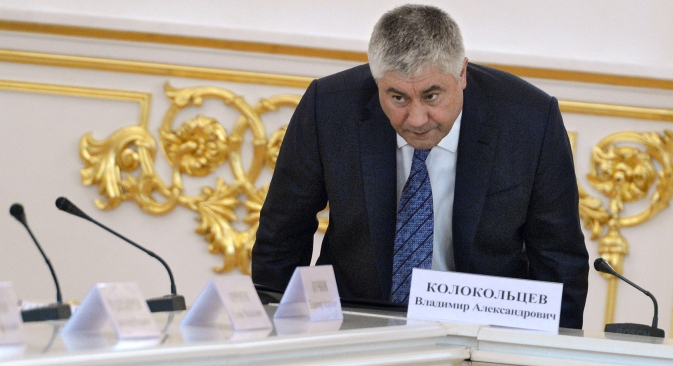 Russian Interior Minister Vladimir Kolokoltsev: "I may incur anger from opponents of the death penalty. But as a citizen, not as a minister, I don't think it would be wrong to exercise this punishment for such criminals." Source: Kommersant

After the Russian Interior Minister Vladimir Kolokoltsev's statement about a possible restoration of the death penalty, both human rights activists and government officials are speaking up to oppose the controversial initiative.

Russian Interior Minister Vladimir Kolokoltsev's opinion about the restoration of the death penalty didn't meet any support from both human rights activists and government officials.

"I may incur anger from opponents of the death penalty. But as a citizen, not as a minister, I don't think it would be wrong to exercise this punishment for such criminals," Kolokoltsev said in an interview with NTV on Sunday.

The minister commented on the killings of girls in Tatarstan and the Irkutsk region and the presumption of the program anchor that restoration of the death penalty had become a subject of frequent public debate.

The Russian Constitutional Court ruled on November 19, 2009, that Russia shall not have the death penalty even after January 2010 when jury trials were endorsed in all regions of Russia. The court order banned the death penalty.

Restoration of the death penalty in Russia is not a practical question, a source in the Russian Presidential Administration told Interfax on Monday.

The Presidential Administration "is not commenting on the statement made by Kolokoltsev especially as he has stressed this is his personal opinion," he said.

Presidential press secretary Dmitry Peskov also abstained from detailed comment. "No initiative has been made; this is not an occasion to declare a standpoint," he replied to the Dojd channel question.

The interior minister emphasized that he was expressing a personal opinion, Peskov stressed. "He accentuated his point, so any discussions would distort his words," the press secretary said.

Meanwhile, Russia's oldest human rights activist and head of the Moscow Helsinki Group Lyudmila Alekseyeva says that the death penalty can only be re-introduced in Russia if the "iron curtain" returns. Officials' private opinion on the matter should not contradict the norms of constitutional law and international obligations, she added.

"We can't re-introduce the death penalty because it would necessitate our withdrawal from the Council of Europe and our international isolation from the modern world, which is bad not only for our economy, but also for the very existence of the country in the modern global world," Alekseyeva told Interfax.

"We can't exist under an 'iron curtain' like we did under Stalin. It's interesting what holes we will make in the iron curtain to send oil and gas there, get money for them, and put money on private accounts abroad," she said, commenting on the statement made by Interior Minister Vladimir Kolokoltsev on NTV television saying that he, as a citizen, does not see anything wrong in re-introducing the death penalty for brutal crimes.

"I may incur anger from opponents of the death penalty. But as a citizen, not as a minister, I don't think it would be wrong to exercise this punishment for such criminals," Kolokoltsev said on an NTV program that broadcast to the eastern regions of Russia on Sunday evening, commenting on the reports about the murder of girls in Tatarstan and the Irkutsk region and the statement made by NTV journalist Pozdnyakov, who said the public has been increasingly in favor of restoring the death penalty.

Alekseyeva said the minister "should not have made that statement."

"According to our international obligations, which our Constitution puts above our laws, there should be no death penalty in the country. For this reason, any official, regardless of his convictions, should publicly state just that," she said.

The human rights activist reiterated that she is an ardent opponent of the re-introduction of the death penalty, saying she believes the Russian judicial system is not ensured against errors when such decisions are made.

"It's a crime to kill any person, no matter who commits it, a private individual, who is regarded as a criminal from a general viewpoint, or the state. If the state does it, it devaluates human life in the eyes of its citizens from an early age and, consequently, increases the level of violence in society not only by the state, but also in the head of every citizen as regards all others," Alekseyeva said.

Likewise, State Duma speaker Sergei Naryshkin does not support the idea of reviving the death penalty.

"My attitude to execution as a form of punishment is negative," he said.