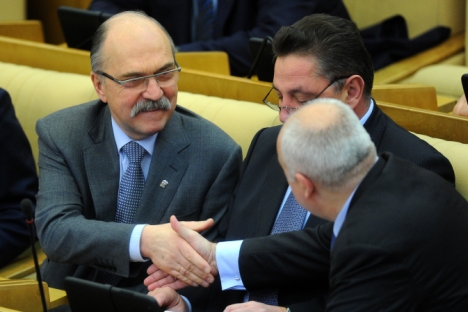 Lawmakers no longer hesitate to strip colleagues of their parliamentary immunity from criminal liability.

Experts say the State Duma opened a Pandora’s Box in the form of an anti-corruption campaign, after fellow deputies stripped Gennady Gudkov of his parliamentary seat in fall 2012. With that precedent set, no deputy’s parliamentary immunity or seat is safe now. Thus, the current parliament is rife with corruption accusations leveled at several deputies.

Russia’s current parliament may very well go down in history: Never before has a Duma had so many accusations leveled against its deputies for violations of the law. Accusations run the gamut — from illegal entrepreneurship, to hiding property, to gross fraud.

Deputies raising the suspicions of law enforcement agencies have been increasingly losing their parliamentary immunity. Some have even had to resign from their posts.

Ironically, even Vladimir Pekhtin — head of the parliamentary commission on ethics and a prominent member of the United Russia ruling party — fell victim to a corruption scandal. After the famous Russian blogger and opposition politician Alexei Navalny claimed that the lawmaker owned real estate in Florida, Pekhtin was forced to announce that he would be vacating his parliamentary seat.

Navalny cited documentary evidence to accuse Pekhtin and his son, Alexei, of owning two apartments in Miami, as well as a house and a plot of land on Ormond Beach worth $2.2 million. None of these properties were listed on the deputy’s official property declaration, which he and his family members are required to file annually.

Navalny’s mudslinging blog-post was shared more than 10,000 times on the Internet, garnering 3,100 likes on Facebook and more than 2,000 re-tweets.

Pekhtin denied all allegations and has since asked the relevant Duma commission to look into his case to see if he is guilty of any wrongdoing. Nonetheless, he was eventually forced to resign.

According to his fellow party members, the former deputy is planning to travel to the United States to prove that the properties there do not belong to him.

On February 12, 2013, Russian President Vladimir Putin submitted to the State Duma an anti-corruption bill prohibiting state officials from owning foreign bank accounts and holding securities abroad. State Duma deputies had already passed their own version of the bill in the first reading and were preparing it for a second reading. The president’s version will now take priority. Among other things, it does not contain a ban on owning real estate abroad. Officials will only be required to make the information regarding such properties (and the sources for its acquisition) transparent.

The deputy’s real estate scandal is just one of many similar stories, albeit the most high-profile.

Almost simultaneously with the Pekhtin scandal, opposition politicians Konstantin Shirshov of the Communist Party and Oleg Mikheev from A Just Russia were stripped of their parliamentary immunity at the request of the Prosecutor General’s Office. Shirshov is suspected of attempting to sell a seat in parliament, while Mikheev stands accused of failing to repay a large loan he helped obtain.

Both lawmakers deny any wrongdoing.

Parliamentary immunity guarantees that State Duma deputies can only be held criminally liable with the State Duma’s consent.

Gennady Gudkov, a prominent member of the opposition and A Just Russia representative, was stripped of his status last autumn, after law enforcement agencies accused him of illegal entrepreneurship. United Russia deputy Alexei Knyshov was suspected of the same violation and left the Duma voluntarily soon afterward.

Experts believe the deputies themselves are to blame for the campaign unleashed against them after the expulsion of Gudkov.

“There were bound to be some repercussions for the State Duma following the Gudkov incident,” says Alexei Mukhin, general director of the Center for Political Information.

These situations do, however, have different origins, he added. The Pekhtin scandal is the opposition’s response to the “screw tightening” by the ruling party, while Shirshov and Mikheev fell victim to intra-party squabbles within the State Duma.

The vice president of the Center for Political Technologies, Alexei Makarkin, agrees: “Although Gudkov paved the way for the possibility of prosecuting lawmakers, the three latest cases are not linked.”

“The sixth Duma showed from the outset that parliamentary immunity could no longer be taken for granted. Deputies used to balk at letting their peers go, even if the culprit belonged to a different political party. There was an understanding that everybody should band together and that lifting the immunity of any one deputy would put the others at risk too. But the expulsion of such a prominent politician as Gudkov has opened Pandora’s Box,” says Makarkin.

“A ‘permissibility factor’ has since been at play: if you can get rid of one deputy, then why not another?” Makarkin says. Various players have started using this to their advantage.

Prosecutors have long been gathering evidence against certain politicians, and now is the time to put it to good use. Unable to achieve the dissolution of the Duma, the opposition has decided to knock deputies off one by one, Mukhin contends.

Both experts agree that this is not the end of anti-corruption efforts within parliament. “Many deputies will soon come to regret the fact that they voted to strip Gudkov of his mandate — for this is what created this precedent in the first place,” says Makarkin.