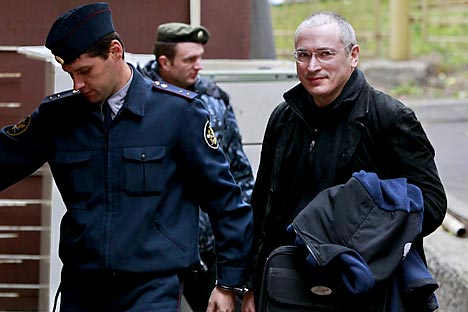 The only politician that (maybe) speaks for “normality” of the new conservatives is the jailed political prisoner Mikhail Khodorkovsky, with his distinct blend of firm convictions and a pragmatic political attitude. Source: Andrey Stenin / RIA Novost

The harbingers of a modern Russian conservative movement are 30 to 40-something intellectuals and entrepreneurs who are tired of Putin’s policy on the one hand, but are reluctant to trust the opposition on the other.

Last Thursday, a group of leading Russian academics, think tankers and journalists got together in the hall of the Higher School of Economics in Moscow to discuss the very topical subject of “Russian conservatism.”

Few things excite the Russian public opinion more these days than the desire to figure out whether such a thing as “conservatism” exists in Russia at all, and if so, who represents it? Is it Vladimir Putin with his not-so-unique blend of “great power” rhetoric, paternalism and quasi-Victorian social mores, combined with a very modern materialism? Or is it the Russian Orthodox Church (although its hierarchy’s recent positions are all but indistinguishable from those of Putin)? Or is it the nationalist opposition?

The esteemed participants, many of whom are friends, could not come to a definitive conclusion. A moderate nationalist philosopher Boris Mezhuev claimed that “Russian conservatism” is based on three main ideas: the sacredness of state sovereignty, territorial integrity and a balance of social and economic trends, neither too “capitalist” nor too “socialist.”

“I’d call it a Russian version of French Gaullism,” Mezhuev said. In his view, Vladimir Putin definitely represents these three things in the eyes of a very large chunk of the Russian population, and is hence a Charles de Gaulle-like figure for the country. Famous journalist and military analyst Alexander Golts disagreed. ‘The nature of the relationship between president Putin and his support base has little to do with Gaullism. It can be summed up by the slogan ‘We are for you, as long as you feed us,’” said Golts.

It is interesting that Gaullism got a mention. The Russian Constitution of 1993 indeed borrows a lot from that of the Fifth Republic in France. However, Gaullism was not only about personal leadership, but also about rebuilding state institutions after a major political crisis. De Gaulle was a staunchly Catholic social conservative, a firm believer in such things as personal responsibility, honor and integrity. However, his preferences for governance were rather statist and his economic views were rather vague. He was hardly an ardent free market fan – an important element of modern Western conservatism, especially in the United States, where this brand remains the most distinct and most influential.

Vladimir Putin had a chance to become a Russian de Gaulle – if in his first two terms he had set about renewing and reenergizing the institutions he inherited from Boris Yeltsin’s turbulent époque. However, his preferences lay elsewhere – primarily in replacing the 1990s oligarchs with a new brand of bureaucrat billionaires and reviving Russia as a “great power.”

Both projects were to a large extent successful, but had little to do with modern conservatism, which is very much focused on individual responsibility, a relatively small government and the idea of choice constrained by the moral imperatives of the Judeo-Christian civilization. For example, it is not enough to be, say, anti-gay marriage and pro-church to be able to call oneself a “conservative.” In this respect, the Kremlin’s newly found conservatism is a rather vague brand, as it is heavily based on paternalism in the economy and limited (if any) trust in an individual.

That is not to say that there is no hope for developing a modern conservative movement in Russia. It has started to take form in the last couple of years. Its harbingers are 30 to 40-something intellectuals and entrepreneurs who are tired of president Putin’s policy on the one hand, but are reluctant to trust the hysterical opposition on the other. They cringe when the latter decries the Russian leader as a “fascist” and calls for Russia either to turn itself into a bleak copy of an EU-style super secular state or to apply left-wing redistribution policies.

These people are usually well-off and educated and know how to make decisions in their professional and private lives, but many of them are also religious and are strong supporters and participants in volunteer and charity activities. A lot of these people tend to read websites like Pravoslaviye i Mir (Orthodoxy and the World) – one of the leading forums for intellectual Christian debate in Russia. These people strongly feel the need for new Russian and Orthodox identities, but are put off by the excesses of rabid nationalism. In short, these are “normal” middle-class people – Western, or, even more precisely, American style. They do not have a party that represents them today. And the only politician that (maybe) speaks for their “normality” is the jailed tycoon-turned-political-prisoner Mikhail Khodorkovsky, with his distinct blend of firm convictions and a pragmatic political attitude.

These “new conservatives” are probably more numerous than many tend to think. At least ten years ago, such a socio-political type did not exist at all. It may take a few years to get in better shape. But I am convinced it is “coming to the polling station near you” in a very close future.