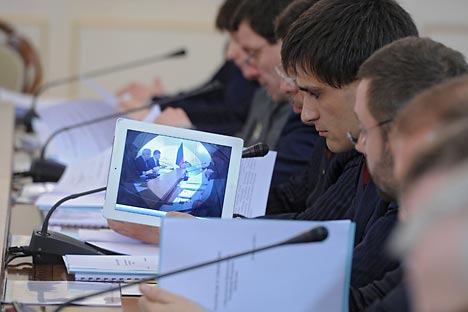 Russian justice officials seem to have displayed too much zeal this month, tossing a Kremlin statement into the state registry of extremist materials and stirring up criticism that some of the government’s anti-extremism efforts are misguided and ineffective.

The text in question is an August 2011 news release from the Russian president’s official website, reporting a military honor conferred by then President Dmitry Medvedev on a special forces brigade in southern Russia.

The news item was reprinted, almost verbatim, by a newspaper called Radikalnaya Politika in its September 2011 issue, which was ruled extremist by a Siberian court last fall, according to the Federal List of Extremist Materials posted on the Justice Ministry’s website.

The Kremlin reprint, entitled “Congratulations from the President,” was specifically named among the articles in the offending issue, added to the Justice Ministry’s list on February 19, according to Sova, a Moscow-based nongovernmental watchdog group that monitors extremism and xenophobia.

Other materials in the issue included headlines from major news agencies, a political flyer from the historic Russian coup attempt of August 1991 and a smattering of articles from Russia's famous Ogonyok magazine.

Theoretically, this means that all online outlets displaying these materials must remove them. In the case of the Medvedev news item, this would include the Russian president’s official website, Kremlin.ru, and the ruling United Russia party’s website. Otherwise, Russia's telecoms watchdog, Roskomnadzor, could demand the sites be shut down.

The Justice Ministry declined to comment on the effectiveness of its list of extremist materials when contacted by RIA Novosti on Thursday. The ministry said in a statement that it was “obliged” to include materials deemed extremist by courts in the list.

A spokesperson for Roskomnadzor had not responded to a query as to whether the Kremlin.ru or United Russia websites would be ordered to remove Medvedev’s speech as of late Thursday afternoon.

The editor of the Radikalnaya Politika paper, Boris Stomakhin, was arrested late last year and charged with publishing extremist material, including calls for terrorist acts. He is currently awaiting trial.