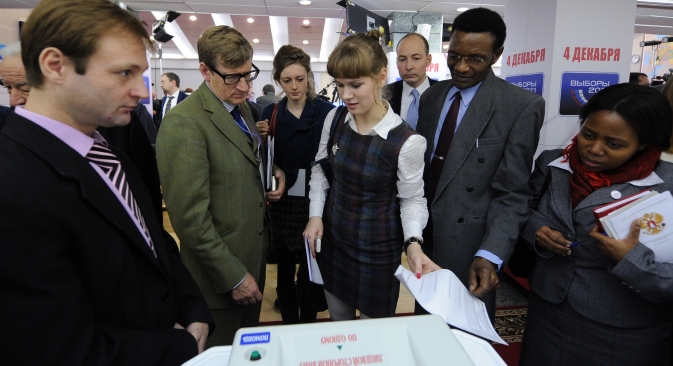 Russian President Vladimir Putin has proposed a new bill that will prohibit foreign citizens and international organizations from influencing the election outcome in Russia.

A new bill on the State Duma elections is expected to impose further restrictions to the work of international observers during Russian parliamentary campaigns. The bill would also prohibit Russian parties from forming electoral blocs and, at the same time, reduce the threshold for parties running in the elections from 7 to 5 percent.

Russian President Vladimir Putin submitted a new version of a bill on parliamentary elections to the State Duma on Friday, a spokesman for the chamber's executive office told Interfax.

The bill, drafted by the Central Elections Committee, was widely debated and discussed, including by parliamentarians and members of political parties not represented in the State Duma.

The bill on the State Duma elections prohibits foreign citizens and international organizations from influencing the election outcome in Russia in any form.

The procedures governing the involvement of foreign (international) monitors in the monitoring of the preparations for and organization of State Duma elections are established by international treaties, this law and other legislative acts.

The norms of the bill governing the activities by foreign monitors in Russian elections provide that they "have the right to publicly state their opinion on Russian legislation on elections, the preparations for and organization of State Duma elections, hold press conferences, and talk to the media only after the voting is over on the entire territory of the Russian Federation."

The bill also provides that "foreign (international) monitors have no right to use their status to conduct activities not related to the preparation for and organization of State Duma elections." If monitors violate "the generally accepted principles and norms of international law, the present federal law, and other federal laws," the Central Elections Commission has the right to revoke their accreditation.

In addition, the bill envisions the nomination of candidates by parties and their self-nomination.

"Candidates in the State Duma elections are nominated directly and by federal lists. Direct nomination of candidates can take place by self-nomination and nomination by political parties," according to the bill.

The bill also reduces the threshold for parties running in State Duma elections from 7 to 5 percent.

"Following elections in federal electoral districts, parliamentary seats will be distributed among candidates who have won at least 5 percent of the vote," the document says.

At the same time, the bill does not allow Russian parties to form election blocs.

Furthermore, political parties and candidates in the State Duma elections will lose part of the free airtime to which they are entitled if they refuse to take part in televised debates.

The unused time from televised debates can currently be used for the publication of electoral campaigning materials.

Meanwhile, the leaders of the Russian Communist Party have criticized the bill.

"This bill does not permit the establishment of election blocs, which means that United Russia and the current authorities are panicky about the possibility of their political opponents growing stronger if they form such blocs," MP Valery Rashkin, deputy chairman of the Communist Party Central Committee, told Interfax.

A proposal to elect half of State Duma members based on party lists and the other half in single-seat districts "indicates that the ruling party realizes that it has lost its authority among voters and will not be able to win the required number of votes at the next elections. Apart from that, it will be easier for the authorities to take advantage of their administrative resources in single-member districts."

Likewise, The Russian Liberal Democratic Party (LDPR) expressed their indignation about the bill.

"We don't support the idea to return to the mixed election system, because we consider it a step back in the development of the political system in the country," said Igor Lebedev, the head of the LDPR Supreme Council.

According to Lebedev, the return to the mixed election system was beneficial primarily for the United Russia party.

"The ruling party is trying to preserve its majority in the parliament in such a way, because it is much easier to get the majority at the single mandate elections than at the elections by party lists," he siad. "We suppose that the steps taken in the past 10 years to advance parties in the country have led to a basically new election system, by party lists. This meant development and now it's either a stop or a step back," Lebedev said.