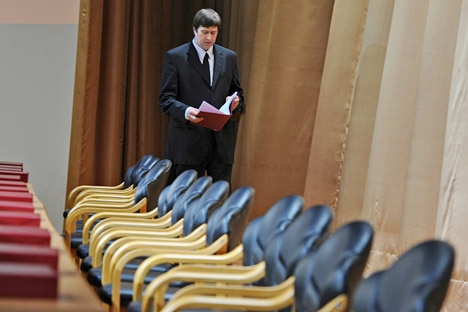 The Ministry of Justice: An NGO financed from abroad may be put on the list only if there is strong evidence that it is engaged in political activities. Pictured: Russian Justice Minister Alexander Konovalov. Source: Kommersant

Despite a recently passed law regarding foreign-funded NGOs and a number of received appeals to declare some well-known organizations as “foreign agents,” the deputy director of the Minister of Justice’s NGO affairs department explains why no organization has yet to officially fall into this category.

Activist fears that the “law on foreign agents” passed in 2012 would make the work of nongovernmental organizations (NGOs) impossible have proven to be unfounded. As of yet, the Ministry of Justice has not put a single NGO working in Russia on the list of “foreign agents.”

The law will not be applied formally and every case will be considered on its merits, so as not to damage the business reputation of an NGO by unreasonably labeling it “a foreign agent,” said Tatyana Vagina, deputy director of the Ministry’s department for NGO affairs.

A source at the Ministry of Justice told RBC Dailythat an NGO financed from abroad may be put on the list only if there is strong evidence that it is engaged in political activities and seeks to change government policy.

The law on NGOs that came into force in November 2012 makes it mandatory for Russian NGOs receiving financial support from foreign countries, international and foreign organizations and engaging in “political activities” to register as “foreign agents.”

The deputy director of the NGO affairs department noted that the Ministry of Justice recently received 120 appeals on its site asking that the Golos association — which monitors elections — be declared a foreign agent. It also received 350 similar appeals regarding the well-known sociological research organization, the Levada Center. However, the Ministry struck down the proposal to hold unscheduled audits of these NGOs.

“Citizens have the right to inform the Ministry of Justice about organizations that might be included in the list of foreign agents, only if the organization displays features of a foreign agent, and if it is involved in extremist activities. So, a citizen who walks past the Ministry of Justice and decides to write an appeal cannot initiate an audit of an NGO,” said Vagina.

The deputy director noted that there are some signs to indicate these appeals have been prompted from outside, “because they have been sent by email and give no contacts.” Vagina did not, however, say who might have initiated the complaints.

The Ministry of Justice also turned down six petitions from State Duma deputies that were filed within the first 100 days of the law coming into effect.

“The Ministry of Justice has stayed out of the populist wave and is following the legal path, which is very heartening; but if the Ministry changes its position, then the law could be an instrument for bringing pressure on NGOs,” Public Chamber member Darya Miloslavskaya told RBC Daily.