Putin plots to avert a crisis while retaining power 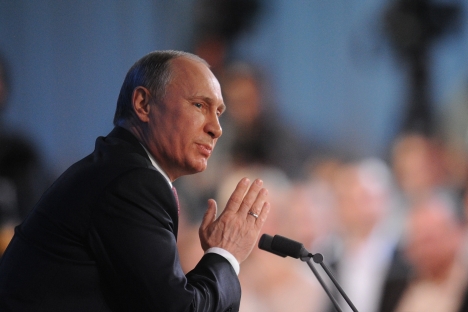 Putin would like to pre-empt a political crisis by introducing new rules in the political game. Source: ITAR-TASS

The parliament’s legitimacy in the eyes of the majority of the population is close to zero. This “illegitimacy” is hurting the executive branch and the president personally.

Vladimir Putin is preparing to set a new political scenario in motion. His decision to reinstate the Boris Yeltsin-era general elections legislation is the biggest sign yet that the 2011 and 2012 protests had a profound impact on the Kremlin, and that Putin himself would like to pre-empt a political crisis by introducing new rules in the political game.

The president could have waited until 2015 to introduce new legislation: the next Duma elections are not due before December 2016. But he decided to do this right away. This probably means that Russia is in for an early general election, possibly soon followed by an early presidential poll. There is certain logic behind this decision.

The current Duma is undoubtedly a convenient tool to rubber-stamp decisions taken by the Kremlin. However, it was elected in a blatantly unfair fashion, sparking the 2011 and 2012 protests. Moreover, too many MPs have been involved in corruption scandals over the course of the last 13 months. More scandals are sure to follow soon, increasingly embarrassing the political regime as a whole.

The parliament’s legitimacy in the eyes of the majority of the population is close to zero. This “illegitimacy” is hurting the executive branch and the president personally.

Putin’s electoral rating continues to fall. According to poll data released by the respected Levada Center, if presidential elections were held tomorrow, no more than 32 percent of the voters would cast their ballots for him. It is impossible for Putin to pretend that nothing is going on. His decision to mothball the election system he himself introduced in 2004 and to go back to the 1990s model could signify that he has decided to further disengage himself from the thoroughly compromised United Russia (which, in his view, will continue to serve the Kremlin’s interests anyway) and launch a new support platform for himself – the so-called United Popular Front (UPF).

Until recently, UPF was a loose grouping of mostly provincial and government-linked organizations, businesses and personalities, professing conservative values, profound anti-Westernism and anti-intellectualism. It claims to speak on behalf of “the real people,” and not the “spoiled” and well-off big city dwellers.

With the old new electoral system, United Russia will fight for the 225 Duma seats allocated to parties, while UPF candidates will compete for the 225 seats set aside for independent candidates. With local governors and assemblies still largely in the hands of pro-Putin forces, it is likely that if the general election were held this year, the Kremlin would remain in control of the legislature.

Putin may well decide to move to parliament, and, as head of the biggest faction, to become its chairman. In these circumstances, an early presidential election would be in order.

In the current political climate and with the opposition still lacking coherent policies and nationwide leadership, it is still possible to imagine that someone Putin trusts, for example the current Defense Minister and long-time emergencies tsar Sergei Shoigu, would win even in an honest contest.

Of course, Vladimir Putin would still like to open the Winter Olympics in Sochi in early 2014 himself, but after this, all bets are off as far as the presidential vote is concerned. Moreover this scenario has to be realized before October 2014, when Mikhail Khodorkovsky, the Kremlin’s most vocal, seasoned and dangerous opponent, is expected to be set free. I think Russia is heading toward rough political waters again.