Russia’s regions go back to the streets to protest 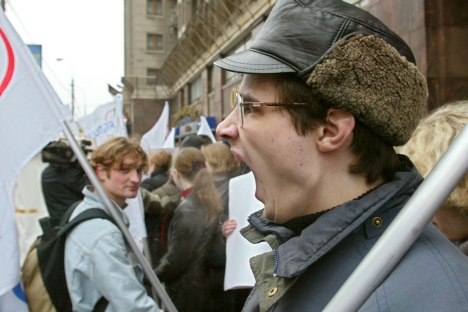 Russians take to the streets to protest against the rise of utility rates. Pictured: An activist of the opposition Yabloko party protesting against an increase in utility rates. Source: Kommersant

While Moscow's street politicians take a breather, experts observe a rise of social activity in the Russian regions. In contrast to the capital, the demands of the Russian hinterland are social rather than political.

In its monthly analytical ranking of social and political stability in the Russian regions, the St. Petersburg Politics Foundation noted a marked revival of social activity in the provinces, against a backdrop of diminished political protest in the Russian capital. The reason is a sharp rise in utility costs in several regions in the first months of this year.

For example, St. Petersburg has seen a 40 percent jump, but the biggest leap was observed in Murmansk Region and the Republic of Altai, where some municipalities have been hit by a 225 percent hike. Overall, housing and communal services in February 2013 are 9.8 percent more expensive than in February 2012, according to the Federal State Statistics Service.

Still, the authorities were not slow to respond. President Vladimir Putin called for lower utility rates in regions where they had risen without justification. In several regions, senior officials responsible for housing and utilities have been dismissed.

As suggested by the president of the St. Petersburg Politics Foundation, Mikhail Vinogradov, the potential for conflict remains high.

"The experience of social unrest shows that it suddenly breaks out and subsides just as quickly. The authorities are alarmed but don't know what action to take, since the housing and utilities sector is ungovernable and there is no clear understanding of how tariffs are set," says Vinogradov.

According to the All-Russian Public Opinion Research Center, most Russian citizens consider utility rates to be the main problem in the country.

Experts disagree on whether the protests against rising bills will morph into political demands, as they did during the rallies in Moscow in the winter and spring of last year.

"It is primarily a social phenomenon for the time being. But the next step could be a protest against the authorities, which are incapable of controlling household bills," says a member of the political party A Just Russia and head of the State Duma Committee for Housing and Utilities, Galina Khovanskaya.

The head of the Social Policy Center of the Institute of Economics under the Russian Academy of Sciences, Yevgeny Gontmakher, is convinced that the social protest will not take on a political dimension.

"A political protest occurs when there is an organized political force trying to convey a civilized message. In this instance, the forces at work are more elemental," Gontmakher says. "The wave of protest could bring down the local elites, but who will replace them? After all, they could be dilettantes swept into power on a tide of cheap populism."

The director of the Center of Political Sociology, Vyacheslav Smirnov, imagines that the social protest in the regions will be directed toward specific officials or conflict situations.

"Even if it comes to blows — which cannot be ruled out — the government will get off lightly because the people are not looking to change the system, just to get justice," he says.

The head of the St. Petersburg Politics Foundation believes that the direction of the social protest will be clear by spring.

"It usually happens that the sun appears, people head off to their dachas, and all the street activity slackens," says Vinogradov.